Flavor File: Cool Off At Raspa Fest And Head To Hot Joy For Brunch 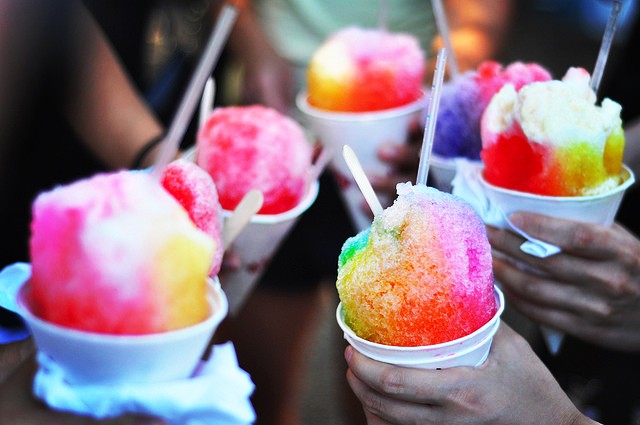 So many great chances to eat this week — let’s get started.

Hot Joy (1014 S. Alamo St., 210-368-9324) will ditch lunch service in favor of brunch starting on Saturday and Sunday. The pan-Asian eatery is rolling out a new menu as well, though fans of migas fried rice and twice-fried wings can keep calm — those two items aren’t going anywhere. Expect to find new dishes inspired by chef Quealy Watson’s trip to Asia earlier this year, such as honey sesame chicken with butter biscuits and chives, South Texas Heritage Pork with Thai red curry, green jackfruit, kaffir lime, coconut and chilies and a new Cajun-tinged tsukemen ramen that combines gumbo jus, pork belly, smoked sausage, pickled okra and green onion. Brunch, on the other hand, will pack in Asian twists on Texas and Louisiana influences. On the drink front, Elisabeth Forsythe is adding tableside cocktails out of a wee bar cart for $3.

Vegan and gluten-free fare is heading just south of downtown as Viva Vegeria (1422 Nogalitos) open its doors on Monday. Fans of sister location Vegeria can look forward to upgraded and expanded digs, as the former home of The Burger Spot can seat up to 100 people.

Francophiles can dine al fresco at the San Antonio Museum of Art (200 W. Jones Ave., 210-978-8100), which welcomes a pop-up by La Boulangerie. Owned by the Nykiel family, the pop-up is an extension La Boulangerie’s 207 Broadway location. Expect pastries, quiche, omelets, baguette sandwiches and a fun view of the San Antonio River. The shop inside the museum will run 10 a.m. to 4 p.m. Tuesday-Saturday.

Don’t forget to get your Raspa Fest 2015 tickets. The event, Saturday at 10 a.m. at Rosedale Park (340 Dartmouth St.) will feature live music, a raspa-eating competition, food vendors and more as hosted by Big Daddy’s Eats & Treats.

Starting Saturday, you’ll have your pick of more than 70 restaurants to visit through August 29 as Culinaria’s Restaurant Week kicks off. The restaurants will be broken down into two tiers, offering two prices levels ($10/$25 and $15/$35) for three-course meals.

And in even more brunch news, Restaurant Gwendolyn (152 Pecan St.) will host three of its former line cooks over for a pop-up on Sunday, August 23, from 10 a.m. to 3 p.m. The menu, crafted by Dave Rizo, Asheley Draffan and Rafael Mendez, looks tight and includes pork okonomiyaki (a Japanese veggie pancake), Nutella and banana French toast, a Reuben crêpe and a spin on biscuits and gravy that combines rosewater biscuits, lamb sausage and garam masala gravy.