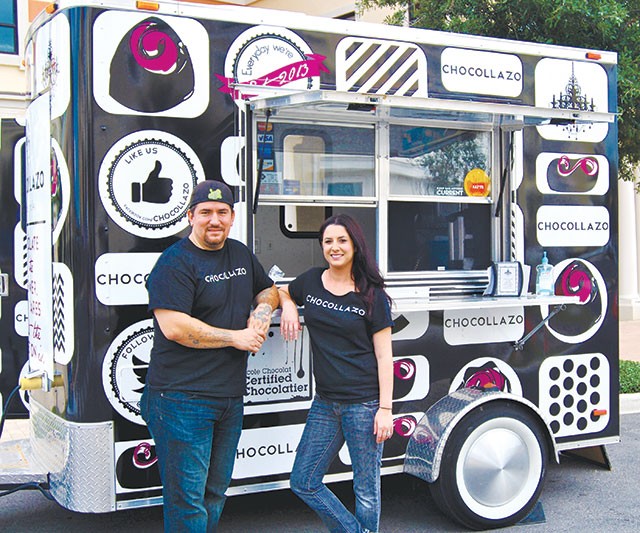 San Antonio is about to get another dose of love from the Cooking Channel’s Eat St. The show, which focuses on fun food trucks across the U.S., stopped by last year to film DUK Truck, Say She Ate, Rickshaw Stop and Tapa Tapa Truck. This time around, the crew will film Wheelie Gourmet outside the truck’s Gold’s Gym-based Counter Culture Café (21044 US 281) on Wednesday, December 11; Crazy Carl’s on Thursday, December 12 at The Point Park & Eats (24188 Boerne Stage); Chocollazo chocolate trolley on Friday, December 13 at The Point; Lagniappe Today on Saturday, December 14 at The Block (14530 Roadrunner Way); and The SpiceSea Gourmet on Sunday, December 15 at The Point. Filming will start at noon for Wheelie, Crazy Carl’s, Lagniappe and SpiceSea Gourmet; 12:30 p.m. for Chocollazo. Food truck fans and famewhores can come out to the tapings for on-camera interviews and such.

In more food truck news, Candie Yoder, owner of Cockasian Food Truck has finally purchased her wheels. Modifications are being made on the new truck, but in the meantime a Kickstarter campaign has been set up to help fund and promote the traditional Korean truck (think Korean fried chicken, spicy tofu, dumplings and stir fried noodles). As of press time, the campaign had raised $400 of the $5,000 goal.

Jeff Balfour, who recently left Citrus at the Hotel Valencia to open his own venture at the Pearl Brewery, will join forces with the Special Projects Social for Soup Night on Saturday, December 21. At an affordable $35 a pop, the evening will include two types of soups, bread from Bakery Lorraine, cocktails by the Brooklynite’s Jeret Pena and a holiday market by SPS veteran artists for you last-minute gift-buyers. All proceeds will benefit the SA Food Bank. Visit thespecialprojectssocial.com for more information.

Staring out our office windows onto the drizzly, chilly streets below, about the last place we’d want to be right now is outdoor haven The Luxury (103 E Jones, (210) 354-2274). Luckily, Andrew Weissman’s latest casual spot now delivers their sammies and salads for free within a 5-mile radius (and $1 each additional mile within Loop 410). That’s a win for team Tied-To-My-Desk.

Don’t let old culinary acquaintances be forgotten at the end of the year. Remember that CIA Bakery Café (312 Pearl Pkwy, (210) 554-6464) closes to the public after Friday, December 20, and BIN 555 (555 W Bitters, (210) 496-0555) will ditch the wine and small plates concept for the oh-so-hot-right-now Asian fusion trend in 2014. BIN-heads can get their last fixes with the BIN Bye Bye Bye menu, full of favorites like seared scallops, Brussels sprouts and a ridiculous creamy crab dip gratin, available through December 31. And pour some out for Boneshakers, an independently-owned bar and, later, pizzeria, that focused on bringing Texas craft beer, artisanal pub grub and live music first to the South Side and later to the foot of the Hayes Street Bridge on the East Side. The Boneshakers crew announced earlier this month that they’d throw in the towel by year’s end, however, we hear they have another beer-based project in the works located off Brooklyn Avenue.