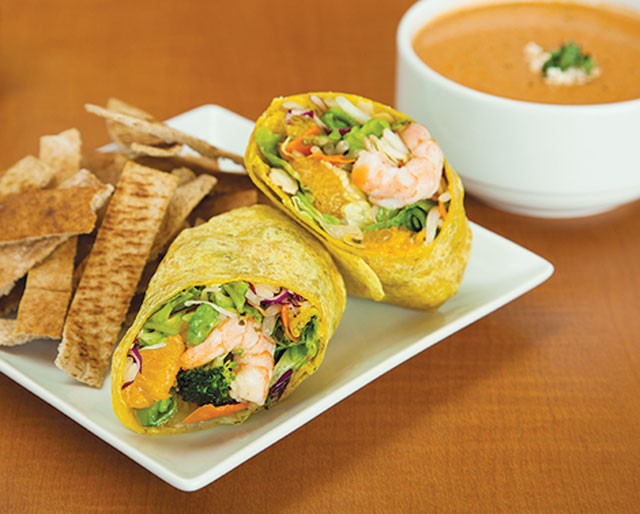 This is kind of a big deal: Spurs fans aren’t tied to crappy arena food anymore. Sure, the AT&T Center has had a Whataburger for a while, but the venue has added several fan-friendly items such as grilled cheese and a Caribbean-themed bar. The best part? The SWBC Terrace Restaurant will showcase the city’s chefs with signature dishes by Andrew Weissman (Sandbar, Il Sogno, The Luxury, Minnie’s), James Moore (TBA), John Woods (Citrus) and Jeff Balfour (The Pearl) during select games throughout the 2013-2014 regular season.

After opening its doors in 2011, Vegeria Vegan Tex-Mex (8407 Broadway, Ste 1) has finally started serving breakfast. The tasty lineup includes breakfast bar smoothies, breakfast tacos and a daily waffle special. If you’ve ever been by for brunch, you know this is awesome news. The bar’s open 8-11 a.m. Monday through Friday.

In cocktail news, fans of boozy and fun concoctions can learn some take-home skills with classes via Gustology. Similar to paint and sip classes around town, Gustology’s events include a how-to on making three different cocktails, as well as a parting gift so you can replicate the process later. Recipes change often, but scheduled drinks for this month include a Dirty Shirley, a pumpkin spice martini, a Side Car and a Poinsettia, along with chingos of margaritas. Visit gustologist.com for details.

There’s a new franchise in town: Houston-based Salata, which specializes in “tossed-to-order salads and salad wraps,” opened in mid-October at 11075 I-10 W, Ste 310 inside Huebner Oaks Shopping Center. Alamo Café owners and operators Tom McCarthy and Pat Hanlon have franchised the chain, which launched in 2005, with plans to open a total of five locations in San Anto and seven in Austin.

The Junior League of San Antonio will host Jan Whittle, former British Navy cook for its “Taste of Autumn” fundraiser at The Bright Shawl on November 14 at 5:30 p.m. Whittle, currently a representative for Ben E. Keith, has a storied resume, which includes cooking for the likes of the Queen of England. So, you can literally enjoy a meal fit for a queen during this five-course dinner and benefit. Call (210) 225-6366 for ticket information.

Finally, are you ready for the holidays? Because Q on the Riverwalk is. The restaurant, located inside the Hyatt Regency (123 Losoya), has released Thanksgiving brunch and dinner menus, along with the menus for the Ford Holiday River Parade and Lighting Ceremony on November 29. Call (210) 510-4477 to reserve your buffet-style dinner and seat.