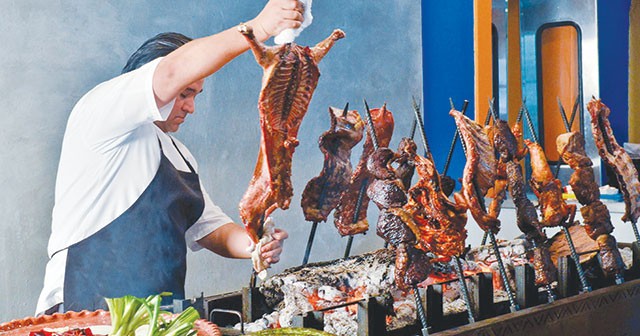 Flavor File is back to fill you in on anything you might have missed during last week’s Best of San Antonio madness.

For starters, Johnny Hernandez’s El Machito (7300 Jones Maltsberger, (210) 314-3971) opened its doors this past Friday. The restaurant, which sits inside the shuttered Firebird Mexican Grill space, will focus on a “celebration of all things meat” with mesquite-grilled meats cooked in the style of carne asada of northern Mexico, according to El Machito’s website. Eaters can expect to find house-made Mexican sausages and Hernandez’s signature dish of locally sourced cabrito.

SoBro Pizza Co. (1915 Broadway, (210) 227-6276) has finally joined the Lower Broadway area as its latest restaurant after Grayson Street Eatery (521 E Grayson, (210) 444-1225). The space is a joint project by Mon and Gerry Shirley of Mon’s Thai and Paul Hughes of the former Park Motel Café. The menu is comprised of antipasti, salads, soups and sandwiches ($8-$10, served 11 a.m. to 5 p.m.), calzones (or sobrohs), and of course, pizza. The ’zas are broken down into reds, whites and greens, referring to their sauces, and so far, the offerings seem promising. The Margherita, which was sampled during the soft opening, had a zippy red sauce and uber-melty cheese and the “FIGJAM” pie featured sweet figs, tangy gorgonzola, prosciutto (always a win) and a mountain of arugula. The pizza prices range from $12 to $19. Sobro is open 11 a.m. to 10 p.m. Sunday-Thursday and 11 a.m. to 11 p.m. Friday-Saturday.

Another addition to the area comes via Jeret Peña’s latest project, Golden Gloves Social House (401 Pearl Pkwy, (210) 444-0707), a dive-meets-cocktail bar co-owned by Chris Erck (Tacoland, Swig Martini) and managed by brother Jorel Peña and longtime employee Javi Gutierrez. Unlike its predecessor, Golden Gloves will focus on adding quality drinks at a value, according to Peña, so expect to find most quaffs priced around $5-$7. The boozeteria also features a pretty expansive patio along with mobile dining partners such as Teka Molino’s food truck and Tailgate Bistro USA. Golden Gloves is open from 2 p.m. to 2 a.m. daily.

Over at your favorite new Asian joint—yes, I’m talking about Hot Joy (1014 S Alamo, (210) 368-9324)—Miss Speed Rack Texas is preparing for nationals. Elisabeth Forsythe will hold her last practice round inside Hot Joy on Sunday and Monday from 11 p.m. to 2 a.m. before heading to NYC on May 8 to compete for the national title. For $20, patrons can order four creations from a list of classic cocktails. She’ll work on speed and accuracy while you get nice and boozy.

Finally, Earth Burger became the first SA-based restaurant to meet a Kickstarter campaign (an impressive $40,000). The vegetarian fast-food joint, brought to you by the folks behind Green Vegetarian Cuisine, will open in June at 722 NW Loop 410.