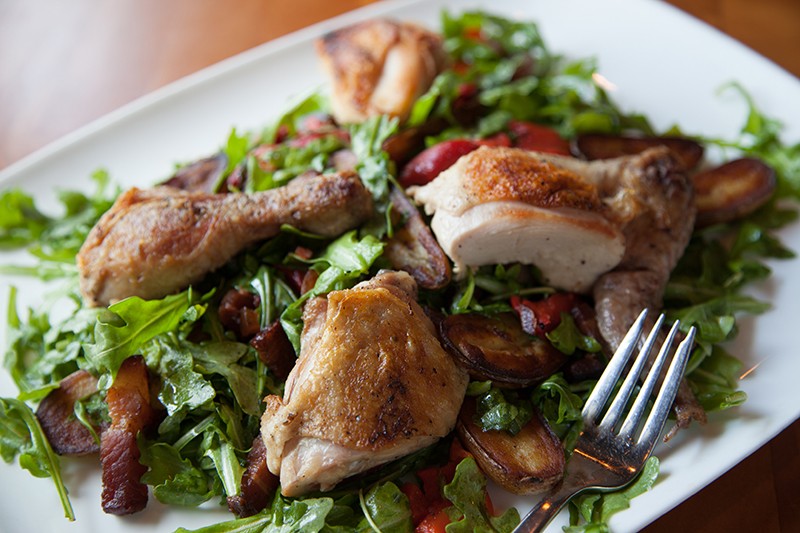 Consider: a lobe of freshly pulled mozzarella of Deflategate proportions, glistening with olive oil sparkling with sprinkled sea salt and bolstered by a raft of grilled bread.

My first cheese experience at Tre Enoteca's bar was less uplifting. The bartender did a good job with a classic Boulevardier (rye, Campari and vermouth) but my lemony baked ricotta seemed underthought and a few chopped olives masqueraded as tapenade. But the pulled-to-order mozzarella with its amusingly springy texture set everything right on the next visit, setting in motion a sequence of dishes that were almost flawless.

At Tre Enoteca, the latest iteration of Jason Dady's former Bin 555 space (Umai Mi was but a brief blip on the radar), the menu at first glance reads like Tre Trattoria lite. The format is similar, the dishes (including some that hark back to Bin) familiar-sounding, if not in every detail. Though it has some almost-unconventional offerings such as our appealing Charles Smith Washington Cabernet, the short wine list doesn't seem to merit "enoteca" status. Time to stop thinking and just start ordering.

Not everyone will be thrilled with the generously applied black cumin cream that was the dominant decorative and taste component in a wood-oven pizza with prosciutto, mint and ricotta — but it definitely got my attention. We split the pie as an appetizer and if the dough itself didn't have a fully developed flavor, it was handsomely puffy, fashionably charred underneath and a perfect platform for the generous toppings.

Next plate out, its "Order up!" appearance announced from the open kitchen by Dady at the near-scream that was required for him to be heard over the din of a table of 14 or so, was fusilli with hand-ground pistachio pesto, cherry tomatoes and parmesan. We asked for a little olive oil to drizzle on top and then dug in. Perfect texture, great flavors ... again, heavenly.

Against the full-throttle flavors of the pasta, the wood-oven, free-range chicken served in a nest of arugula with piquillo peppers, fingerling potatoes and winningly chunky/porky lardons, might have paled in comparison. But taken for what it is meant to be — an eminently shareable platter of beautifully moist pollo parts complemented by accessories with real flavors of their own — there's little to complain about. Much of this was taken home, still tasty the next day.

The reason that much of the bird was bagged is that the chef sent a dish out of the kitchen signaling that, despite the noise and supposed cover provided by intervening diners, the critic had been recognized. This happens. But let's turn this to the advantage of both: it gave Dady the opportunity to show off his new pasta extruder (for this dish it was spitting out large, squid ink rigatoni) and it gave us the chance to taste one of the best dishes that has ever come out of any of his kitchens. Fine, fresh pasta doesn't have the structural integrity of the dried version, so the rigatoni collapsed into flat, ridged slabs, but the lamb ragu, the burrata, the black truffle cream ... it should have all been absurdly, ridiculously excessive and yet the combination was actually gloriously over-the-top. Sometimes more really is more.

Praise, too, to the newly-opened and reconfigured space. The lofty ceilings with their wood-clad trusses give the place an appealingly rustic look. The opening into the kitchen has also been fitted out with a polished proscenium. I still contend that this was not a kitchen designed to be looked into and that its fluorescent lighting is both distracting and unflattering, but if dishes as good as the ones we had keep coming out, then I'm happy to just look the other way. At my old fave Nutella tart, for example.