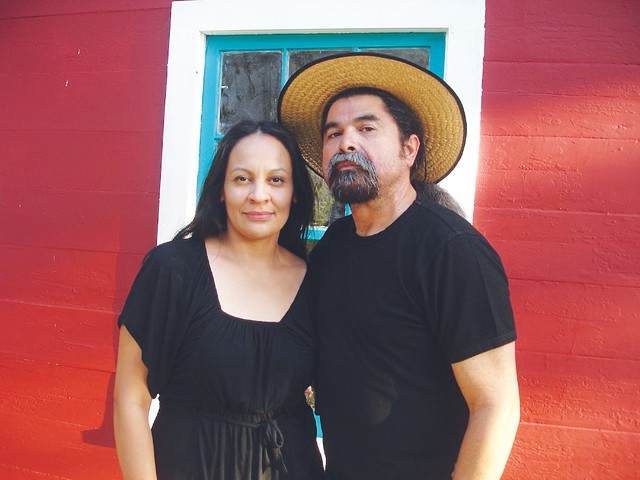 Next Monday is the Feast Day of Saint Anthony and the founding day of our city. St. Tony oversees travelers and the elderly and is the go-to santo when searching for lost things. He also guides the mail; not sure if that extends to email, tweets, or Facebook. He’s SA’s patron saint, but where’s the party? For the second year of what hopefully becomes a city tradition, artist-provocateur Rolando Briseño has organized the Flippin’ San Antonio Fiesta, a community-based event featuring Briseño’s statue, Flippin’ San Antonio, as part of a procession through the Alamo Plaza. We like the idea so much that we’re flipping this week’s Artifacts into a little public-service announcement.

The Fiesta will include a procession of the statue through the plaza, from 6:30 –7:15 p.m., and will be accompanied by local car clubs O.G. Traditions, Rolling Impressions, Latin Playaz, and the Mystic Knights, along with Lewis Sevilla’s car from the movie Selena. The event will conclude with a ceremonial flipping of Briseño’s statue from right-side-up to upside-down as an act of cultural adjustment.

The Fiesta includes music by local artists including singer Bianca Sapet, with an original score by George Cisneros incorporating a riff from Santa Ana’s battle charge: the “no quarter” trumpet blast that warned that no prisoners would be taken. Before the event ends at 8:30 p.m., a piñata in the shape of the Alamo will be offered to the crowd to enjoy in the usual manner. A reception follows at the SMART Community Gallery at 1906 South Flores, with beverages donated by Alamo Brewery, and with food by Cascabel’s Mexican Patio.

Yes, all this is fun. But what is “cultural adjustment,” and what’s up with the flipping thing? When making a request to the saint, it is a custom, Briseño informed us, to turn a votive figure of San Antonio on its head until the request is granted.

As you may have heard, the Alamo is already considered sacred space, dedicated to a certain battle that happened awhile back. But the myth of heroic sacrifice on the behalf of Texan liberty scoots around a few factual details, such as the introduction of slavery and the downright brutal treatment of Latinos and Native peoples during the age of the Republic, and alas, later on. Briseño intends the Fiesta to address the Alamo myth by adding another level of story and celebration, one that isn’t owned by white folk. The Fiesta is not just an adjustment in the storied culture wars, it’s also a restoration of the Alamo’s original intent as one of the church missions in San Antonio. The Saint should approve.