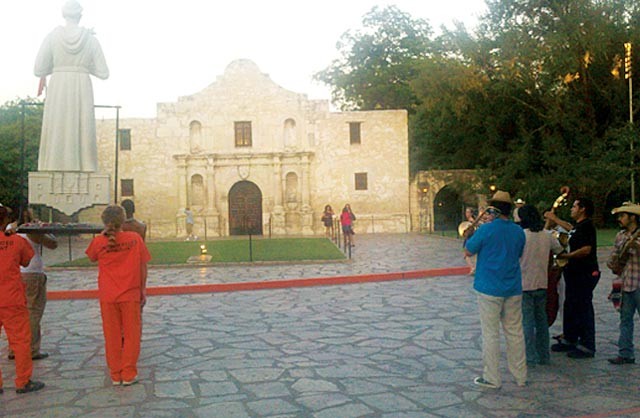 Texas has been plagued with illegal immigrants for ages. Less than a decade after Mexico gained independence from Spain in 1821, additional troops were sent to the northern border to deal with pesky American and European border jumpers that were raiding the district for land and flaunting the Republic’s laws by bringing African slaves to toil in eastern cotton plantations. The Spanish rulers of Mexico had been plagued by these freebooters, too, and had suffered a short-lived rogue regime in the north in 1812-13. Military force was needed to quell the uprising. In 1836, General Santa Ana, the hero of Puebla, rode north to settle the matter of illegal immigration and slavery once and for all. After initial success in Bejar, where the rebels had overrun federal troops garrisoned in an abandoned mission, tragedy struck. Mexican forces were defeated, and the general taken hostage. His release was made on condition of the loss of Mexico’s northern territory, which the belligerents named the Republic of Texas.

No, that’s not the Alamo story you probably grew up with, but it’s not fiction, either. Words are slippery things, they make pictures, and with much telling, become myths.

Though the Alamo is the very image of Texas, its story has the power to cause both pride and pain. “What would you feel if you were a little Mexican-American boy,” asks San Antonio artist Rolando Briseño, “and were told by your blue-eyed friend at school, ‘You killed Davy Crockett?’ It would hurt, wouldn’t it?”

Though he plans to travel soon to promote his book Moctezuma’s Table, which was also staged as an exhibition last year at the San Antonio Museum of Art, Briseño is still on task. A week after staging the second Flippin’ San Antonio Fiesta in front of the Alamo, the artist is looking to next year and sometime in the future when the feast day of our city’s patron saint will become a city holiday. Briseño is using some interesting tactics to accomplish this — including  Flippin’.

On June 13 around 7 p.m., a gray Dodge pickup pulled up to the plaza in front of the Alamo. Loaded in back was a huge statue of St. Anthony, curiously mounted on an armature that transected the white figure at mid-point. Four men lifted the figure from the truck bed, and after setting it on the ground, flipped the statue upside-down. A small replica of the Alamo church seemed to crush the saint as it rose to the top of the inverted figure, which was hoisted on shoulders and then slowly marched through the plaza. A group of men and women holding lilies followed behind as the procession wound its way around the square to the sound of music.

Rounding the streets, a second procession, this time classic low rider cars and trucks from the O.G. Traditions and Latin Playaz car clubs, made the paseo. After several passes through the plaza, the procession, now joined by passersby and filled with children, came to a rest under the trees in front of the Alamo. The statue of St. Anthony was set on a table, and a request was made to the saint, whose image was spun while the band Los Nahuatlatos played. (Briseño says images of St. Anthony are often put on their head and stuck in a corner when making a request to the saint.) Translated from Spanish, the blessing announced, “We give to all the spirits, conquerors of the four winds … the image of St. Anthony, patron saint of this town, which is the center of Aztlan. We are in the center that touches the south, Mexico, center of four directions … we ask St. Anthony with creativity and innocence to take care of all in this town and on both sides of the border…”

Following the blessing offered by Crystal Gonzalez, Bianca Sapet joined her strong voice with the band, offering touching renditions of Saludo a Elegua, La Llorona, Angelitos Negros, and San Antonio Rose. Capping the fiesta, a piñata in the shape of the Alamo church was broken by children, who scrambled to find, not candy, but little brown baby dolls.

I joined up with Briseño at his studio, where he and his assistant Roberta Hurtado discussed the fiesta project.

“Mexican-Americans understand it implicitly,” Briseño told the Current, “but the other people, you have to explain it to them.” The “it’ is the myth of the Alamo, and Briseño’s attempt, through the fiesta, is to make what he calls “cultural adjustment.”

But a little decoding is called for. The four actors who carried the statue, for instance, represent a Latino illegal immigrant of today, an illegal immigrant of the pre-Republic era, a slave, and a pachuco.
"I am trying to create my own myth. I am not saying to the Alamo to do away with their myth. I understand that myths are very important, what their function is. But I am trying to adjust the myths, that’s all, " explained Briseño.
There is “an amnesia that cloaks everything before the battle. Everything in U.S. history is born out of blood, but that’s not the real starting point,” said Hurtado. “There is more than a hundred years of colonial history that happened before in San Antonio.”

“Mission San Antonio de Valero — people don’t even know that’s the real name of the Alamo,” Briseño said. “Just that fact adds another layer. If you go inside the Alamo the displays have a section about Mission life. It didn’t used to. But it lacks in some details, like the slavery issue. It is there, but you have to read a lot. But it needs to be emphasized.”

We looked for ourselves. “Joe,” William Travis’ slave, is mentioned as a survivor of the battle, but we could find little else.

“This is a fun thing, San Antonio is a party town,” Briseño continued, “but the issues I am dealing with are important. Slavery and mestizaje. People ask, ‘Where are all the Indians?’ when they come to Texas. We got mestizo-ized. One of the places it happened was the missions.”

“There is a disconnect between the Mexican-Americans who are here now, the descendents of the Tejanos, and the people who built the Alamo. The mestizo-ised Indians who participated became Catholic and accepted the whole thing. It’s as if Mexican-Americans had landed here from outer space. But there is a history totally connected to the land. There is only one Native American reservation in Texas, but their descendents are everywhere. If we speak another language, its not Nahuatl, an Aztecan language, but Spanish — another Western language. We are a culture and a group that is not accepted, does not have its history. It’s not there. That’s why I have the statue upside-down. Because I am asking a favor from San Antonio, which is inclusion of the history of the Tejanos and Mexican-American people in everything. Our story has not been told. That’s why I am trying to force it.”

“To me mestizo includes everything — African, Asian, that’s what Latinos are. It’s not only Indian and Spanish. It’s the whole world.”

After the fiesta ceremonies, the statue was set upright and marched away from the Alamo. Perhaps the saint is granting Briseño’s request. At the after party, one of the actors who carried the statue, Luis Valderas, was embarrassed by a friend. “Look, Rolando,” the friend said, hugging Valderas. “It’s a miracle. A Daughter of the Republic is hugging a Mexican!!”