Folk Music 101: The Bands At Hand At The International Accordion Festival

Like the instrument itself, the International Accordion Festival is one of the most unique concerts in San Antonio. Where else does each headlining act play twice on the same day?

And where else could such far-flung genres cross-pollinate at a single show? Paying homage to the squeezebox's intrusion into folk cultures around the world, SA's Accordion Festival includes music from Bulgaria, South America, Louisiana, Paris, the Balkans, Louisiana, the Ukraine and our good ol' South Texas.

It's not just the accordion you're getting at La Villita this weekend. Because of its affordable price tag and loud-honk timbre, the instrument traveled from its homeland in Central Europe to become a staple of folk music worldwide.

Since a globe-trotting Saturday trip is only possible for Elon Musk and Air Force One, the squeezebox fest is a cheaper way to understand the instrument's importance outside of Tex-Mex genres. We've highlighted some of the musicians and genres so diverse and nice that they're playing on Saturday twice.

If Flaco Jiménez is conjunto's ambassador to pop culture — on Rolling Stones records and lifetime Grammy presentations — then Santiago Jiménez, Jr. is the vanguard leader of the old-school style. Named after his father, the great bandleader and innovator, Santiago Jr. retains the verse-solo-verse structure of heyday conjunto, even preferring the acoustic tololoche bass to the electric rig common in tejano.

Since his recording début at 17 in 1958, Jiménez, Jr. has employed a sly and witty approach to the instrument. On tunes like "El Toro De Mi Rancho," his drummer plays a straight snare groove, as Jiménez, Jr. swings the beat, creating an arresting layering of rhythm. In his bouncing solos, he can subtly inflect the cumbia rhythm.

In 2000, Jiménez, Jr. was awarded a National Heritage Fellowship from the National Endowment for the Arts. It may not be as flashy as his brother's Lifetime Grammy (or Flaco's gold tooth), but it's a proper honor for this archivist of early conjunto. As anyone who's seen him at his near-weekly Sunday gigs at Carnitas Urapan, the 71-year-old accordionist is a living library of Tex-Mex culture.

A pan-Balkan word for neighborhood, Mahala finds its home in the wards of New Orleans. On the Tupan, a large Bulgarian drum held over the shoulder, percussionist Boyanna Trayanova creates booming kettle tones and light patter on the instrument's edges. On guitar and accordion, Georgi Petrov and Matthew Schreiber riff through impossibly fast progressions in this showcase of Eastern European folk.

Like the quesarito or the entire city of New Orleans, California's Buyepongo is one of those great examples of American cultural exchange. Growing up all over LA County, the big band thrives on the rhythms of cumbia, punta and merengue. But if its sound is influenced by the pan-Latin, Buyepongo's mindset is strictly Staten — the band claims the Wu-Tang Clan's 36 Chambers cut "Bring da Ruckus" as an aesthetic mission statement.

Buyepongo, which translates to "bring a ruckus," achieves its rowdy goal through a standard drum kit and the guacharaca, a scraping Colombian stick instrument that drives the rhythm deep into the night. Though the accordion isn't Buyepongo's primary vehicle for troublemaking, the squeezebox adds another cultural notch to the band's delightful flattening of the Latin world. 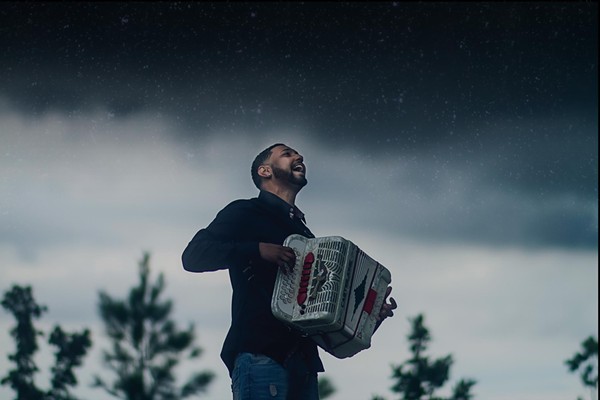 From Lake Charles, Louisiana, accordionist Cedryl Ballou and his Zydeco Trendsetters meld the thrilling bayou genre with stadium soft rock — students of both Professor Longhair and the Dave Matthews Band. As the grandson of zydeco/blues guitarist Classie Ballou, Cedryl adores the swamp-surf rhythm, riding it all over his new release Country Roads.

Ukrainian quartet DakhaBrakha is the unopposed contender for "Saturday set you'll catch twice because it's so damn good." A mashup of the Ukrainian words for give and take, Dakhabrakha describes its music — indebted to West Africa as much as the streets of Kiev — as "ethno-chaos."

Fair enough. When the four singers of DakhaBrakha shout harmonies and odd Ukrainian modes, it's a torrent of belting, beautiful music. With two drums, an accordion and a viola, the quartet's rhythmic exploration is as rewarding as its harmonic boggle (think a Ukrainian folk Dirty Projectors).