Food and Art Combine During CAM

Before she opened ladled even one bowl of Texas red inside the Institute of Chili and still before she turned the beloved truck into Chamoy City Limits, Ana Fernandez was known solely as an artist. The Corpus Christi-born Fernandez was raised in SA, earned a bachelor of fine arts from The Art Institute of Chicago and later an MFA from UCLA. It wasn't until her return to the city that raised her that she tried her hand at feeding the masses she was used to drawing.

In her latest, "New Watercolors," Fernandez returns to her roots as she takes snippets of her life — be it on her drive to work or a park to shell out more raspas — using her camera and cellphone. The exhibit will open Saturday, March 12, from 5 to 11 p.m. at Silkworm Studio and Gallery (1906 S. Flores St.).

Throughout her stints in Chicago, LA, Corpus Christi and now home, Fernandez says she's amassed a sizable collection of tiny one-act plays on her phone, along with source material from local media.

The images can include anything from fresh catfish sold to a local grocer to restaurant store fronts, like Gorditas, a gouache watercolor that features the custom signage found in most mom-and-pop, hole in the wall joints. It's true — caldo and menudo are served daily.

Though 90 percent of the estimated dozen 9-by-12-inch paintings Fernandez will create for the show feature scenes from her usual routine, we might have to wait a little longer for scenes from inside Chamoy City Limit.

"I like having the business because it's completely separate and I love meeting the food people. To me the food is more exciting right now," Fernandez said.

No raspas yet, but it can't be too long as summer and its heat approaches. She'll have to find a way to get out of the sun somehow. 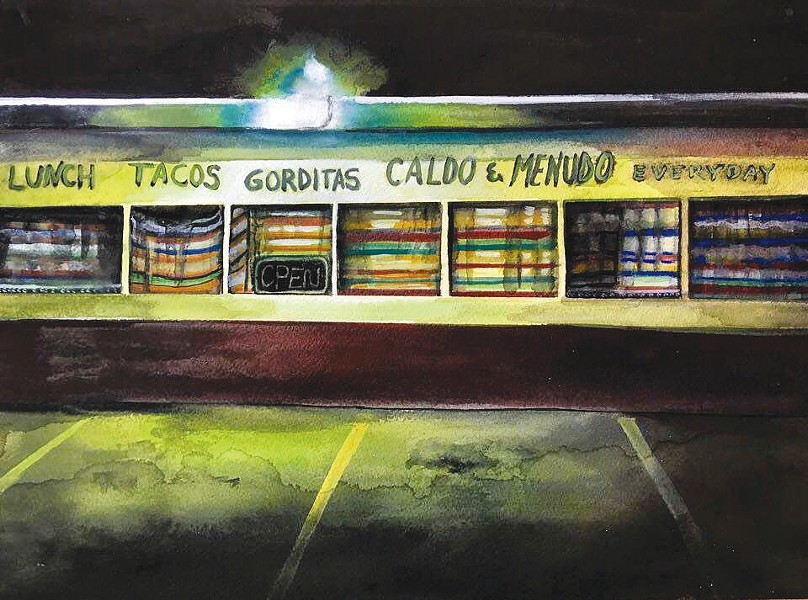 Texas Drafts & Draws • The festivities aren't limited to only food. The Southwest School of Art will celebrate its "Texas Draws IV" exhibition with a beer tasting and mini beer garden. Stop by for this Sunday Funday, which will include samples from Branchline Brewing, Freetail Brewing Company, Ranger Creek Brewing & Distilling and the upcoming OK Brewery and Eishaus. The afternoon includes trivia, drawing and cornhole. Free, Sunday, March 13, 2-5pm, Southwest School of Art, 1201 Navarro St., (210) 224-1848, swschool.org.