For Three Artists at Artpace, the Mechanics of Photography is the Message 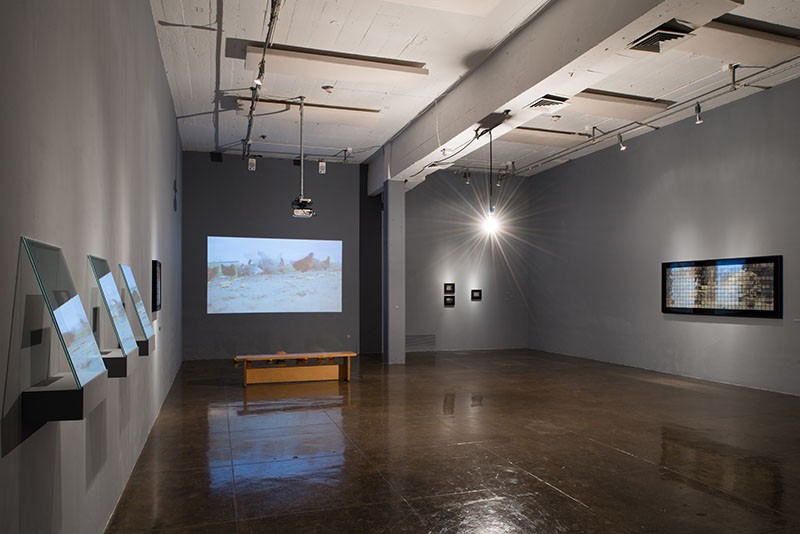 The Fall 2014 Artists-in-Residence exhibition at Artpace is a study in taxonomy, and a fine example of the curatorial ideal that work exists in conversation. Most surprising, the work that seems at first the least pre-possessing possesses tremendous power; not just as a series of beautiful objects, but as an utterance about the gallery experience.

Tokyo-based Takashi Arai combines the up-to-the-moment photo tech of a GoPro camera hurtling toward earth, in contrast with his daguerrotypes' careful slivers of silvery ghosts. Adam Helms, from New York, functions as a curator of his own compulsive internet research, but also the demanding details of photogravure. Austin's Anna Krachey marshals her elegant techniques and preoccupations to work on the viewer in the moment and in doing so flips the script; there's no and-then, and-then, and-then, just right now.

Mika Yoshitake, the curator of the Fall 2014 program, is an assistant curator at the Hirshhorn Museum and Sculpture Garden in Los Angeles. She has coordinated exhibitions of Ai Weiwe and Takashi Murakami and has also written catalogue essays for the Guggenheim, Dia Art Foundation and the Museum of Modern Art. Tyler Green, writing for Artinfo, said of her position at the Hirshhorn, "By all accounts recent hire Mika Yoshitake is a potential star." She shines in this exhibition.

By curating the work of Arai, Krachey and Helms, Yoshitake demonstrates a nuanced approach to cultural history and a profound understanding of how it intersects with the technological history of photographic image-making.

The initial focus point of Arai's work is a single-channel video loop of an air bombing. They're not weapons exactly; these are stand-in pumpkins falling from a plane, crashing to the ground. Which is funny, but effectively refers to the brutality of military onslaught.

Lining the walls are contemporary examples of daguerrotypes, the primitive and miraculous technique of exposing iodized silver to light. Arai's are portraits; of the U.S. combat planes used to bomb Japan, of elderly survivors of the atomic bombing at Nagasaki, etched and silvery, beings existing in our current timeframe, who doled out or suffered the worst of a 20th-century war, etched onto our eyes using the 19th-century technology.

Arai says, "The daguerreotype, irreproducible and etched by the light emanating from a particular place—its surface literally carved in 100-nanometer relief—I call it as a 'micro-monument'... My mission is to break down massive issues into [the] observable world of individuals, with the extraordinary details and durability of daguerreotype."