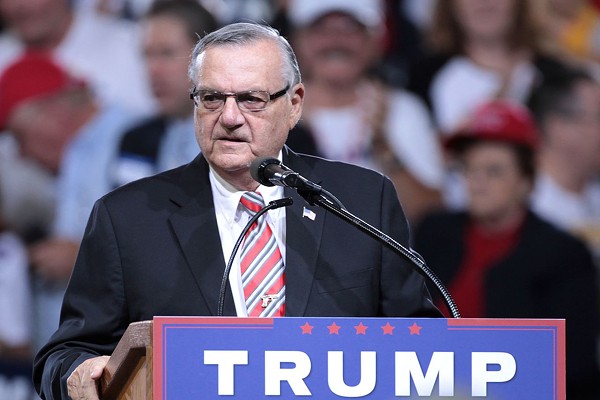 In the midst of a national push to get local law enforcement officials doing the job of federal immigration agents, a former sheriff has been convicted for doing just that.

It's not just any sheriff — it's former Maricopa County Sheriff Joe Arpaio, poster boy of the anti-immigration movement known for detaining hundreds of Latinos based solely on the suspicion that they were in the country illegally, and retaliating against those who complain. His work to eradicate the Latino population of his Phoenix county earned him a 22-page report from the Department of Justice in 2011 outlining the explicit racial profiling and "unconstitutional policing" found in his office.

Arpaio, who was voted out of his 24-year reign as Maricopa sheriff in 2016, was found guilty Monday for criminal contempt of court by ignoring a 2011 court order to stop detaining people he simply "suspected" were undocumented, but had committed no crime. The misdemeanor is punishable by up to six months in jail.

His federal conviction clashes with instructions coming from the new administration in the White House. Five days into his presidency, Donald Trump signed an executive order that would withhold federal funds from so-called "sanctuary cities" — cities that refused to detain undocumented immigrants in city or council jails for the feds to pick up. The order was blocked by a U.S judge in April, but the message remained. Trump wanted more law enforcement to act like Arpaio, who campaigned for Trump during the 2016 presidential race.

While sheriff, Arpaio was steadfast in his refusal to follow the 2011 court ruling that blocked him from arresting Latinos who looked like they could be undocumented. He still claims everything he did was legal, and the multiple courts ruling against him were just playing politics. His lawyers plan to appeal the Monday conviction.

In her ruling, U.S. District Judge Susan Bolton wrote that Arpaio had shown a “flagrant disregard” to the court.

“Not only did Defendant abdicate responsibility, he announced to the world and to his subordinates that he was going to continue business as usual no matter who said otherwise," she wrote.

The conviction, which upholds the 2011 ruling that Arpaio's arrests were unconstitutional, could be seen as a warning to White House and state governments interested in the sanctuary city crackdown.

Texas Governor Greg Abbott, who dropped Trump-like threats to withhold funding on any sanctuary city or county, signed a bill in May that will penalize local law enforcement officers for enforcing sanctuary city rules. Senate Bill 4 is expected to go into effect on Sept. 1, unless a federal judge grants an injunction in a case against the law. Immigration law experts say Bolton's ruling should be "required reading" for every Texas police officer.

'The ruling essentially recognizes that local police lack the constitutionally-required evidence to detain or arrest undocumented immigrants who entered the country without inspection or who overstayed a visa," said Thomas Saenz, president and general counsel of the Mexican American Legal Defense and Educational Fund, in a Monday statement. MALDEF is representing a number of plaintiffs in the federal case against SB4.

"It is no exaggeration to say that SB 4 heightens the risk of being found guilty of significant legal violations for every police officer or sheriff’s deputy throughout Texas."