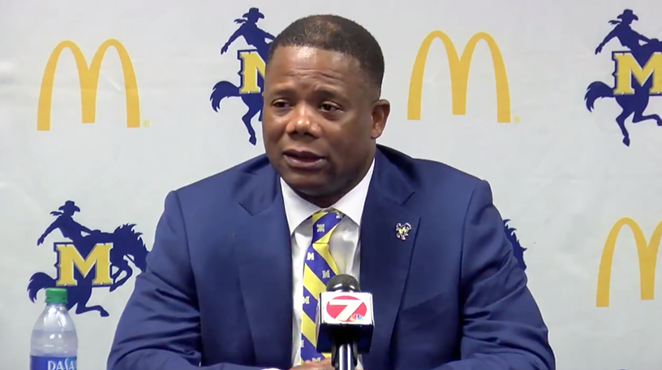 Frank Wilson, the former football coach at the University of Texas at San Antonio, may still be harboring some negative feelings toward the Alamo City school.

During a Friday press conference for his new gig at McNeese State University in Louisiana, Wilson threw some not-so-subtle shade at UTSA.

"This job, unlike the one I just left from, has something very unique, rich tradition," Wilson said of UTSA. "Extreme amount of pride and things that you don't necessarily have to invent. It's here. It's been done here before and it's been done at a very high level consistently."

Wilson's snub comes after he was fired from the head coach position at UTSA in December. He was in the position for four seasons.

Yes, Frank Wilson dissed UTSA, but on the bright side he lost his Twitter verification

While some UTSA fans were turned off by Wilson's comments, Jarveon Williams, a running back who played under the former coach, tweeted that he had spoken to Wilson. Williams also said that it was "all love" between Wilson and UTSA fans.

Just got off the phone with @FrankWilson28 It’s all love from those in the blue and orange. Same from him. Now let’s Focus on the next chapter of UTSA! #BirdsUp #DrawTheLine

You can hear Wilson's comments below.

McNeese coach Frank Wilson with a not-so-subtle jab at UTSA.

"This job, unlike the one I just left from, has something very unique— rich tradition, extreme amount of pride and things that you don't necessarily have to invent. It's here. It's been done here before."#McNeese pic.twitter.com/5q0xRqniiC