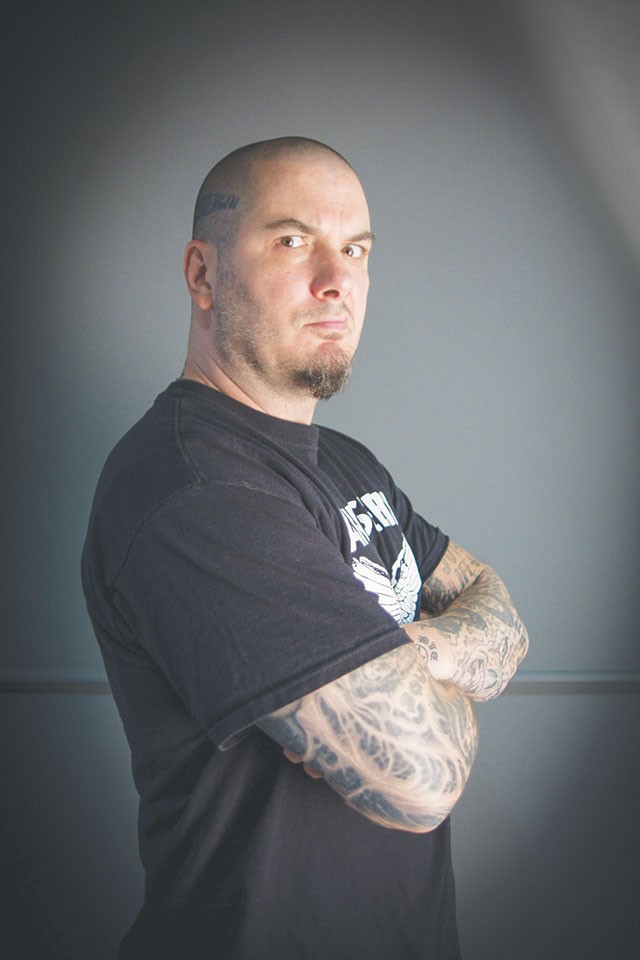 Phil Anselmo has survived it all—Pantera’s success and tragedy, the bitter ending of Superjoint Ritual, drug abuse and back and knee surgery. Now, he’s a practical man.

“I just felt inspired,” he told the Current from his home in New Orleans, explaining why he decided to embark on his first-ever solo tour behind 2013’s Walk Through Exits Only, the album he released as Phillip H. Anselmo & The Illegals. “If I feel inspired, I’m going to act on it. So I felt inspired, I did a record, and now we play shows. Nothing too scientific there.”

Neither pure death or black metal, Walk Through Exits Only is Anselmo’s straightforward attempt to disassociate himself from the average metal band out there.

“I sing about real things that happen to me and I carry no fucking invisible ideology around on my shoulders at all,” he said. “I see a million bands copying black metal over and over, and even some death bands do the same thing to some degree, so I wanted to do something different. I didn’t want to record speed for the sake of speed or double-kick for the sake of fucking double-kick.”

One of the things he sings about is the media, as exemplified by opening track “Music Media is My Whore.” Or is it?

“Look, in this album I was going very absurd with a lot of my lyrical content and titles,” he said. “The absurd thing about it is that, if you look at the lyrics, it’s nothing about the media. It was just something to grab attention. I have a great relationship with a lot of the press, but some are only interested in grabbing a juicy headline and write about fictional things or things that are controversial. So that’s my little kick back to the press, so to speak. It’s all a joke, really…” When I move on to the next question, I can hear him say, “…but not really.”

On Monday at Backstage Live, Anselmo and his Illegals (Superjoint Ritual’s Marzi Montazeri on guitar, 16 Horsepower’s Steve Taylor on bass and Warbeast’s Joey “Blue” González on drums) we’ll see Anselmo in apparently his best shape in years. During the interview, his mind is sharp and his body, he says, is ready to roll.

“I’ve been through a lot,” said Anselmo, who underwent back surgery in 2005 and knee surgery in 2009, and who, in 1996, was clinically dead for “four to five minutes,” after overdosing on heroin following a Dallas concert. “But physically, besides the obvious pains and aches of getting older, I’m fine and good to go,” said the 45-year-old.

Drugs are not a problem this time around either.

“It’s been 11 years [and] I haven’t used any hard drugs at all,” he said. “Honestly, the hardest thing I use these days is probably beer. Fucking beer is enough, man. I probably can’t finish a six-pack without having a fucking hangover.”

Despite his past physical and addiction problems, nothing was harder to overcome than the death of former Pantera guitarist “Dimebag” Darrell Abbott, who was killed onstage by an imbecile named Nathan Gale during a Columbus, Ohio, Damageplan concert (Abbott’s band). Gale was killed by police at the scene.

Abbott and Anselmo had a public feud ever since Anselmo was blamed for the breakup of Pantera (Anselmo claims the band never contacted him to return); Metal Hammer magazine quoted Anselmo stating “Dimebag deserves to be beaten severely” in 2004 (the same year of Abbott’s death), and that was just too much for some fans and Abbott’s family. Even though Anselmo claimed his comments were tongue-in-cheek and that he was furious the “goddamn magazine” put his quotes on the cover, Abbott’s family requested that Anselmo not attend the funeral. Some even speculated that Abbott’s death was related to his fights with Anselmo, but the connection was emphatically denied by police.

“There is no evidence leading detectives to believe Nathan Gale was communicating with Phil Anselmo or any other individual ... in an effort to hurt Dimebag Darrell Abbott,” said a police detective report cited by the Columbus Dispatch in 2004.

After Abbott’s funeral, Anselmo posted a teary video on YouTube in which he repeatedly says “I’m sorry” to Abbott’s family, band members, fans and friends.

“Bless his family and all of his close friends,” a visibly moved Anselmo said in the video. “I never got to say goodbye in the right way, and it kills me.”

“For me, really, I think it would mean a lot for [bassist] Rex [Brown] and [drummer] Vince [Abbott, Dimebag’s brother] and myself to sit down and, I guess, bury the hatchet where we can be on more friendly terms,” he told Fuse TV. “And, you know, I think it would mean a lot to the fans. Without Vince, there’s not any Pantera reunion at all; it’s useless. But he damn well knows my door’s wide open. He needs to bust out the keys and unlock his, man. I’m waiting, but I’m not holding my breath.”

When asked by the Current, all Anselmo said is that he lamented the fact that Pantera “will never happen again.”

“The Illegals make a much more complicated, splintered-groove, quick-change kind of metal than his other bands of the last decade,” wrote Ben Ratliff. “Lots of breaks, sequential or alternating riffs and strains and rhythms powered by double bass drums.”

The man behind the drums, Fort Worth’s “Blue” González, met Anselmo when he was 18.

“He just turned 22, 23 recently,” Anselmo said (González will be 24 in July). “He’s a baby, and I had to teach him, or re-teach him, the structure of extreme music the way I saw it, because there [are] a lot of time signatures changes within the music that are not concurrent with everyday black metal.”

The second leg of the tour started in Houston on January 10 and, depending on his mood, SA fans may have a chance to listen to a handful of Pantera and Down classics.

“I think every night should be different,” Anselmo said. “We’re definitely going to play most of our stuff but, as far as blasts from the past, I’m going to leave it up to how I feel that night. Anything is possible, really.”

Playing in SA means he’ll be returning to a place he knows well.

“I tour all over the world and in SA there’s always, always, always a gigantic Hispanic, Mexican presence, and they’re always some of the greatest heavy metal fans ever, anywhere,” he said. “Don’t ever think I don’t remember SA. I love SA and it’s going to be great to come back.”