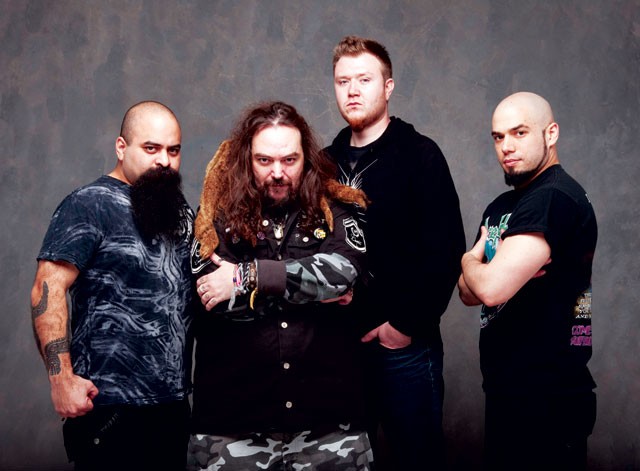 With 20 million copies sold worldwide (more than three million in the U.S.), the Sepultura legend has been steadily growing since Max Cavalera left the influential and versatile Brazilian metal band in 1996. Yet, Cavalera has remained active and comes to San Antonio on the heels of Enslaved, the new album by Soulfly, one of three projects he’s involved in — besides Cavalera Conspiracy, he has a new unnamed project with Greg Puciato (singer for The Dillinger Escape Plan) and Brent Hinds and Troy Sanders (Mastodon).

“It’s going to be like Nailbomb,” Cavalera told the Current, referring to his short-lived 1994 band. “The project’s going to have a new name and all of us are going to sing, which is really unusual.”

In 2013, the 30th anniversary of the birth of Sepultura, Cavalera will publish his autobiography (co-written by Joe McIver and with an introduction by the Foo Fighter’s Dave Grohl, a huge fan), and Cavalera admitted he would love to see the band reunited, but “only if those guys get their shit together.”

Days before his SA show (being opened by Lody Kong, including sons Zyon and Igor, and Incite, fronted by Richie, another son), Cavalera spoke to the Current about a living in Arizona, looking beyond metal, and why metalheads are the coolest dudes. You can read the full Q & A at sacurrent.com.

ON ARIZONA
“I don’t agree with the immigration law here. It’s really kind of racist for the state to do that. To just stop anybody in the streets and have to check them, you know, racial profiling, I don’t agree with that, but I’m here not very often. I’m always on tour. I come here for a little bit and then I go on tour again, so I pretty much live on tour.”

“METAL-ONLY” MINDSETS
“I don’t think you can develop like that. You become cornered. Some of my best ideas come from other sources. Sepultura’s “Refuse/Resist” was a quote I saw in a guy’s jacket in a subway in New York, and he was a Black Panther. So he was a guy who had nothing to do with metal and he inspired one of the main Sepultura songs ever.”

SA AND TEXAS
“I remember a lot of great fans [in SA], especially our Spanish-speaking fans, Mexicans, and a lot of the Latin crowd that comes to see the shows. They’re really great, loud and awesome. I love all of the Texas shows that we do. They’re always packed. I always refer to Texas as the ‘Germany of America’ because they love metal. I’m excited.”

ON WHY METAL MUSICIANS ARE THE NICEST INTERVIEWEES, HANDS DOWN
“We channel our anger into our music, so we don’t have to go bomb some place and we don’t have to go kill somebody. The idea that we’re a bunch of just druggies, troublemakers and we’re a bunch of criminals, that’s completely fucked up and wrong. If there were more metal people around the world, there would be less wars and less problems, because we’re not into that shit.”