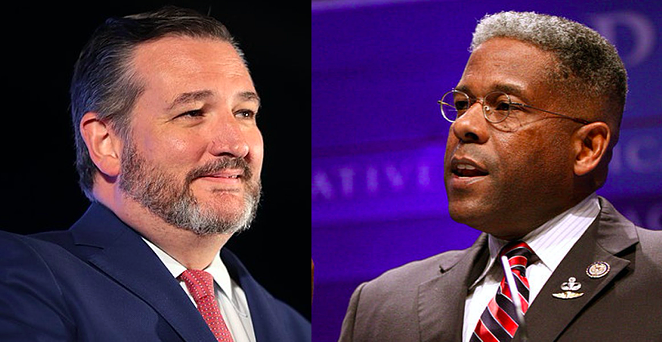 Two of them were from Texas. And, not surprisingly, one was her former boss.

Amanda Carpenter, who worked for Cruz before becoming a CNN commentator, included both the Republican Senator and Texas Republican Party Chairman Allen West on her yearend list of the "worst takes from politicians and other political figures aside from Trump himself."

Cruz earned his No. 7 slot for a cringingly partisan claim that if Joe Biden won the election, Democrats would simply declare the pandemic over because, you know, the whole health crisis was only ginned up to make Trump look bad.

"[I] guarantee you, the week after the election, suddenly all those Democratic governors, all those Democratic mayors, will say, 'Everything’s magically better. Go back to work, go back to school,'” Cruz said in July with cameras rolling. "Suddenly, the problems are solved; you won’t even have to wait for Biden to be sworn in."


Six weeks after said election, the statement has proven to be both utter bullshit and — as bodies continue to pile up amid a terrifying COVID-19 surge — cynical beyond measure.

West landed at No. 3 on Carpenter's list for issuing a divisive and dangerous statement on party letterhead hinting that states unhappy that the U.S. Supreme Court's didn't hear Texas Attorney General Ken Paxton's lawsuit to overturn the presidential election might want to consider secession.

“Perhaps law-abiding states should bond together and form a Union of states that will abide by the constitution [sic]," wrote West, a former Florida congressman.

West subsequently backpedaled, but only after the statement drew the scathing rebukes it deserved.

Carpenter reserved the top spot on her list for Vice President Mike Pence, who's expended an awful lot of hot air this year trying to convince voters his boss has the pandemic fully under control.

The prime example, of course, was the lickspittle veep's June 16 Wall Street Journal op-ed “There Isn’t a Coronavirus Second Wave,” in which he accused the media of fanning a "panic" about rising COVID-19 numbers. Since then, the U.S. death toll has reached 317,000.

"So, who is celebrating this wonderful Trump-Pence achievement?" Carpenter writes. "No one outside of the White House superspreader Christmas parties? Ah. Sounds about right."