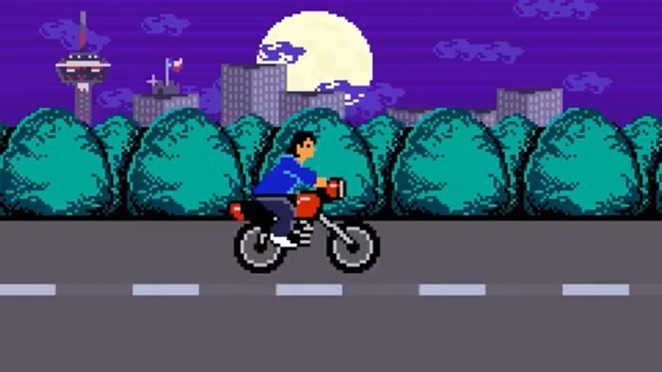 It’s always rad to see Alamo City bands repping their city by releasing new music. From witnessing folks like rapper Milli Mars rapping outside recognizable convenient stores in SA, to the dizzying footage caught by drones in music videos from Lonely Horse, it warms our hearts to see locally based artists keeping it puro AF.

Adding to this Alamo City pride-reel is none other than alt-R&B trio Idyll Green and their video “Jukebox Gentlemen.” Formerly named Hacienda, Rene, Jaime and Abe Villanueva pull viewers into an 8-bit world that looks and feels exactly like playing Shinobi or Castlevania on an old-school Nintendo.

The video starts with Rene Villanueva in 8-bit form hanging in a dive bar. After being harassed to order a drink from the bartender, he's approached by a girl who asks him if he wants to dance. After a quick montage of dancing and making out, a couple of dudes try to fight Villanueva on the dance floor, which sends the girl running.

The rest of the video is a little random, with Villanueva singing in a karaoke room by himself and then getting jumped again by one of the dudes that attacked him on the dance floor.

The assault sends Villanueva into an in-between-life-and-death space (a clear nod to The Legend of Zelda), where two wizards hand him a cassette tape and say, "It's dangerous to go alone! Take this!"

"He basically gets the idea for music in this space," Rene Villanueva told the Current over the phone.

"He gets the tape, which represents the EP," he said, explaining that he (his actual self and character in the video game) essentially takes his actual life experience, mythologizes it, then turns it into a song.

The video is actually just a clever metaphor for Villanueva's songwriting process: making music out of his own life experiences.

But what really makes the video shine is the shot of the singer, still in 8-bit-form, riding a motorcycle on what is clearly U.S. Highway 281 near the Olmos Basin – trees running alongside the highway and a distinct shimmering San Antonio skyline blinking in the background, Tower of the Americas and all.

When Love Ends, Be the Water, the first EP under the name Idyll Green, comes out Friday, February 22, on all streaming platforms. The band will celebrate with an interactive release party on Saturday, February 23 at Gray Moon Vintage, 2202 Broadway St. A cassette version of the EP and a book of poetry will be available for sale, and a geodesic dome installation made to look like Rene Villanueva’s bedroom will give viewers more of an inside look to the themes behind the EP.

Watch the video for "Jukebox Gentlemen" below:
Keep up with Idyll Green at Idyllgreen.com and check out the event page here more information on the release show.