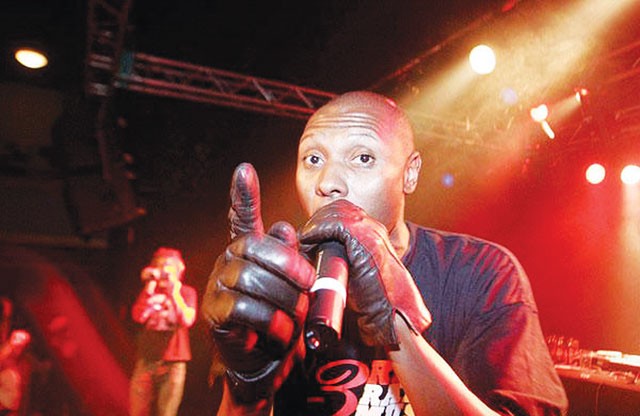 Learning about K-Rino (born Eric Kaiser) involves re-evaluating what it means to be hardcore. All Music Guide attributes 24 releases to him in 16 years. However, the discography lacks the latter of his two 2011 releases: Day of the Storm. It would make sense to say he raps with the gravelly timbre of Xzibit and the methodical fury of Tupac, but he started performing in the early ’80s, before anyone had heard of either. While he’s written no shortage of braggadocious tracks, his other 2011 release, Alien Baby, is full of urban musings on seizing one’s destiny (“Perfect World”), understanding the historicity of holy texts (“Lifting the Veil”), and emphasizing diplomacy when one realizes they’ve been seeing someone else’s girl (“Who Is This”). “Why would you be mad at him?” K-Rino hypothesized to the Current. “He doesn’t know you and you don’t know him.”

In 1986, K-Rino founded South Park Coalition to support talent in Houston’s famous South Central neighborhood, which has hosted over 60 artists, including deceased icon DJ Screw. Later, after a friend showed him a K-Rino thread on a message board in the mid-’90s, he embraced the internet as a networking tool well before the social media revolution.

K-Rino prefers to walk almost everywhere, conceptualizing lyrics while sorting his head and sometimes startling passersby because he doesn’t realize he’s thinking out loud. All told, his work ethic and raw talent have made music his main gig and earned him shows in Australia and Europe along with unparalleled street cred. “You won’t hear his dangerous mind showcased on commercial radio,” wrote the Houston Press in 2008. “He’s a dominator, not the lowest common denominator.”

Yet, K-Rino is still firmly under rap’s radar. Ben Westhoff, author of Dirty South, said via e-mail that the rapper is both “a founding father of H-Town hip-hop” and still someone he couldn’t include in his book because of limited space and budget. Instead, he stuck with more influential players like Lil’ Wayne and Pharrell Williams.

That said, K-Rino isn’t interested in trading visibility for authenticity. “This industry is so dirty and the people that control it are so wicked,” he said with the icy certainty of a prophet. “I would love for the world to hear me, but the way the industry is designed ... I’m not sure an audience would hear me under the right terms.”

At 41, K-Rino remains committed to the game. He spoke of being inspired by seeing a late-40’s Chuck D doing push-ups in front of a sell-out crowd just a few years ago. He plans to be playing shows long after 50, even if he’s in a wheelchair. “Man, no question,” he said. “Y’all put a urine bag next to me so I can take care of my business and not miss a beat.” •