by Jessica Elizarraras and Ron Bechtol 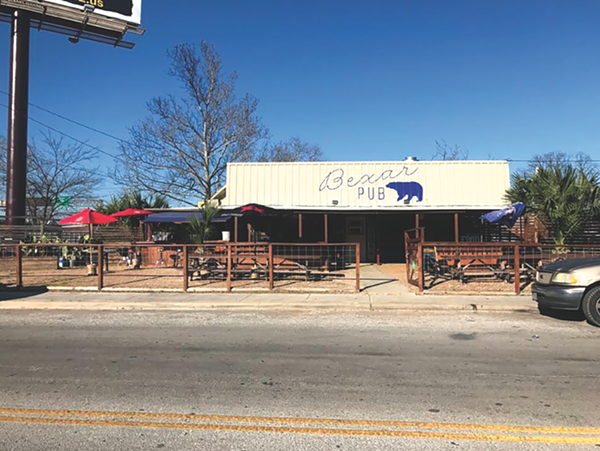 Anybody who hasn’t driven though the Eastside lately is in for a surprise. Stately mansions in Dignowity Hill are being resurrected, smaller cottages are being spiffed up in Denver Heights, there’s new, infill construction throughout, and many streets that once seemed neglected — at least to the non-resident, are showing signs of pride.

Some restaurants, of course, were there and thriving before the tide began to turn. Dignowity Meats, Amaya’s Cocina, Pancho’s and Gringo’s, Tucker’s Kozy Korner, Mark’s Outing … These and more were reason enough to explore. But a quick look at Cherry Street behind the Alamodome, where a brace of houses from 1910 has been remodeled into a still-to-be fully occupied complex called The Alley at the Dome, suggests that, if not exactly yet a tsunami, a new wave is about to hit.

The Alley is expected to be anchored by Sweet Yams Organic (in a lateral move from their current location), FaSlizzle Organic Pizza, Cherry Street Curry House, and a philanthropic enterprise called Cherrity Bar that will be run by local booze guru Jeret Peña with profits donated to charities on a rotating basis. The variety alone should attract business. But, to continue with the wave thing, several epicurean entrepreneurs have recently established beachheads on their own. Here are four.

At I-37 and Brooklyn, Luis Colon, formerly of Folc, has taken over the Toro Taco Bar location vacated by Josh Cross, rebranding it Bexar Pub in the process.  It took a while for the kitchen to get up and running, and early service was problematic at best. It still pays to know some specific beers you like in order to navigate the unlisted selection, though a server actually offered a couple of tastes on my last visit. For its part, food service can also be slow, even with few people there, so beware of weekends when there can be a crowd — strollers, dogs and all.

But by and large, the food is worth the wait — with the exception of the truly sucky whitefish ceviche. It seemed fresh enough but totally lacked flavor. Even the flies, of which there is no lack, didn’t like it. Maybe try the tuna poké instead.  Or the fish tacos.

One of Colon’s biggest hits at Folc was the eponymous burger, so it seemed reasonable to investigate a variation on that theme. Hence, the lamb burger. Its ricotta crumble and thyme and coriander mayo got lost in the mix, but there was a truly great red onion jam, thick-cut cucumber, a runny egg … and a patty that had a good crust and, more importantly, robust flavor. My only complaint was that the bottom bun turned to mush almost immediately. The accompanying thick-cut and peppery fries weren’t sensational, but they got the job done.

The same fries come with the “hot” (and regular) fried chicken. There may have been a tad too much grease floating about in the two-piece option, but that’s what the biscuit was for: It can be pulled apart in layers and used as a sponge for all the jerk-flavored oil that the crusty chicken didn’t absorb. Crusty, yummy and generously portioned chicken, I should add.  The breast/thigh duo was also happy being paired with a lusty, tequila-based Vampiro from a cocktail menu that won’t win any awards but, like the fries, gets the job done on a hot patio in July.  — RB

Deeper into the ‘hood, a former ice house has been converted into The Devil is a Lie, a barbecue and catering operation with its small smoker right upfront. Unlike Bexar Pub, where you can escape into a little AC, it’s outdoors or die at Lie. But the owner is friendly, you’ll likely be offered an icy peach tea, and service is decently quick — especially when the choices have been reduced to a precious few.

If luck favors you, there may be brisket: not especially barky, but good and smoky and leaning toward lean. The sausage is the kind I happen to like: coarse and snappy. And the sides, especially the creative baked beans, have been better than average — when available. (There are tacos requiring slaw, but slaw was absent on two tries, ergo no taco.) Be flexible. I rarely order pulled pork, usually finding it bland, but it was one of the two available options one lazy afternoon, and it emerged sturdy and unusually robust in flavor. The rib snack, a wrapped packet of three small pieces, was likewise serendipitous. The Devil apparently doesn’t have much truck with fancy rubs or lacquered glazes, as this snack was unprofaned by any such temptations. Simple salt and pepper maybe, but otherwise just the smoke, Jack.

Also uniquely, the ribs came with a container of Asian-inspired sauce, the pork with a honey mustard — a bit of devilish deviation from the norm, perhaps. Note that Devil is closed on weekends for catering. — RB

Though I lived off Pine Street for just under a year, I often wondered what was inside the Chas Market & Kitchen, and sadly never ventured in. The market, at the corner of I-35 and Pine, needs a paint job and the parking lot can be a bit of a nightmare (an 18-wheeler was idling out front during our visit). But the interiors hold a very different story.

Owned by J.T. Kim and Hwa Youn Kim since the mid-1980s, Chas Market & Kitchen feels like an NYC bodega meets Rhea’s Deli Market in San Francisco’s Mission District. But instead of Rhea’s massive Korean barbecue hoagies made behind a deli counter, Chas Market brings the ‘cue to your table. The addition is fairly new but the breakfast tacos and lunch plates have been part of the store for much longer. The rest of the shop is a colorful mishmash of produce, beer, sodas, all the cheesy daytime TV you can handle and giant posters explaining the menu.

Pro-tip: Call ahead for a reservation. The restaurant might seem dead, but there was a steady stream of to-go orders and sit-down lunchers while we ate.

The dining area is split in two sections of square four-tops and picnic-style benches outfitted with indoor smokeless grills. Because we weren’t savvy to the call-ahead suggestion, we strolled in and the cashier let our cooks know we were there for the Korean barbecue. It was go-gi time.

After relocating to a taller table at our cook’s request, she lined white banchan-filled saucers and sturdy serving plates in front of us: from pickled daikon, to kimchi, to all manners of cucumbers and seaweed topped with gochujang (red chili paste) to thinly sliced fried fish cakes with cured fish similar to that found in ramen. (Bottled waters were presented as well.) We happily picked at these while our cook bounced back and forth between dropping off a container of rice and the kitchen.

THEN CAME THE MEATS. It’s hard to maintain any level of chill at this. Our cook cut through crisp pork belly, which gave way to tender and flavorful bulgogi, and by the time she arrived with spicy pork and beef short ribs in tow, we were in a meat-induced euphoria. Paired with the sticky short grain rice that held a perfect clumpy chew, it was hard to find faults in this lunch.

There are a few lulls, so don’t partake if you’re in any sort of rush. Don’t give away your leftovers to coworkers like I did, because you’ll be thinking about this meal for days on end. Make this Korean feast part of your San Anto bucket list. — JE

No luck required in the final selection — except in the name. I admit to being surprised to find Thai Lucky on South Pine next to a convenience store and across the street from a vacant lot that seems to serve as a de-facto hang-out space. The resto hasn’t lavished its attention on décor, and the kitchen vent fan provides all of the background sound — to the extent that when it cuts off, a curious hush descends on the space. But if the open kitchen provides ambient noise, it also generates good smells. Curries, for example.  There are three to choose from.

I wasn’t especially impressed by the thin Panang curry, but it may also serve as a kind of metaphor for the inevitable heat-level negotiations: mild, medium, hot … I’d ask for medium plus next time. That same level seems to work especially well with the green papaya salad with noodles, tomatoes, Thai chilies and more — all doused in a funky fish sauce with dried bits that may (or may not) be crab. The papaya’s crunchy, the sauce grows on you, and the accompanying chicharrones are genius.

Not everyone needs to be a total masochist regarding spice level, of course; some dishes at Thai Lucky are perfectly good on the mild side. A case in point is the tom kha soup with coconut milk. The evocative flavors of lime leaf, cilantro, basil and scallion support the mushroom and chicken beautifully, and as many soups such as this are often better at the bottom of the bowl, this one leaves you with an herbal coconut farewell.

Heat is also not much of a factor in the various rolls, but they can be passed over, along with the Shrimp Mermaid wrapped in chicken. But the bland-sounding Nam’ is worth a try if only for the textural allure of crispy rice topped with chicken (or tofu), peanuts and the inevitable lime and cilantro. It works, and there’s just enough going on in this dish to suggest returning for the Thai beef jerky or the snapper with stir-fry veg. I might leave the sushi for a more specialized place, however. Thai Lucky also delivers. — RB