Four Ways San Antonians Can Save the Internet 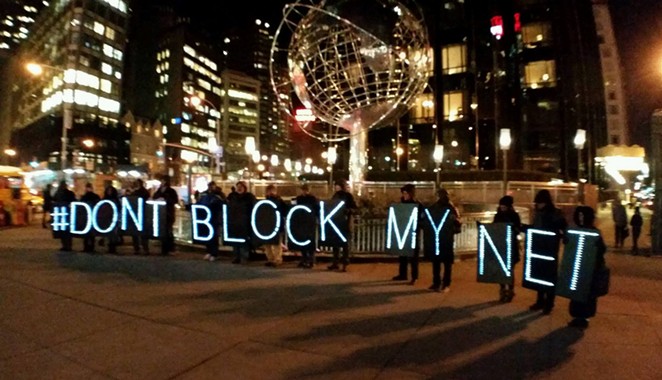 With a 3-2 vote, the Federal Communications Commission (FCC), under the leadership of Chairman Ajit Pai, voted to dismantle a set of rules known as net neutrality. These rules guaranteed equal access to the Internet and prevented your Internet Service Provider from blocking or slowing down the websites you can access. Without net neutrality, companies like AT&T and Comcast will be free to create tiered services (think cable TV packages) with more websites costing more money. The services offered and the cost of those services would be different depending on where you live.

Without net neutrality protecting our access to the Internet, only the richest will be able to fully experience the benefits of being online. It would place those who could afford it on a fast lane and relegate the rest of us to a dirt road. Back in the 1800s in San Antonio, this was the experience of municipal residents when it came to water. Some residents, mostly poor and women of color, would lineup to fill their buckets with contaminated water delivered by aguadores or barrileros from our irrigation canals, while the mostly white and wealthy residents lived in homes with pumps and modern plumbing delivering clean water.

I think we can all agree that whether we are talking about water or the Internet, equal access is essential to our everyday life. Here in San Antonio, and across the country, millions of people have made it clear that they want their Internet protected by net neutrality. In the last month over 700,000 phone calls went in to Congress urging lawmakers to protect net neutrality. Over 300 people rallied outside the FCC headquarters in D.C. during the vote.

Despite the FCC's vote to repeal net neutrality, there is still a lot that we can do to protect our access to the Internet. Here are 4 things we can do together to save the Internet:

What can you do?
Call your member of Congress. Under a procedure known as the Congressional Review Act (CRA), Congress has the authority to undo any action taken by a independent federal agency like the FCC. By passing a CRA, Congress would reverse the FCC's repeal of net neutrality. Over 20 Senators have already signed on to move forward on a CRA, and your calls can pressure the House to do so as well. Here's helpful information on who to call and what to say.

What can your Internet Service Provider (ISP) do?
They can commit to uphold net neutrality. We pay increasingly more money to companies like AT&T, Comcast, and Spectrum for our Internet service. They enjoy a regulatory freedom which permits them to cherry-pick where services are available. This type of digital redlining results in rural and low-income communities having access to fewer broadband providers, and slower internet speeds at exorbitant prices. ISPs serving San Antonio can commit to refrain from throttling our data and prioritizing services until every neighborhood in San Antonio has access to affordable high speed broadband access. Some broadband companies, like Sonic, already pledge to respect their customer's equal access to the Internet. They have pledged to protect the privacy and data of their customers, and permit access to all content and any applications at all times. As paying customers, we have a right to be heard by our ISPs.

What can San Antonio City Council do?
They can pass a resolution to protect net neutrality. It might not be policy binding, but we can set the standard. It is critical that our city leaders speak up to let our leaders in Washington know that we expect the Internet to be protected by net neutrality. Two weeks before the FCC voted to repeal net neutrality, Philadelphia became one of the first cities in the country to pass policy position on behalf of their municipality addressed to the President, Congress and the FCC urging them to protect net neutrality and open Internet access for all consumers and businesses.

What Can Your State Legislators Do?
They can pass statewide net neutrality legislation. States such as New York and California are planning to introduce legislation that guarantees residents in those states have access to Internet that is protected by net neutrality.