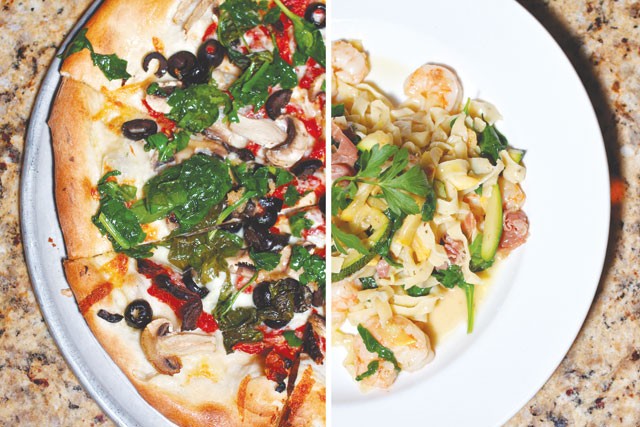 Before I forget, here's this: AQ = as quoted. More on this later.

With its glittery light fixtures and large, leather-look sofas facing a prominent stage, Franco's Italian Restaurant & Lounge looks for all the world as though it would really rather be a bar first, restaurant second; pictures of Sinatra and other Rat Packers only reinforce the notion.

Cocktails such as Franco's Negroni with vodka, Campari, Sprite, and lime raise questions of just what kind of drinks can be expected, but the solo guitar player on a Wednesday night (Fridays and Saturdays get more active) was perfectly acceptable in a dinner-music kind of way.

And yet, the menu does suggest at least a little ambition in the kitchen. Some lunchtime, house-made chips with melted gorgonzola and a balsamic reduction may almost be overkill, but they were also almost addictive. A dinner antipasto order of clams and mussels — your choice of marinara or white wine and lemon — was, on the other hand, routine: tender enough mollusks (though maybe few for the $10 price), decent wine broth, more toast "points" needed for sopping.

On the evidence of the bucatini, a fat spaghetti with a hollow center not seen often in these parts, the chef takes some pride in his paste. It was properly cooked, the rustic marinara had some attitude, and the shaved parmesan was a welcome change from the finely grated, previously packaged product. At the luxury end of the pasta section, you can go all out with $16 jumbo lobster ravioli tossed with a sugo roso spiked with vodka. I think I might stick with the less-grand whole wheat penne with grilled zucchini, tomato, and olives, however.

I say this because of that AQ order alluded to above. It was said to be pan-seared fresh flounder served over a bed of truffled lentils and topped with a "drunken" fennel sauce. I asked the price, the waiter went back to the kitchen to inquire, I was then told $19. Sold. Not so fast. After the Antinori Chianti I had ordered arrived (thinking truffle and fennel more than flounder), the waiter then returned to announce that the kitchen was out of the flounder it had previously quoted. (Are you as perplexed by this as I am?) The chef could do the same with snapper, however. Fine.

It should be said that the snapper was an ample and perfectly reasonable substitute — properly cooked if just a touch dry. Part of the reason for the dryness was that the anticipated drunken fennel sauce seemed to have morphed into a light gloss of lemon butter. When asked about this, I was brought some shards of aggressively fried fennel. The lentils were great, however, as were the accessory spears of grilled asparagus. Perhaps AQ can mean "awfully quirky" as well.

Another of Lorenzo's schizophrenic aspects is that its pairing with next-door, and interconnected, Naples Pizza adds to the speculation of what the place(s) really wants to be. Ours not to reason why but only to order. The pizzas, said to be cooked on stone in a 650-degree oven, are nicely browned on the bottom, though not notably crisp and bubbly. The white-style Campagnola is adorned with thin slices of fresh tomato, bits of canned artichoke, pieces of grilled asparagus — and not quite enough garlic. Red pepper flakes are welcome, as this is a more-subtle production than, say, the Tex-Mex model with grilled chicken, jalapeños y más. I liked it when hot; the charm was lost when cold. Playing a game of spot-the-outliers in the menu, I noticed a panino of chicken with fresh pear, gorgonzola, and fig jam for next time.

Temperature should matter less in this case.

Halloween Night at Franco's
Franco's celebrates Halloween in ghoulish style with a live music by Tejano diva Pasty Torres and the Blue Harmony Band, food and drink specials, a costume contest with prizes, dancing till midnight, plus special appearances by Dracula, the Werewolf, and other spooky stars "dug up" from the past. $10 ($5 with dinner reservation), 9pm Wed October 31, Franco's Italian Restaurant & Lounge, 10003 NW Military. For reservations, call (210) 479-2670. — Bryan Rindfuss