Call it an unfair comparison, but I’d be willing to bet that 3-month-old Franky Diablo’s on Roosevelt has accomplished much more in its short lifespan than any 3-month old human could ever hope to achieve.

For starters, the South Side bar has a far more extensive alcohol selection than even the more curatorial newborn. And when it comes to composed shots — tiny alcoholic drinks that I like to think are simply toddler-sized cocktails — Franky Diablo's has the market unquestionably cornered.

Take, for example, their delightfully sweet Mexican Candy ($4.50). The drink, four ounces of a liquid so unnaturally colored that I was only able to identify it as Rhodamine Red with the help of a Pantone chart of magenta hues, is precisely the flavor that I have grown to associate with embarrassingly drunken nights.

Composed of tequila, watermelon puckers, sweet and sour and chamoy, the shot's neon flavor is electrified by a syrupy delight vaguely reminiscent of what watermelon would taste like if it were farmed in Candy Land. Cutting against the saccharine viscosity, tequila and chamoy sweep the leg and bring the drink back down to a stratosphere more suitable for the palate of an adult. Follow the quick slurp down with a bite of lime, and you have a drink on your hands worth ordering two more of.

For those opposed to the juvenile delights of fructose, put your faith in the Flying Chancla ($4.50) to swoop in and save the day. A veritable who's-who of the lip-puckering scene, the Chancla owes its astringent tart to a combination of pickle juice, chamoy, vodka and lime.

I am unfortunately torn between recommending the Chancla for a romantic night out and declaiming it, as arguments could realistically go either way. On the one hand, I can think of few things in the world I'm less biologically repulsed by than the sour humidity of acidulated breath. The thought of puckering up pre-puckered lips is nauseating on some deep evolutionary level. 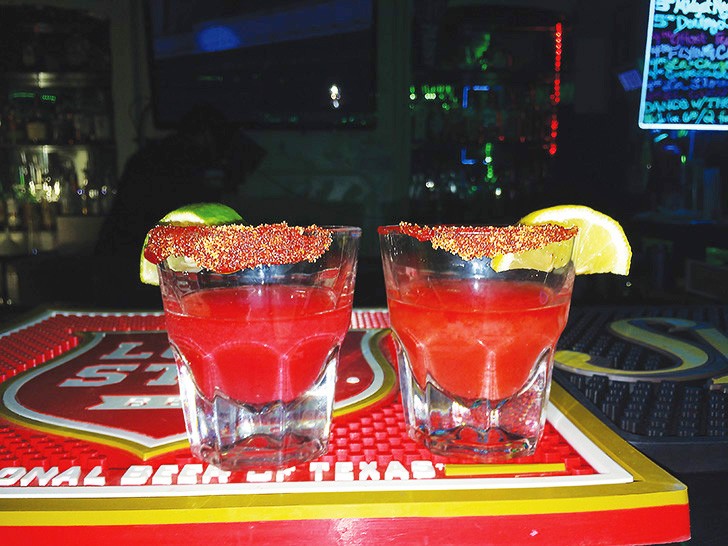 On the other hand, if a date were discouraged by any single part of the Chancla — especially the pickle juice or chamoy — I would at least appreciate the drink's divining-rod ability to separate the soulmate wheat from the one-date-only chaff. Personally, I loved the taste, though it's nothing if not assertive. If subtlety and nuance of flavor is more your M.O., you can at least appreciate the shot for its merit as a compatibility test.

But, let's entertain the notion that no matter how convincing of a case I've made for the bar's infant-friendly selection, you're still in the mood for an adult-sized drink. Not to fear: Franky Diablo's assorted alcohol selection is impressive in both breadth and depth. Their beer board, riddled with comforting numbers like $2, $2.50, $3 and $3.50, is doing the Lord's work. Their reasonably priced offerings range from the mainstays — Lone Star, PBR, Shiner — to the more adventurous — Otra Vez, Power & Light, Coney Island Root Beer — all within the blink of a wallet fold. In a city beset by the price-hiking scourge of gentrification, Franky's beer list is a place of sub-$5 refuge.

For those with liquor on the brain, the calavera-laden dive gives you plenty to mull over. Roll the dice with less pedigreed brands for a humanitarian $4, or put on airs with the likes of Buchanan and Bulleit for a still-square $6. Everywhere you turn, you'll find yourself surrounded by confounding, agreeable prices.

Despite the bar's laudable alcohol variety, the real breadwinners are clearly their inventive mixed drinks and shots. Though the Chancla and Mexican Candy are two of their most popular concoctions, they're merely the tip of the inebriating iceberg. If Russian Roulette were a list of signature drinks, it would read like Franky Diablo's creations. On two weeknights, the bar featured items such as the Midget Mansion ($5), Donkey Lady ($5), La Lechuza ($4.75) and a Two-for-$10 Dance with the Devil.

If you were in the mood for a slightly less soused night out, the space offers plenty to do besides drink. A massive projector screen plays host to their retro Sunday night Mario Kart competitions, a side room boasts several pool tables, an inviting patio area sits outside the eastern end of the bar and every Monday night Diablo's has an open mic. If you were keeping count, it would seem as if the bar has everything you could ever want except for one critical component — food.

Fortunately, their next door neighbor on East Mitchell Street is a 24-hour taco joint called Ric-Ron Taco House. The restaurant serves breakfast at all hours of the day, and after three too many shots of whatever an El Cucuy is, you'll be happy knowing that $1.19 papa and chorizo tacos are waiting just a stumble away.