For Barbara Bowie, it was when her mother died after waiting 8 hours for every white patient to been seen by an emergency room doctor. For MacArthur Cotton, it was seeing a black sharecropper shot by his white boss for going to church instead of plowing his fields. For Kredelle Petway, it was meeting Martin Luther King, Jr. at the March on Washington. For Fred Anderson, it was when his 13-year-old cousin was killed by white men.

For each of the four Freedom Riders who visited San Antonio last week, there’s a moment in time when their drive to join the civil rights movement of the 1960s crystallized. A flipped switch, one that encouraged them to hop on an interstate bus (or, for some, airplane) and travel into the segregated south on one of many "Freedom Rides" to protest the government’s non-enforcement of anti-segregation laws and register African-Americans voters.

Bowie, who grew up in Jackson, Mississippi, describes the moment she learned her mother had died in the hands of white doctors — who had prioritized white patients' health over her black mother’s.

“That’s when I realized the movement was something that we all needed to be involved in,” said Bowie, who now lives in Kirby. “It wasn’t just about getting on the buses and going to the white soda fountains and doing the sit-ins. This was about our life and death. Because nobody cared about our lives.”

Bowie is now 70 years old, but the way she describes this culminating moment in her teens evokes present-day sentiments. Over the past few years, we’ve seen the same response to other traumatizing deaths of African-Americans, like Trayvon Martin, Eric Garner, Sandra Bland, Marquise Jones, Antroine Scott — the list goes on. It’s why hundreds crowded the streets of Ferguson, Missouri in 2014 and Baltimore, Maryland less than a year later. It’s why San Antonians held the names of black Americans killed by police during this year’s Martin Luther King, Jr. parade. It’s also why Bowie and the three other Freedom Riders who visited San Antonio say they see little difference between the movement they joined and current civil rights movements, like Black Lives Matter.

On Friday, the Current met with the four activists to learn what has changed — and what hasn't — in the movement for African-American equality. 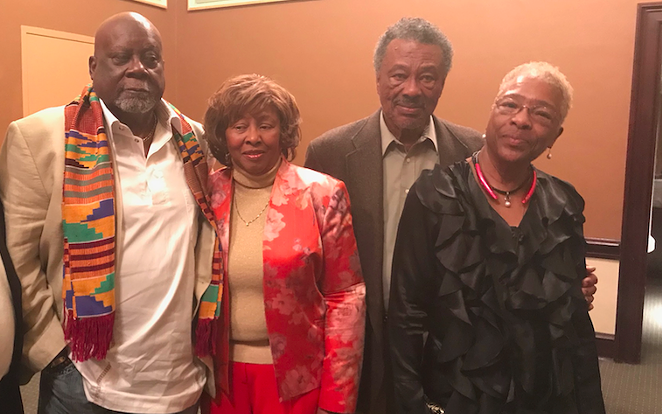 When Anderson was 15, he joined the Student Nonviolent Coordinating Committee under Stokely Carmichael and now-Congressman John Lewis. He rode in the front many busses, spent weeks in jail, and was a victim of police brutality. Anderson, who has since moved to Canada, said he’s familiar with what he calls the “disinformation campaign” trying to undercut the meaning and success of BLM. At SNCC, he regularly faced criticism from the government, mainstream media, and even other groups within the civil rights movement.

“The criticism they threw at us was, ‘Oh you guys aren't' as organized, aren't as structured as the other major organizations. You're too decentralized. You're too undisciplined,’” Anderson recalled. “We didn't have that top-down leadership that the other major civil rights organizations had. It was democracy in action, because everybody spoke up. Sure, it would take much longer to come to decisions … everybody had their say, sorted out their disagreements and they reached a consensus as to what we wanted to do. People said we had too many leaders.”

“They didn’t like it because they know who to kill,” Cotton said, with a laugh.

Even the media coverage of the Freedom Rides of the early 60s mirrored the critical coverage BLM has received in the wake of protests (or, what some publications have dramatically called "riots''). Anderson said that's why so many black organizations created their own magazines and recorded their own data to counter the media's warped perspective.

Cotton met Anderson through SNCC in Mississippi, where they went door-to-door getting people registered to vote. The leader-less organization reminds them both of how the BLM movement came to be (and came to be criticized). Cotton said what’s missing in so many of the conversations around civil rights movements, especially BLM, is perspective. Black Lives Matter, SNCC — these groups are just a piece of a continuous fight for African-American rights.

By the time the '60s rolled around, he said, everybody generally knew about the movement was all about.

On their whirlwind San Antonio trip, sponsored by Greyhound, the four visited churches, panel discussions, and a handful of middle and high school campuses to share their stories. Anderson said a common audience question was if the time he was involved in the movement felt worse for African-Americans than it does under the Trump Administration.

“Was it worse then? Yes. Is it getting worse now? Yes. Can it become even worse? Yes,” he said. “In the '60s there were voices — even as all of those gains were being made — saying that this is a perpetual cycle, and if you don't keep your foot on the pedal, not only will you not make further progress, you're in danger of the progress you've already made being rolled back.”

Petway’s afraid that the current administration may be doing just that.

Petway, 77, was 17 when she first became involved in the movement, shortly after attending the March on Washington. On breaks from college in Florida, Petway would return to her hometown of Montgomery, Alabama and help semi-literate residents shed their fear of voting. She, along with her father and brother, were arrested after flying into Jackson for “breaching the peace” by using a white-only water fountain. For a long time, she had been hopeful that her hard work had permanently changed history. But now, she’s not so sure.

“Although we thought we had gained a lot of inroads, [the country] is spiraling swiftly downhill into many of the same types of injustices that were present during the time of the civil rights movement,” Petway said.

Unlike the three other Freedom Riders she toured San Antonio with, Petway’s cautious to embrace BLM as a success. It’s still lacking a cohesiveness she saw in civil rights organizations in the '60s. Regardless, Petway’s still confident the younger generations will continue the fight.

“The kids we spoke with this week, they asked very insightful questions, they showed a lot of maturity and interest in their future,” Petway said. “It gives me hope.”

“They’re a lot better than the adults,” Cotton added.

The information they’ve shared with students — how to organize a movement, why it matters, how it can be successful — it's not information kids can expect to learn from history books. But during the Trump era, it is information the Freedom Riders say matters most.

"Look, we're all getting a little old. But these kids need encouragement they're not getting from their teachers or parents," Bowie said. “They need to know they can make a difference. So, I don't think we can stop."