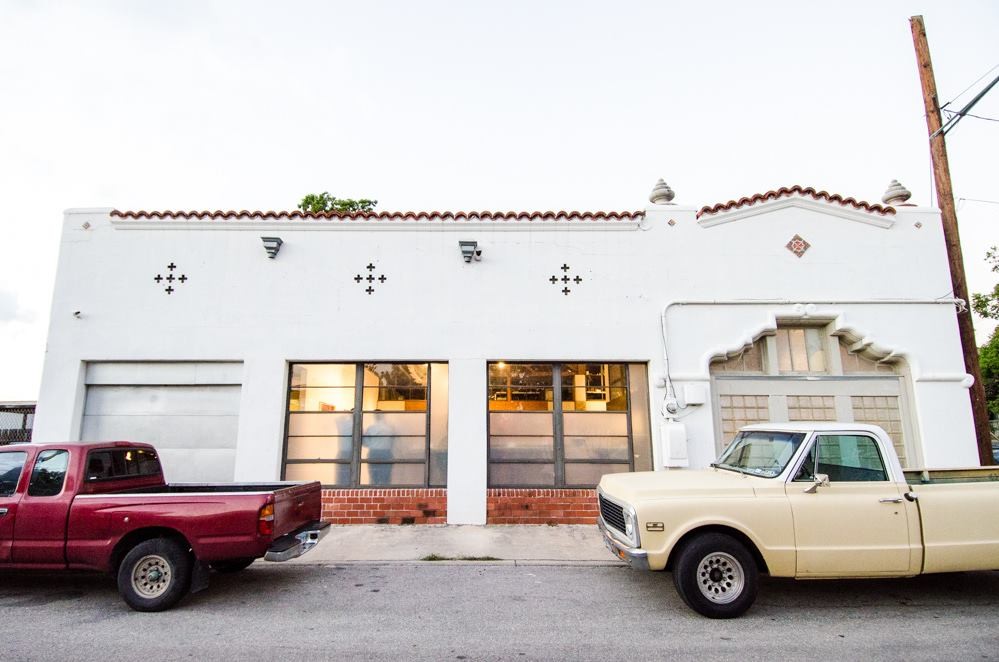 Sure it's an overused phrase, but "meeting of the minds" feels especially true when it comes to French & Michigan, a multidisciplinary endeavor that combines the complementary talents of Billy Lambert, Céleste Wackenhut and a solid crew of collaborators.

After graduating from UTSA's College of Architecture, Lambert taught at the school for eight years and "always had this desire to support architects and designers through a gallery." Arriving in San Antonio fresh out of grad school in Scotland, Wackenhut landed a Semmes Foundation Internship and then a full-time job at the McNay (working between curatorial, marketing and publications) yet never saw herself moving "into the commercial gallery realm."

Initially an outgrowth of Lambert's Southtown-based design studio, the ambitious duo's collaborative venture French & Michigan didn't adopt its name until they moved into a 1930s-era building in Beacon Hill at the corner of French Place and Michigan Avenue.

During its 80-year history, the structure has functioned as everything from a chicken coop to an automotive shop while maintaining a fairly Kafka-esque relationship with city zoning. So when Lambert and Wackenhut (with the support of building owner Jeff Dersh) set plans in motion to have the building rezoned to accommodate office space, an art gallery and a small apartment, a well-publicized saga ensued and dragged on from August of 2013 to November of 2014 (including a six-month hiatus). 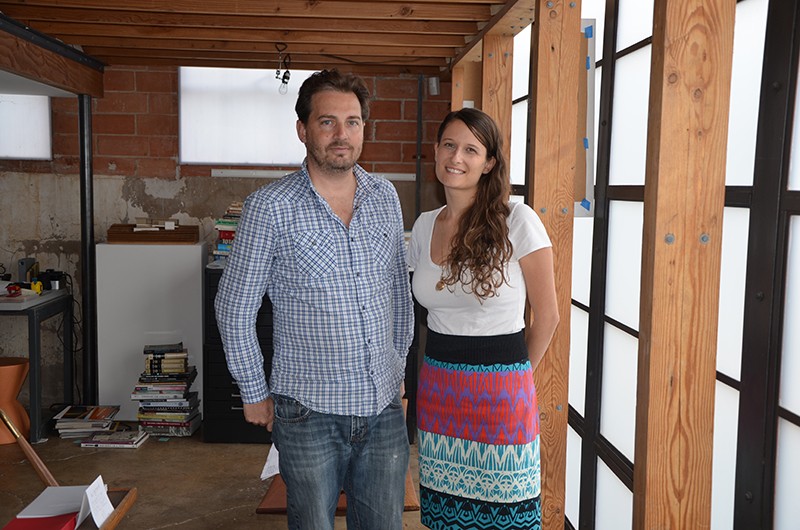 Now successfully rezoned as a residential building with a conditional use for an art gallery, French & Michigan Gallery is but one component of an operation "devoted to strengthening collaboration between art and design through the development of a visual and built environment." In addition to the Beacon Hill gallery, French & Michigan now encompasses a design-build studio and workshop on South Presa and an online writing platform incubating the forthcoming print publication FAM. A Southtown residency program is also in the works.

Wrapping one's head around how all this fits and works together is no easy task.

"A lot of people didn't get why a design studio [is] collaborating with an art gallery as one business," Wackenhut told the San Antonio Current last week. "The beauty here is that I can do all of the marketing for the gallery [and] the rest of the business and then what they give is their design expertise in terms of installing the art ... It's a nice little marriage. There's a lot of intertwining that was surprising that I don't think everybody expected."

In an effort to better understand the various pieces of the ever-evolving French & Michigan puzzle, we caught up with Lambert and Wackenhut at their Beacon Hill gallery. 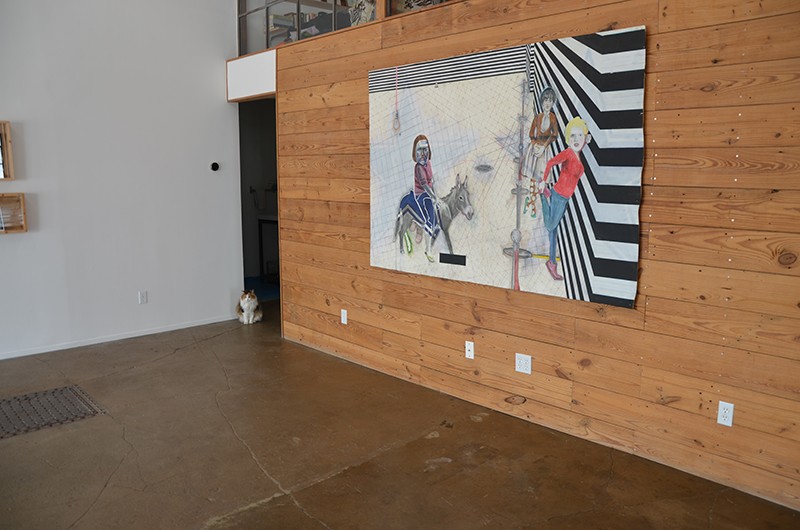 How many artists do you represent right now?

CW: So we currently represent 11 and then we have two who we call inventoried artists ... So when we say we represent an artist ... we really try our best to have them communicate with us ... If it is that they're working on a major project and they need funding then let's try to find that grant ... Same with residencies, fellowships.

And your goal is to do four exhibitions a year?

CW: We kind of work with the seasons ... so in the fall and in the spring I always try to do a solo exhibition of one of our represented artists and we do a catalog ... What we hope to do is every winter [have] a larger community exhibition where we can invite 30 to 50 artists. What we've been able to do with that is that I get to know artists that are outside of our representation and that might turn into representation a year later.

So does the studio work with architects?

So when we say "studio" we're really talking about built structures.

BL: Yeah, it's a design studio headed by Barbara Warren. We have great relationships with contractors, too. They love the energy that we can provide them. It really gives them kind of a friendly place to work with instead of a competitive place to work with. It's all really about cultivating these relationships to make all these beautiful things happen.

CW: I think Billy's really good at realizing people's strengths, and so he'll often look at a project and say, we need to bring in this subcontractor who's really good at x and that allows us to really create a friendly environment as opposed to a competitive one.

When did you launch the writing platform?

CW: So FAM we launched almost at the same time as the F&M Workshop in January of this year. The concept is something that Billy's been thinking about for a long time.

BL: Writing has always been extremely difficult for me. So I've always been amazed at people who can write, tell stories, narratives, and I've always been drawn to them. For writers, it's always been a struggle to get work that pays ... We kind of felt that if we were going to be doing this sort of multidisciplinary work there has to be a contribution to the writers ... Without a strong community of writers, you cannot have a strong cultural community to help document it [and] bring insight to it.

So does that mean you pay your contributors?

Is just one writer featured in each issue?

Several writers are published online for each issue. Then we put a beautiful magazine together ... a print edition of all of those pieces ... For this first issue of "Residuals," which is the theme, we want the writers to have as much leeway as possible. I even have talked to writers about ... that thing that you've worked on that you love but you can't publish in a typical journal. We're interested in that because those are labors of love, those are the stories that writers have put their heart into.

BL: It's a way to explore ideas through a new medium which I technically can't do.

What happens in French & Michigan Workshop?

BL: Designers and architects tend to be removed from the direct process of making things ... We felt we couldn't have a design studio without interconnecting it with a place to make the stuff ... We also knew that we wanted to incorporate certain things into our designs that were too expensive to commission people to do but that we could do if we involved them in the design process.

What are some of those things?

BL: Our workshop manager Joseph Duarte oversees the making of furniture pieces, concrete pieces, cabinetry ... So what the workshop allowed us to do was bring in an entire different body of people who design through making ... When we have a design meeting we have people sketching out ideas, and there's someone literally like bending metal and welding at the conference table, and it changes the way you look at everything.

Are most of the things you're making commissions or do you create things to sell?

BL: I went through two different downturns in the economy ... People stop architecture projects instantly ... and so one thing we really wanted to do was make lines of home goods that you can produce using the principles of the economy of scale mass production. So you don't build one bench, you build 20. Then when you have a slow day, you have something to do. You build up the inventory and you learn how to make something rapidly.

So the workshop shares space with the studio?

BL: Yeah, it's divided by six millimeters of plastic.

CW: There's a lot of back and forth between the two and ... they are steps away. It's like a research laboratory almost. We call it a test kitchen sometimes.

What's the idea behind the French & Michigan Residency?

BL: Where the residency is now, that's my old house (in Mike Casey's compound with Sala Diaz) ... A lot of artists came through, there's a lot of backyard chats, and there was a certain experience I got from that ... Everything I learned was a balance between going to school at UTSA and living at the compound. It's a sort of experience that Mike Casey provided for me and a lot of other people. I really want to work hard to make sure that that experience continues on for graduate students at UTSA.

BR: So there would be three residents at a time?

BL: Three at a time and they stay there their entire graduate school.

Is it active yet?

CW: We're in the application process.

BL: We have one student committed that they're going to do it. And hopefully we'll have three by the fall.

Would they create something while they're there?

CW: It's their graduate school studies ... It's an opportunity for these graduate students to be exposed to an active, urban, creative community ... It's an opportunity to look at urban planning and urban living in a way that's not a cookie-cutter apartment. It's an old house. What does it mean to live in an old house and share this enormous backyard with the community? It'll be less that they're producing something and more that they'll be contributing something to this community.