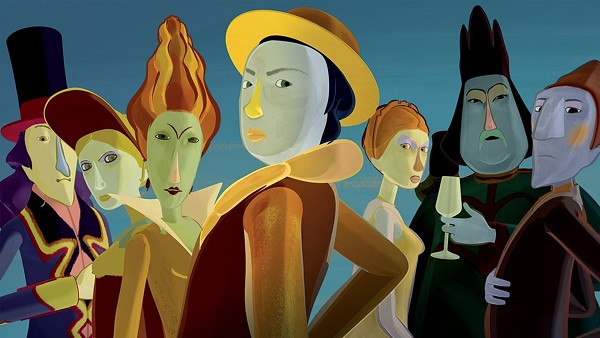 Visit any artist’s studio and you’ll likely be privy to an unfinished project or two, some of which may never be fully resolved. An artful exploration of that limbo-like state of affairs, French writer/director Jean-François Laguionie’s animated film The Painting (Le Tableau) brings to life a colorful crew of characters in varying stages of completion. Distinguished by a vintage sensibility and an orchestral score by Pascal Le Pennec, the film follows an unlikely trio of friends as they leap from the canvas into a series of other paintings in search of the maker who’s mysteriously abandoned them. On the surface a simple story surrounding star-crossed lovers Clare and Ramo, The Painting slyly addresses tolerance and classism through the dynamics between the self-righteous Alldunns, uncolored Halfies and roughly rendered Sketchies — a scorned breed some would prefer to erase. SAMA screens the English-language version of the 2011 film as part of its outdoor Family Flicks series. Blankets, lawn chairs and picnics welcome. Free, 8:20pm Fri, San Antonio Museum of Art, West Courtyard, 200 W. Jones Ave., (210) 978-8100, samuseum.org.