Frisch's 'Firebugs' offers clarion call about fundamentalists in Iran and the U.S. 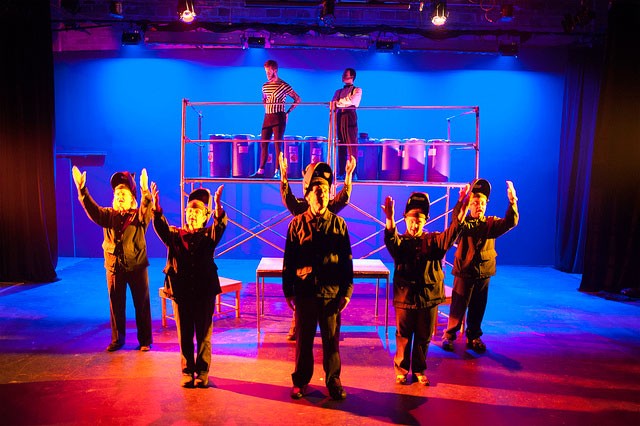 Swiss playwright Max Frisch subtitled The Firebugs, a 1953 radio play that was adapted to the stage in 1958, A Learning-Play Without a Lesson. However, denial of didactic intentions is as disingenuous as Huck Finn’s warning that persons attempting to find a moral in his story will be prosecuted. Like the Greek drama it parodies, Frisch’s absurdist play contains a Chorus, vigilantes who spy on the neighborhood and issue sententious remarks. When a member of the Chorus proclaims: “Nothing is more useless than this useless story,” the playwright is mocking his own mockery, suggesting that there might after all be a lesson to be learned from the wise buffoonery that fills the stage.

Two suspicious strangers insinuate themselves into the household of Gottlieb Biedermann, a wealthy businessman. By massaging his vanity, they cajole him into letting them stay in his attic, which they then fill with drums of flammable fluid. By the time Biedermann realizes that his guests are arsonists, it is too late. All that is left for him to do is hand them the matches to burn down his house.

In the 1950s, it was easy to see The Firebugs as an allegory of the rise of Nazism, facilitated by the fecklessness of ordinary people (a Biedermann in German is a conventional man). As if commenting on how Adolf  Hitler’s monstrous plans, spelled out in Mein Kampf, were underestimated, Robert Gonzalez’s Will Eisenring, one of the two firebugs, observes that: “The best camouflage of all is the plain and simple truth, because no one ever believes it.” Frisch’s play resonates today in Iranian President Mahmoud Ahmadinejad’s vows to annihilate his enemies and Christian fundamentalists’ stated aim of creating an American theocracy. Biedermann’s condescending claim that: “I don’t believe in class differences,” even though he exploits his workers, parallels a current candidate who prospered by putting Americans out of work but accuses his opponent of fomenting class warfare. For the left and the right, the lesson to be learned from The Firebugs is: Beware of strangers bearing fuses and detonators. This play cautions that an absence of caution is fatal. Yet an excess of it paralyzes. It creates the universal suspicion spread when dour fire marshals circulate among the audience aiming flashlights and a wary eye.

Eugene Ionesco must have known Frisch’s work when he wrote Rhinoceros, a 1959 play in which every human but one turns into a large horned creature. In her inventive, stylized staging, director Diane Malone acknowledges the role that The Firebugs played in developing the Theater of the Absurd. Biedermann, played by Tyler Keyes with a pencil-thin mustache and a Dudley Do-Right stentorian voice, reads a newspaper whose pages are clearly blank. The food that is served is air-cuisine, and one of many delights is watching Dru Barcus’ Josef Schmitz, a brassy tattooed wrestler who worked for the circus until it burned down, chomp away at imaginary roast duck. Christie Beckham plays Biedermann’s wife Babette as a high-heeled Betty Boop.

“You have to have a little trust in people,” insists Biedermann, who misplaces his trust and the household silver. Trust this production for a loopy look at the twin destructive shoals of gullibility and doubt. As the Chorus insists, responsibility for conflagrations lies with individual actions, not an abstract fate. The lesson of The Firebugs lingers in Biedermann’s plaintive question: “What would you have done?”

The Firebugs By Max Frisch