From An Elvis Impersonator To Clocks, Texas Has Its Share Of Odd News

Texas is large and is in no shortage of odd news and crime.

Perhaps the strangest event in the state this week hails from Irving, Texas where a 14-year-old was arrested for bringing a homemade digital clock to school in an effort to impress his teacher, who rewarded his curious ingenuity by telling police she thought he brought a bomb to school.

The teen, Ahmed Mohamed, was interrogated by police who determined he had, in fact, been telling the truth all along when he told his teacher and investigators that he built a clock. Somehow, this kid is still suspended for three days.

The good news is he's transferring schools and police, obviously, dropped the charges. 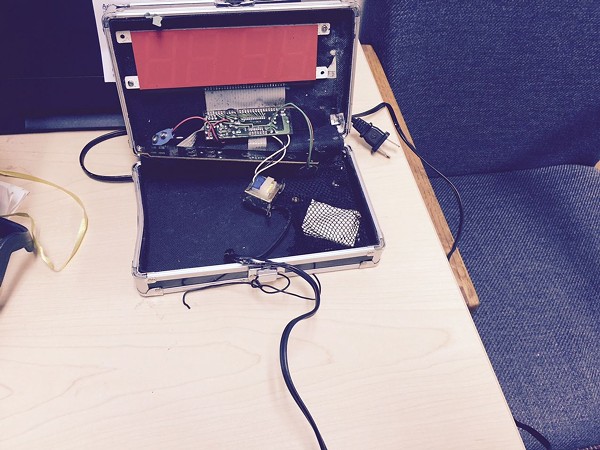 While Ahmed's story is strange, it's also nice because now the kid is going to meet the president, with his clock, at the White House. Not only that, all the attention is sure to help him out with college prospects.

A little closer to home, in San Antonio, an age-old summer tradition sadly continues with 41-year-old Roland Gonzales, who happens to be a possible repeat offender if convicted — though, you could say, he was caught red-handed.

Gonzales was arrested at an H-E-B this week after loss prevention officers allegedly watched him on camera as he stuffed a little more than $100 worth of steak into his pants, the San Antonio Express-News reported.

The 41-year-old was apparently known to loss-prevention staff, according to the newspaper.

Down in the Rio Grande Valley, another theft suspect brings a whole new level of impersonation: collecting rent like a landlord and pretending to be Elvis (not at the same time).

Chad Andrew Roy, 39, pictured above, was arrested in Harlingen, Texas this week on charges that he collected more than $80,000 in rent on properties he didn't own.

According to the Harlingen Police Department, Roy allegedly accumulated the rental fees during a four-year period on properties behind the back of a business that owned the properties.

Roy is no stranger to the Rio Grande Valley. He is a well-known Elvis impersonator.

Hopefully he doesn't skip bail, because you know they'll send the hound dogs after him and then he'll be crying all the time.