From Ditches To Riches: The Artful Restoration Of San Pedro Creek

As San Antonio boomed over the years into one of the largest cities in the country, concrete became a symbol of success.

The Alamo City's massive system of highways that connect this sprawling metropolis might be the most visible reminder of its growth. But that same concrete is just as common — and extensive — in San Antonio's drainage network, which includes historic San Pedro Creek.

It's starting to change in and around the urban core, but much of this paved maze of drainage and road that now stretches farther than ever actually never took in aesthetic concerns.

That's about to change.

A plan is in the works to restore grubby San Pedro Creek, a utilitarian drainage creek, into a park for locals and tourists to enjoy green space, walking trails and public art.

Much has been talked about in local media regarding the economic impact of the San Antonio River Authority-led restoration project. Same goes for its architectural and urban planning aspects. And of course, its funding — $125 million from Bexar County — has made headlines.

But what about public art? Where will it come from? What will it be?

Truth is, restoring this two-mile, 22-acre stretch of San Pedro Creek will take three years — its completion timed with San Antonio's 300th anniversary in May 2018 — and it's now in its nascent stages.

Lori Houston, director of the Center City Development and Operations Department, said Muñoz & Company — the lead architectural firm on the project, led by Democratic Party bigwig Henry Muñoz— has created a curating process to help identify the type of art that will adorn the walkable creek.

"This process will also go through the city boards and commissions necessary," Houston told the San Antonio Current, noting they'll help guide the curatorial committee to make sure the art is appropriate and maintained.

The City of San Antonio owns San Pedro Creek and when everything is said and done, it will own the art much like it does along the River Walk's Museum Reach — another wildly successful outside-the-box approach to restoring inner city waterways.

"I think that just like the Museum Reach urban segment, this is going to be a major catalytic project," Houston said.

The installation includes 25 seven-foot-long hand painted anatomically correct long-ear sunfish, which are native to the San Antonio River, suspended under the I-35 overpass near Camden Street.

"They light up at night," Owen explained. "And if you go to that part of the River Walk on any evening of the year at dusk, you will see people gathering to watch the fish light up." 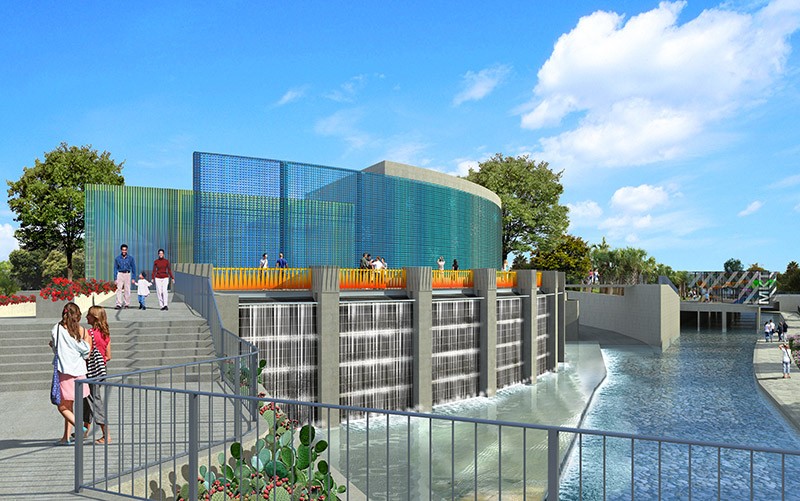 It's pieces like F.I.S.H. that are accessible to everyone and of high quality that help establish urban artistic sophistication.

"When we think about places that are memorable to us, they often include some kind of icon, some kind of symbol that is encompassed within public art," Owen said.

Not only that, public art activates and invigorates spaces — particularly neglected spaces — making them appealing to businesses and people alike.

"We want San Antonio to be as culturally significant as other major cities," Owen said. "So the more high-quality public art that we have, the more it will help accomplish that goal."

Emphasis on high quality. Otherwise, a public art project can turn into a boondoggle.

"You know, it could be great and it could be awful. It always depends on whose hands transform the material," Owen said.

But it also depends on the space and restoration plans call for a wide variety of spaces, including picturesque walkways, like Paseo del Rio. Then there are the ribbons of life, which will incorporate aquatic and riparian planting areas that will support essential species while stimulating the human senses.

Iconic pavilions will be built — think Joske Pavilion at Brackenridge Park or the pavilion in the Japanese Tea Garden.

The driving design principle behind all of these moving parts is called Urban Latismo, a concept that blurs the lines between indoor and outdoor through the common and the exquisite.

"We view the creek as a garden, a healing composite of living offerings that with great thought and care will nourish us for years to come," a 2013 San Pedro Creek engineering study states. "By listening to the language of San Pedro Creek, its story will be shared via art and cultural components unique to our story."

The concept also values sustainability as a means to express San Antonio's culture through repurposing, reusing and recycling common materials.

So the landscape that will house public art — an outdoor museum, so to speak — will transform non-descript architectural features found in San Pedro Creek into a celebration of culture, craft and the commonplace.

Those everyday features that are easy to overlook include eight city street bridges slated for replacement, six new pedestrian bridges and rehabilitation of six other bridges.

"Yielding both comfort and delight, it pushes us to strive for more with less, yet still preserve the goals of maintaining a strong cultural and historical response to the design challenge 'El Arroyo' poses," the 2013 study states.

That's where the San Antonio River Authority's Russell Persyn, the restoration project manager, brings in the science that will dictate how the space will change.

"Historically, if you looked at when the creek was channelized, one goal was to improve flood control," Persyn told the Current. "And we were successful, but it was at the cost of portions of the ecosystem."

Looking back, he said SARA would have treated San Pedro Creek differently in terms of including public art and green spaces to preserve the ecosystem.

"We now better understand public investments can create multiple benefits from quality of life to connectivity to revitalization," he said. "We've become smarter at having multiple benefits and have been at the forefront and taken a leadership role in doing that."

But it's no easy task. The San Pedro Creek is part of a 100-year floodplain.

"With the proposed design, we'll be able to contain it," Persyn said.

The floodplain is a benchmark that Persyn uses to assess flood risk, which plays a role in the design process.

"In this case, we're designing the channel to limit our risk," Persyn said. "That doesn't mean there's not an event greater than that, but it's a level of risk we've assessed and decided is acceptable for the community."

But simply deepening a channel, digging drainage tunnels and paving over parts of creeks and ditches is no longer acceptable. It's clear to city leaders that San Antonians want more from their environment in terms of art, walkability and green space.

"It's an exciting time. While we're growing, we tried to make that growth in a way that maintains quality of life with respect to our city's culture and history while not styming progress. Sometimes all those things are delicate to balance," Persyn said.

And with successful restorations in the Museum and Mission Reaches, which included quality of life improvements as well as public art, it appears city leaders are listening.

San Pedro Creek, part of the city's original drainage system, is slated for a years-long upgrade that some say will eventually turn it into SA's second River Walk, as seen in these artist's renderings.

From Funding To Fruition: A Timeline of the San Pedro Creek Project

May 2018: San Antonio is 300-years-old, construction should be finished