From the Archives: Selena: A Star Dies And An Icon Is Born 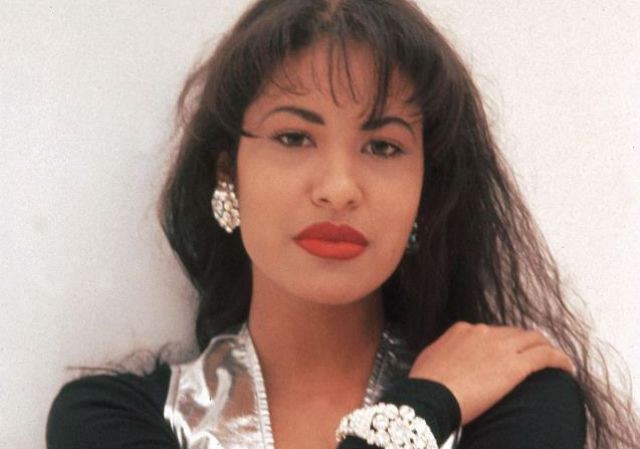 Today, March 31, 2015, marks the 20th anniversary of Selena Quintanilla's death. The following article was originally published in the November 2, 1995 issue of the San Antonio Current, a mere seven months after the beloved Queen of Tejano's life was tragically cut short. In it, Bill Ramsey examines Selena's elevation to icon status in the aftermath of her murder and the growing fandom that gave rise to the cult of Selena.

In last week's issue, Current Music Editor Matt Stieb explores Selena's influence and legacy two decades later, and he finds that love and adoration for the South Texas legend remains stronger than ever.

In the first few days after Selena’s death, the resurrection occurred.

At a flea market north of San Antonio, T-shirts of the slain singer’s likeness lifted from a newspaper photograph were selling briskly.

Near downtown San Antonio, at the boutique once managed by her killer, throngs of fans gathered to mourn, genuflecting before the closest thing they had to a shrine.

A candlelight vigil at Sunken Garden Theatre brought the devoted and the curious together in mass.

The one who in life had been dubbed the “Tejano Madonna” had in death become closer to the Madonna, an idol whose ascension from singing star to spiritual icon happened so quickly that few could comprehend and even fewer questioned. She belonged to her people in a way not unlike Elvis belonged to others, and now that she was dead, her memory was theirs to preserve, to honor, to cherish. While the masses struggled to express the depth of her meaning to themselves and their culture, others quickly grasped what she embodied in eloquent, if somewhat overwrought, soliloquies. “The things that Selena protected were not the things that fall because of gravity,” wrote Boston Globe staff writer Alisa Valdes of the singer’s effect on young Latin women. She caught the things that float in the air just before these young women speak, the things that choke them when their mouths begin to form a sound.” Of her Judas, the impish Yolanda Saldivar, Valdes posited that “It’s possible that Saldivar pulled the trigger like a jealous lover. If I can’t have you, I am no one.”

Surely these emotions might have puzzled, even astounded, the 23-year-old entertainer who walked among us as if — save her infectious incandescence — she was no different from the rest of us; she shopped at Target, she ate at Pizza Hut, she sang innocuous ditties such as “Bidi Bidi Bom Bom.” But what of the things that made her extraordinary behind her talent and celebrity? Certainly she was sexy, but only playfully so. She was the product of a devoutly religious family, though outwardly she exuded no piety. She was married, too, but alarmingly though the specter of scandal was never broached. No, Selena Quintanilla-Perez would have never imagined the religion that was poised to celebrate her in death if only because death was unimaginable. However implausible it might have seemed in the days before March 31, in the reverie surrounding her passing something quite remarkable, if not ironic, befell Selena: as she crossed from the mortal world, even before realizing her mortal dreams, she became immortal — Selena, the Virgin of Corpus Christi.

Selena wasn’t perfect, but she was close. Although she is often remembered for her vocal support for education, she herself left school early to pursue her career. While she embraced the teachings of her religion and the importance of family values, Selena eloped to marry her guitarist, Chris Perez. What she was, in life and in death, was larger than life, and her mere being went far beyond her considerable musical talent.

“She, of course, became bigger than life after she was assassinated,” says Dr. Ruben Candia, who teaches a course at St. Mary’s University called Mexican-American Culture and Life. “She wasn’t Catholic like many of her fans [Selena was a Jehovah’s Witness], but her contributions overshadowed religion. She always took time out to talk to kids, she was a very nice young woman who was a very good role model. I always found the comparison with Madonna [the singer] troubling. There were no similarities; her life was not scandalous.”

What Selena represented most, says Candia, is a concept he calls “Paradise Lost,” in which Latinos desire to recapture a paradise sometimes related to them in the mythic culture of the Aztecs. “When you see something or somebody doing so well, you tend to create an image you want to keep forever. That’s what’s behind the idolatry, that and the custom to not want to forget.”