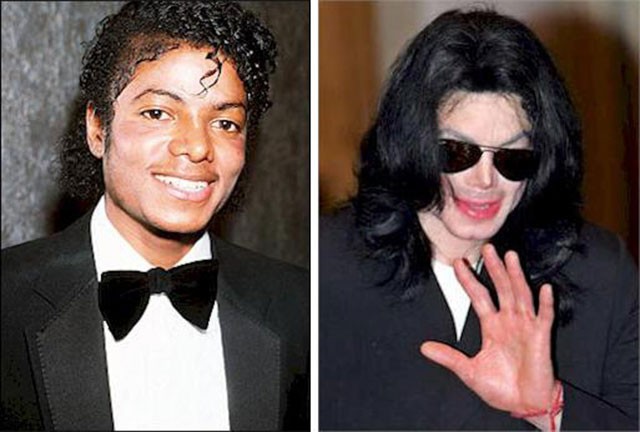 Today, August 29, 2013, Michael Jackson ould have been 55 years old. Yet, we celebrate his memory by re-reading a wonderful piece written by former Current staffer Gilbert García and published in our magazine on July 8, 2009, days after the singer’s death on June 25.

“Why celebrate a person’s birth by going back to the time of his death?” you may ask, and understandably so. The reason is simple: García’s piece is a perfect example of top-notch music writing, and one that recognized the fact you can’t examine Jackson’s death without going through his highs and lows. It was critical and controversial, but it threw no low blows; it praises the man and the artist, but it was far from a hagiography.

I hope you enjoy it as much as we did in 2009. —Enrique Lopetegui

Whatever the cause of Michael Jackson’s death, self-importance long ago killed his career

There’s a little-known Michael Jackson recording that I’ve been flashing back to ever since MJ’s death last Thursday.

It’s a lilting reggae ballad by Austin Tex-Mex cult hero Joe “King” Carrasco called “Don’t Let A Woman (Make a Fool Out of You).” The story goes that Carrasco, then working on his 1982 album, Synapse Gap, spotted Jackson standing in the corridor outside the recording studio, and lured him in to do some backing vocals. Jackson’s harmonies are wonderfully ethereal on this track, with none of the self-importance that we would come to accept from him over the last two decades of his life.

What I love best about the recording, though, is the story behind it. The fact that Jackson, at the same time he was constructing his monumental Thriller album, willingly lent his golden falsetto to a song with little commercial potential, made by an obscure guy that he barely knew, is somehow reassuring. It suggests that while he was never a “regular guy,” Jackson did have a small window of young adulthood when he was approachable, when he wasn’t yet obsessed with his own myth.

There’s a strange thing that happens whenever washed-up pop stars pass away (and don’t kid yourself Jacko fans, he had about as much chance for a career revival as Jermaine). After the brief, obligatory displays of mass mourning, fans start celebrating, because they’re now liberated to reclaim the version of their hero they like best. It might sound cruel to say so, but purely in pop-culture terms, Jackson’s continued existence was an aggravating reminder of his gradual descent into surgical mutilation, creepy bed-sharing with other people’s pre-pubescent boys, and musical irrelevance. As soon as media outlets announced his death, devotees could gather outside the Apollo Theater and belt out “Rock With You” or “Beat It” (notice that nobody sang “Butterflies” or “You Rock My World,” or anything else from this decade).

We saw the same phenomenon with Elvis Presley. His death was surely sad for his friends and family, but it saved everyone else from several more years of watching the fat dude, busting out of his white jump suit, muck up their memories of the young hillbilly cat sexing up the Ed Sullivan Show in 1956.

Any attempts to make sense of Jackson’s off-stage life quickly turn into ludicrous conjecture. Did he have two cosmetic procedures (as he insisted), or 13 (as British tabloids would have you believe). Hell if I know. Did he innocently serve boys milk and cookies and tuck them into bed (as he said), or slip them roofies and fondle them (as LAPD officers suspected). Your guess is as good as mine.

This much, however, is clear. As pop-music critic Touré has noted, the late-period Jackson became a kind of King Midas in Reverse. Everything he touched seemed to go horribly wrong. What must have confused him to no end is the fact that everything that the public loved about him at his peak ultimately became an object of ridicule or derision.

Around the time of Thriller, record buyers were charmed by Jackson’s fascination with kids. In fact, part of the reason he managed to move a record-breaking 25 million units at the time was because he tapped into the elementary-school market with a ferocity not seen again until the dark days of Barney and The Wiggles. Jackson had baby boomers covered, because they’d loved him since he’d been the adorable kid that sang “I Want You Back” with his brothers. Teenagers loved him, because “Billie Jean” and “Beat It” captured the pop moment. And little kids related to him because he was non-threatening and child-like (or childish, depending on your perspective).

For chrissakes, no subsequent displays of public weirdness (with the possible exception of his 2002 baby-dangling episode in Germany) could match taking Brooke Shields and Emmanuel Lewis as his two dates to the 1983 Grammys—and no one batted an eye at the time.

His preoccupation with space aliens and freaks also seemed pleasantly eccentric in his heyday, but after a few catnaps in the hyperbaric chamber, it became obvious that, to mangle a famous phrase from Spinal Tap, there’s a fine line between eccentric and pathetic.

Finally, the naïveté that once made him seem so unspoiled by earthly pettiness started to look like drug-addled delusion, when the fortysomething Jackson could not grasp that dangling your baby from a hotel balcony, just to give cheering fans a quick peek, might be a bad judgment call.

Whatever dramas were going on in his own head at the time, the Jackson of 1979’s Off the Wall was pure grace: brimming with drive, ambition, high spirits, energy, and even sexual confidence. At that time, he seemed able to achieve everything with an economy of effort.

By comparison, over the last 20 years, the harder Jackson tried, the more he screwed things up. Obviously scrambling to rehabilitate his public image after a child-molestation civil suit in 1993, he married Lisa Marie Presley, and no one bought it. When he made a dramatic show of kissing her to lead off the 1994 MTV Video Music Awards, most people either recoiled in horror or giggled incessantly.

When, with the song “They Don’t Care About Us,” he tried to win sympathy for his public humiliation, he unwittingly offended Jewish-Americans with the oddball slur: “Jew me/sue me/everybody do me/kick me/kike me/don’t you black or white me.”

So when did things start to go wrong? There are several reasonable choices: the 1984 Pepsi commercial, during which he not only suffered a burn to the scalp that started him on the road to painkiller dependence (and apparently intensified his interest in plastic surgery), but inexplicably took the chorus of his greatest track, “Billie Jean,” and turned it into: “We’re the Pepsi Generation”; 1985’s “We Are the World,” in which his ego consumed all the suffering people of the world, reducing them to anonymous benefactors of his wondrous generosity; and 1993’s child-molestation case, which marred his reputation forever, and turned him into the bitter, self-pitying martyr he’d long threatened to become.

I would cast my vote, however, for one of Jackson’s most beloved, iconic moments: his John Landis-directed “Thriller” video. This inane, horror-movie pastiche marked the moment when Jackson succumbed to the hype, became convinced of his own genius, and decided that he needed to prove it by topping himself with longer, more elaborate productions. The man who viewed himself as the King of Pop did not understand that grandiosity and good pop are natural enemies. From this point on, we suffered through grating indulgences like the repetitive a cappella chanting at the end of the “Bad” video, or the endless, crotch-grabbing, windshield-shattering coda of the “Black or White” clip. For a while, we cringed our way through it, and convinced ourselves that such drivel was the price you had to pay for being a Jackson fan.

It’s telling that E.T. and Thriller were released the same year. One was the ultimate popcorn movie and the other was the ultimate popcorn album. Like E.T., Thriller was slick, flashy, and light on its feet. From then on, Jackson kept the slickness and flash, but became buried under the weight of his own pretensions. If his last video was 13 minutes and cost a million bucks, the new one had to be 15 minutes and cost $2 million. If Eddie Murphy and Magic Johnson were in the last one, he needed Michael Jordan for the new one.

All these years later, the simple, low-budget videos for “Don’t Stop ’Til You Get Enough” and “Rock With You” remain a joy to watch, while the lavish clips for “Scream” or “Earth Song” are about as fun as a court summons.

So, rather than dwell on those downers, I’ll remember the time before MJ guarded his talent to death, when he was willing to toss off a few moments of brilliance for Joe “King” Carrasco, without regard to how it would impact his legacy, just because it sounded like a good time.