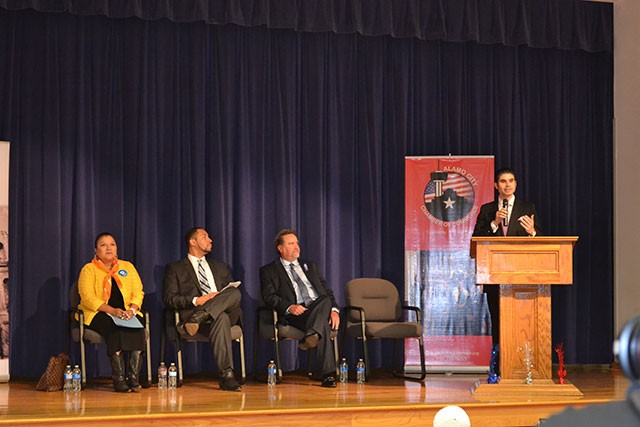 The seat vacated by County Commissioner Tommy Adkisson, wide open after the longtime public servant exited to (unsuccessfully) oust incumbent challenger Judge Nelson Wolff, is crowded with competition, even after the first round of elections. While the March primaries whittled down the choices for a new Precinct 4 commissioner, no one candidate garnered enough votes to coast into victory, leaving runoff voters two options on both the Democratic and Republican side—and, based on a recent debate featuring nearly all contenders, a fight no candidate is ready to lose.

Guerrero, a San Antonio Independent School District board member and vice president of governmental affairs for a housing development group, touted her public service experience and “tremendous amount” of private sector experience, during the final pre-runoff debate between candidates, held at Legacy Middle School last week. Hoping to fill the void, she pointed to the lack of female representation on the Court, saying a woman hasn’t served since 2001 and a Latina has yet to serve.

Among Guerrero’s top priorities if elected: spur economic development in partnership with private entities, focus on air and water quality issues and sift through the University Health System budget to ensure healthcare is distributed fairly.

“We need to make sure our healthcare system covers everyone equitably,” she said.

Calvert, billing himself as a “unifying force” in the community, said he would offer a homegrown perspective. “I’m able to understand and be a homeboy for every corner of the precinct because I literally grew up in every corner of the precinct.” If elected, Calvert, like Guerrero, would also make history, as the first African-American commissioner to sit on the court.

The public relations firm president and community radio manager said he was compelled to run as a response to women and minority business owners being left out of City and County contracts, “I want to assure contracts with the county are open to all in the business community, so that your merits and talents aren’t crowded out by big campaign contributions.”

His priority will be to stimulate the local workforce via county jobs.

“I’d like to pass a policy that says in Bexar County when we build streets, parks, drainage and infrastructure, that we actually hire people from the neighborhood … that has been one of the greatest poverty alleviators in terms of getting people on welfare back into the workforce,” said Calvert.

Both Guerrero and Calvert advocate for growth on the East Side; Calvert said he’ll focus on bringing the middle class back to the area through housing revitalization and support grants, streamlined through the federal Promise Zone designation, while Guerrero hopes to craft performance standards for economic development programs.

During the relatively calm debate, moderators noticeably refrained from treading into Guerrero’s speckled past, such as allegations she cozied up with architecture firm Muñoz and Company (formerly Kell Muñoz) while the group was contracting with the City. (Following her tenure on council, Guerrero served as a lobbyist for the firm.)

On the Republican side, the GOP runoff sees two mayors—Timothy Wilson of Kirby and Alan Baxter of Windcrest.

Even though Wilson didn’t attend the debate, that didn’t stop Baxter from taking a few swipes at his challenger, who he sees as a faux-Republican. For instance, citing the Current’s profile of Wilson, Baxter criticized his opponent for his apathy toward a college education. Wilson, a CPS Energy sub-station electrician and native of Kirby, supports non-traditional learning and is open about forgoing a college degree. (Calls to Wilson were not returned.)

A businessman himself, Baxter lauded the fact he had yet to distribute any business tax incentives as mayor and conveyed an anti-government tone popular with Tea Partiers. When asked how, as commissioner, he would entice businesses to Bexar County, he said, “Government doesn’t create jobs, government creates the environment to create jobs … I believe the only way you’re going to attract those businesses is by having great police, great streets and infrastructure. If you don’t have those, businesses aren’t going to come.”

Precinct 4 encompasses a population of 351,551, seven school districts and 11 municipalities aside from San Antonio.

All runoff winners will go head-to-head in November.