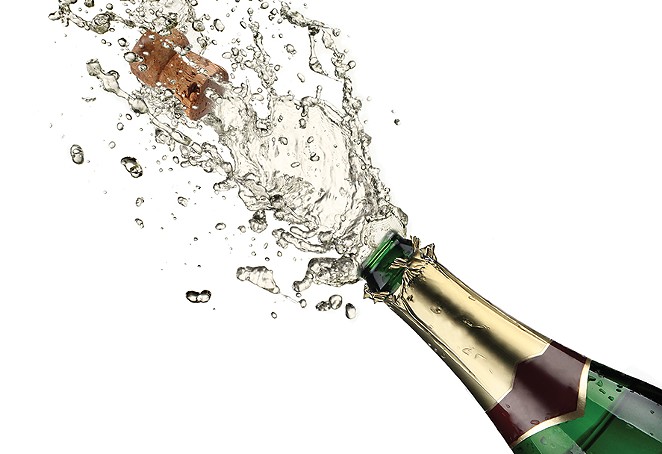 Big-C Champagne, the kind actually made in France’s Champagne region, is finally breaking out of its Big- Celebration straitjacket. No longer just for anniversaries and locker-room dousings, the stuff is at last being recognized for its everyday versatility.
But it’s usually too expensive for knocking back daily. So what follows is a list of fizzy wines for which popping the cork doesn’t mean breaking the bank. They are listed, more-or-less, in order of ascending spritziness. Well-known Champagne alternatives such as Spanish cava and Italian prosecco aren’t included because, well, we assume you already know about them.

Vinho Verde is frankly fun. The lightly fizzy white is produced in northern Portugal from grapes we don’t need to know about. The name refers more to being young than actual greenness, and the flavors are usually lemony with some light floral qualities. Though the spritz was historically a natural phenomenon, these days it’s generally the result of light carbonation. This yields a sluggable, low-alcohol wine, often to be found for under $10, that goes well with almost anything but barbecue — but who are we to stop you if that’s your pleasure. Some labels to look for are the widely distributed Casal Garcia and Broadbent, but at these prices, you can afford to experiment.

Txakoli, sometimes seen as Txakolina, comes from Spain’s Basque country where it’s enthusiastically served with everything from seafood to skewered meats. Unlike vinho verde, the wine is lightly but naturally carbonated, and on its home turf that carbonation is emphasized by pouring the wine from high above the glass with theatrical flourish. There’s a little more minerality in Txakoli than the vinho verde, and perhaps a touch of salinity, too, and this additional complexity (plus the fact that less of it is available) accounts for a slightly higher price point that hovers around $20 — still way less than Champagne and with a much higher cool factor. Seek out Txomin Etxaniz Getariako Txakolina or Ulacia Getariako Txakolina. You can avoid embarrassment by writing the names on a piece of paper, though it’s doubtful that most wine merchants can do much better with pronunciation than you could.

Italian low-pressure sparklers are normally called “frizzante,” and a good example is the lightly sweet Moscato d’Asti from northern Italy around Turin. The wine is really low alcohol, (around 5-6 percent), fruity-floral (think peach and apricot) and perfect as an aperitif, with not-too-sweet desserts, and with many Asian dishes, especially those with a little chile heat. If the producer steps up the atmospheric pressure (more pressure in the bottle equals more-active bubbles) the result in Italian terms is a “spumante” — and this gives us Asti spumante, a wine that’s usually a little drier, higher in alcohol and equally flexible in the pairing department. Good examples of both are available for under $20. Names to check out are Michele Chiarlo for the Moscato, Martini & Rossi and Zonin for the Asti.

Italy makes some gorgeous Champagne-like wines in the Franciacorta region, but they also approach Champagne prices, so we’re moving on to a fizzy red: Lambrusco, the name of both a grape and a region. Yes, it got a bad rap decades ago, but it’s coming back like a reformed politician. Brimming with bright acidity, fresh with flavors and aromas of sometimes-bitter cherry, this softly sparkling wine is low-alcohol, comes in styles from lightly sweet to secco, or dry, and is a champ when it comes to flexibility: cured meats, pastas, pizzas … it all works. I just made short work of a bottle of Mionetto Il Lambrusco, brimming with berry flavors.

Sparkling wines, you may have guessed by now, are made in just about every wine-producing country. In Germany and Austria, they’re called Sekt. Closer in composition to the wines of Champagne are South Africa’s Cap Classique bubblies. Using classic French methods and traditional grapes such as chardonnay and pinot noir, these wines weigh in at much lower prices yet retain Champagne’s yeastiness coupled to green apple and citrus. The Graham Beck Brut, for example, can be found for under $19 and tastes like much more.

Back in the U.S., there are plenty of decent sparklers to be had from California. But for everyday value, look to New Mexico’s Gruet and wines from Washington state, such as Michelle, a non-vintage brut and brut rosé from Domaine Ste. Michelle. And, as a final zinger, this: Many critics have grudgingly admitted to finding the Barefoot line of “Champagnes” (it’s a grandfathered use of the term) more than tolerable — especially the Barefoot Bubbly Extra Dry. You should be able to find it for less than $10. Please promise to forswear any in the lineup with moscato on the label, however. Life’s too short to drink really nasty cheap shit.