San Antonio's own Ernest Gonzales turned us onto Butcher Bear and Charlie a couple weeks ago. Their album, which drops November 19, gives a good introduction to the duo's sexy electro-sound, but to understand why they're the new hot shit on Austin's indie dance scene, you've gotta see them in person. Butcher, AKA Ben Webster, AKA dude in a Big Red Bear costume, spins glitchy big beats. Meanwhile, Charlie, AKA Maricela Mayo, AKA smokin' hot lady in hosiery, delivers sultry vocals.

Just in case a giant bear and a sexpot weren't visual stimulation enough, Butcher Bear and Charlie brought their pals, interpretive dance troupe Little Stolen Moments, onstage toward the end of their set to deliver a stone-faced choreographed act.

For all Butcher Bear and Charlie's showmanship, the early afternoon crowd, though large, did not seem moved to shake they asses. Maybe they were saving it up for Slick Rick and Big Freedia later in the day. Or maybe they were sufficiently unimpressed with a spotty cover of the Eurythmics' "Sweet Dreams" and disjointed communication between the lady and bear. "I'm sorry you had to see mom and dad fight," Charlie apologized into her lipstick-stained mic. Fortunately, they closed with their hottest track, "Chopstix," sticking the landing on a wobbly performance.

Initially attracted by Christopher Crisci's manly skunk-striped beard, my interest in Appleseed Cast solidified when photographer Jeff Turner told me that they were a pretty important post-rock band back in the days when I was in high school and still listening to rock-rock. Can you believe I'm a music editor? Neither can I.

Moving on, the Appleseed Cast, who have continued to release critically-acclaimed albums since their 1997 debut, specialize in dynamic, experimental guitar arrangements. Over the years, it seems the group has moved from their proto-emo comfort zone (think Braid) and into a more difficult arena that challenges the audience with wordless soundscapes that dissolve into discordant jams.

The clincher is the lovely, hazy melodies that emerge, making all that impressive noodling worth it.

I am in awe that the Antlers' epic, lush chamber pop is produced live by just three fucking people. Perhaps it's a little less shocking when you consider that prior to recruiting the excellent Michael Lerner on drums and equally-fantastic Darby Cicci on everything but guitar and drums, Peter Silberman recorded it all in his Brooklyn bedroom by himself.

The group opened with the ominous "Kettering" off the Antlers' thus-far magnum opus Hospice. Cathartic waves of sound washed over the crowd, punctuated by Silberman's occasional vocal trills. Though the trio are together to play Silberman's brain-child, you would never guess it from their tight-knit, transportive textures, thanks to synthesizer, looped vocals, and restrained percussion. It was all the more impressive when I looked up toward the end of the set and noticed Silberman's E string hanging off his guitar, shimmering in the sunlight.

One never knows what one will get at an Ariel Pink show. The enigmatic has only slightly come around to live performance on demand, given that much of his initial musical output was just him recording more than 500 songs in his home. This time around, it seemed like we got some willful yacht rock tendencies via saxophone and Pink himself, wearing a fetching floral off-the-shoulder blouse and silver sparkly belt. Then sonic style swung wildly, which is par for the course for the prolific Pink. One minute we're listening to a cartoon soundtrack, the next chilling out to a Jam-influenced song. And then, just like that, Pink decides he's done and everyone walks off the stage.

This is the closest thing to a jam band Fun Fun Fun Fest had this year, and I love the festival for it. The '60s psychedelic rockers, whose influence went far, far further than their Brazilian roots, saw the American hippies and British mods and raised them about 1,000, suffering mentally and politically for it.

Several decades later, only Sergio Dias remains in the group, but he leads the seven-piece outfit like an enlightened being. Wearing a groovy caftan and a beatific smile, Dias blissfully shredded his guitar, only in place of the agonized, emotional facial expressions we expect from performing rock gods, Dias sported only a Cheshire Cat grin.

As a matter of fact, the entire group tends to smile and give each other the thumb's up during the performance, as if each song played is the best version ever. While Dias has the chops to match any shredder on the punk rock Black stage, Os Mutantes' sound is still pure tropicalia-flecked psych-rock, with a dash of theatricality.

Not to pull her diva card, but Big Freedia's presence was known far before she climbed the blue stage Saturday night. Decked out in red jeans and black cowboy boots, the brickhouse and her entourage strutted over to the media tent in the mid-afternoon to conduct a round of interviews. Just one problem, they were early. Freedia and crew calmly waited out the MIA journalists (probably trying to score free food somewhere).

By the time Freedia, her back-up dancers, her protective and puffy handler, and her DJ Rusty Lazer were ready to perform, she was back in command of her own bounce hip-hop genre.

"This next song is self-explanatory," Freedia drawled before launching into "Azz Everywhere." As promised, her many dancers and a mob of volunteers from the crowd packed the stage to do the dance the New York Times magazine genteely calls "p-poppin'" Thankfully, we're not NYT, so we can tell you what really happened: a fuckload of pussy-poppin,' azz-shakin' madness. As Freedia rapped, her "shake team" helpfully showed eager but flaccid Austinites how it's done. In its easiest form, you turn your back to whoever you want to impress the most, bend over, and jiggle your butt. Forget that tight-ass crap, here, you want to flaunt your jelly, as shake-teamers did in skin-tight lycra and booty shorts.

Traditionally, this is a ladies' (of all genders) choice, and men are verboten. But as Freedia's star has grown, so have the number of determined yet non-offensive young white males onstage. They are the worst of the booty-shakers, not to mention pussy poppers.

Freedia's role is less of a rapper and more like a coach, or as the hype-(wo)man for New Orleans bounce itself. Though she's an able freestyler, most of her time Freedia instructed her dancers to "shake that asshole," and "†ake it around the world," like a coach at football practice. And the results are fantastic. Who knew that sexuality could still exist devoid of the seduction agenda? Because, these people shaking it, they are not shaking it for you, they're not even shaking it for Big Freedia, they're just shaking it for themselves, and it turns out that feels pretty damned good. 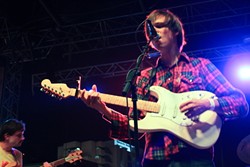 Although he's the reason Dirty Projectors played, Dave Longstreth himself failed to impress during his group's evening set. His voice seemed weak and his guitar playing distracted, but thankfully, his arrangements are so beguiling they can carry his pieces even when he himself cannot.

In a set heavy on the Bitte Orca material, it was vocalist and guitarist Amber Coffman who saved the day. Her freakishly high notes, coupled with the stunning choral-inspired arrangements with Angel Deradoorian and Haley Dekle, kept the audience glued to their spots instead of decamping for, oh, GWAR. In fact, even Longstreth seemed to want to be watching the 9-foot tall formerly-frozen aliens, and he said as much to the audience.

While Dirty Projectors were experimenting with how loud their delicate sound could go, across the park GWAR were attempting their campy horror show on a crowded-looking stage devoid of the usual over-the-top mise en scene.

Despite the "stripped down" nature of their festival performance, the 25 year old shock metal band still managed to fit a blood-spewing contraption, their whipping boy/best friend Bonesnapper, and a walking toilet with tits all onstage. The giant red-and-green splattered crowd seemed not to mind that the costumed giants went over several minutes, but members of Bad Religion were seen huffily tapping their wristwatches from the adjoining stage. Come on GWAR, don't you know Greg Graffin has to be back at the La Quinta in time for the SNL monologue?