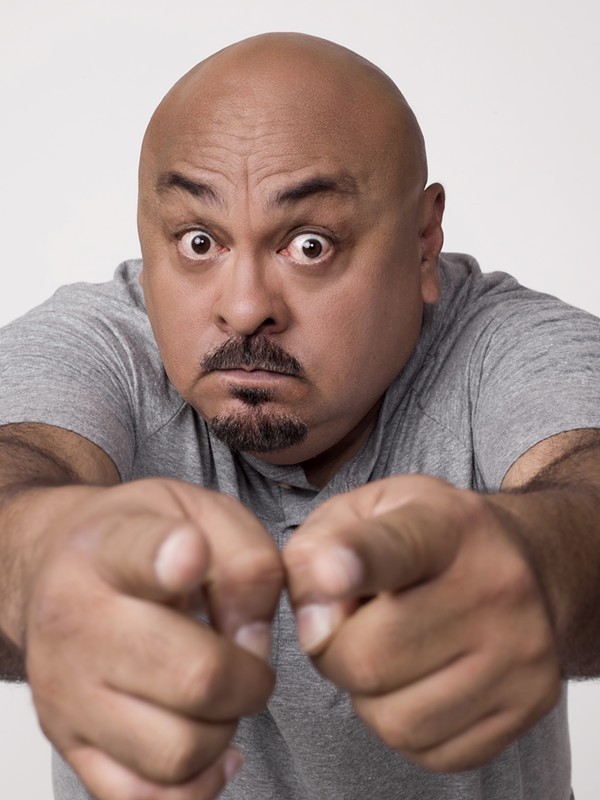 If jokes about the reproductive capabilities of Mexican women or the number of day laborers it takes to change a lightbulb is your idea of humor in 2020, chances are the inaugural Ha Comedy Festival, February 21-23, won’t be your cup of manzanilla.

The three-day event is an extension and rebranding of the popular Latino Laugh Festival that called San Antonio home from 1996 to 1999 before moving to Los Angeles for one final year. Twenty years later, Jeff Valdez, founder of the original festival and the cable channel SíTV (now NuvoTV), decided to team up with a few co-producers to revive the fest, which gave a platform to comedians including Cheech Marin, George Lopez and a then-unknown Gabriel “Fluffy” Iglesias.

Although the Ha Comedy Festival doesn’t include the term “Latino” in its name, it is following in its predecessor’s footsteps as a showcase exclusively for Latino comics.

“We’re very proud of being Latino, but we decided we didn’t need to call it Latino,” Valdez said. “We didn’t need to say, ‘These are funny Latino comics.’ They’re just funny comics.”

More importantly, they’re funny comics who aren’t going to use their Latino background as a crutch that allows them to perform lazy jokes. Sure, there are plenty of stand-ups who still think building a set around la migra and cholo jokes is hilarious, but Valdez isn’t interested in promoting negative stereotypes.

“The new generation of comics is focused more on life experiences than they are on race,” he said. “So, we’re going to stay away from chancla jokes and gangbanger jokes and border jokes and focus on stuff that is more universally relatable.”

To ensure this happens, Valdez and his team have vetted the comedians and curated their sets to fit the festival’s mission. That process includes urging comedians to avoid material that’s too political.

“I don’t know that anybody mentions [Donald] Trump one time in their act,” Valdez said. “What this won’t be is a Trump-bashing comedy festival. This is not about that. This is about celebrating our lives and our community and our humor.”

Austin-based comedian Travis J. Reyes, who isn’t part of the festival, says he understands the “quality control” aspect of Valdez’s plan. However, he doesn’t think it’s responsible to stop comedians from performing well written and thought-provoking jokes about the current U.S. administration.

“Telling comics not to be critical of people in power isn’t good for comedy,” said Reyes, a San Antonio native. “Comedy should be about punching up, not down. I get not wanting ‘Commander-in-Cheeto’ jokes, but legit critiques of [Trump] shouldn’t be discouraged.”

San Antonio comedian Larry Garza said he “has a lot of respect” for the festival’s perspective and hopes those who want to participate next year will be able to identify the fine line between jokes that stereotype and those that authentically address Latino culture and life.

Along with a series of stand-up and sketch comedy shows during the week, the event will also feature the film premiere of the new zombie comedy Witness Infection starring Robert Belushi, son of actor and comedian Jim Belushi and a star of TV’s How I Met Your Mother. Also on tap is a one-man performance of the Broadway show Prinze by José Sonera, which celebrates the life of late comedian Freddie Prinze.

“If there is an area where Latinos are woefully lacking, it’s in the world of comedy,” Valdez said. “Latino audiences will show up, but they want quality. You can’t spend $1.95 and expect them to say, ‘Oh, you did that for me?’”