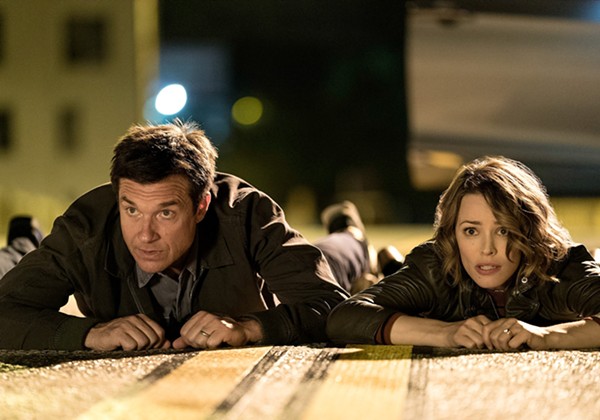 What happens when a seemingly normal evening goes awry? It’s a trite comedy formula that has lived through plenty of cinematic reiterations over recent years, many of which center around an adult-orientated party, the heavy consumption of hard liquor and a lot of poor decision making. When all is said and done, movie characters usually end up doing something stupid like accidentally killing a prostitute or stealing a tiger from Mike Tyson.

The so-so 2010 comedy Date Night starring Steve Carell and Tina Fey attempted to put more of a nerdy, everyday spin on the subgenre and ask what would happen if an ordinary, middle-aged married couple went for a night out together and got caught up in some seedy activities. The new Game Night aligns more with this pair of square characters than it does with those looking to snort coke off strippers. Game Night, however, takes the idea of average couples doing average things and runs with it. With broad strokes of self-awareness, a screwy screenplay that sometimes crosses the line into parody, and one specific supporting character that steals the entire movie, Game Night is more gratifying than hearing an opponent say, “You sunk my battleship!”

In Game Night, Oscar nominee Rachel McAdams (Spotlight) and Jason Bateman (Bad Words) star as Annie and Max, a married couple that share a love for competitive games. The two meet-cute when they simultaneously answer a random question about Teletubbies during a trivia event at a bar. Although their lives are more fun than a barrel of monkeys, Annie and Max are having trouble conceiving a child. Max’s stress-related fertility problems are stemming from the issues he has with his hotshot brother Brooks (Kyle Chandler). The only way to overcome his shortcomings is to confront him head on.

Luckily, with Brooks back in town, he can join the regular rotation in Annie and Max’s weekly game night where some of their friends come over to partake in games like charades and Pictionary. Little do Annie and Max know that Brooks has planned a special surprise for them during one of their game nights when he hires a local entertainment company to pull off a simulated murder mystery, so everyone can search for clues and play along. When Brooks, however, is actually kidnapped by masked men who break into his house during the game, Annie and Max think the incident is all part of the elaborate contest until they finally realize it’s not. With a pair of armed criminals making demands, the friends find themselves wishing their lame night ended with some warm wine and Yahtzee instead.

Although they failed in their attempt to reboot the Chevy Chase vehicle Vacation in 2015 with Ed Helms in the lead role, don’t hold it against directors John Francis Daley and Jonathan Goldstein for too much longer. The filmmaking duo, who also wrote both Horrible Bosses movies, turn a real corner with this dark comedy partnership that feels edgy without going into places that are out of sync with the tone. Yes, Game Night is rated R, but it really isn’t a full-throated hard-R like some might imagine. Instead, the film leaves room for some heart and internal exploration, although it might be difficult to think too deeply with all the well-earned laughter, especially in the film’s first half.

Although it’s McAdams and Bateman leading their cast of misfits through the story, a major secondary player in the game is actor Jesse Plemons (Observe and Report, The Master). Plemons plays Gary, the couple’s creepy police officer neighbor who once attended game nights with his wife at Annie and Max’s house before their divorce, a fact that doesn’t deter him from making things awkward by asking when the next game night is and ultimately forcing Annie and Max to avoid contact with him. Make no mistake; as a character, Gary’s got the goods and Plemons delivers a perfect comedic performance in only a few short scenes. In a dry, dour and unsettling kind of way, he’s that impressive.

All in all, the raucous comedy is more enjoyable than, well, a traditional game night. With sharp jokes and queasy-worthy violence, some nicely timed movie and celebrity references, and a lively electronic score by Cliff Martinez (Contagion, Drive), Game Night scores.