In her two-episode turn as Lyanna Stark on Game of Thrones, it could be argued that Irish-Italian actress Aisling Franciosi’s role was both an integral and non-integral part of the award-winning HBO series. Without her, the narrative that captivated audiences for eight full seasons would’ve ceased to exist. She gave birth to Jon Snow, for Christ’s sake. Still, her actual contribution to the show as an actress was ancillary at best.

In her new film The Nightingale, there’s no doubting the immense impact Franciosi brings to the daunting role and to the disturbing story, which is set in early 19th century Australia. Written and directed by Jennifer Kent (The Babadook), Franciosi plays Clare Carroll, an Irishwoman seeking revenge against a British lieutenant (Sam Claflin) and the soldiers who raped her and killed her family. With help from an Aboriginal tracker, Clare ventures out into the deadly Australian wilderness to find the men and claim her pound of flesh.

During an interview with the Current last week, Franciosi talked about what drew her to the role, why the film is different from most revenge flicks and why she doesn’t feel like she has to defend the movie from detractors who are condemning it without seeing it.

The Nightingale is currently playing exclusively at the Santikos Bijou Cinema Bistro.

What motivated you to want to take on the lead role of a film that is as dark and controversial as The Nightingale?

Jennifer [Kent’s] writing really struck a chord with me when I read the script. There is just something about the way she writes that is very authentic and truthful. It really resonated with me. The story is a very powerful one with a lot of big themes that I think she deals with intelligently. Also, from an actor’s point of view, I just thought, “Wow. This is a once-in-a-lifetime role.” In my career, I’ve played a lot of teenagers, which is great, but I really wanted to step up to the plate and prove that I could do more.

Most young actresses like yourself don’t get a chance to show their range in such a powerful, serious film. Honestly, it’s really amazing that you got to do that in a project like this so early in your film career and not in something like Halloween 12.

(Laughs) Honestly, I was lucky that this script came along. I did work my ass off to get it. I also wrote to Jen and told her that I would give her everything and that she could push me to the absolute limit if she gave me the role. But I can’t lie. I know that I’m lucky. I’m realizing more and more that these roles come maybe once or twice in a career. To have gotten one so early on feels like a real blessing, but also makes me realize I can’t compare every script to this one.

This story is set during a very particular time and location in history. Did you study what was happening in Australia during the early 19th century to get a better sense of what these characters were going through?

I did a lot of research. Between getting cast and filming, there were about nine months, so I used that time to devour every documentary and book I could find. I educated myself on the history of Australia and the Aboriginal history. I studied post-traumatic stress disorder (PTSD) and violence against women and sexual violence in general.

The physical nature of your role must’ve taken a toll on you. What was the actual shoot like, especially since most of it is outdoors?

We were filming in pretty inhospitable locations. I knew it would be a grueling shoot. I think the shoot was for 54 days and I was in 52 of those. I was working 14-16 hours a day. A lot of prep went into it, but that’s a luxury that you don’t get on a lot of projects. I auditioned more than three years ago, so the wait seemed endless. It was torture.

Revenge films aren’t anything new, but why do you think this one feels different? The rage your character shows and the change she goes through during the film felt more urgent than most revenge films I’ve seen in the past.

I think one way it’s different is that you don’t get the payoff that you’re quite expecting. The film really looks at the cost of revenge. Things don’t get wrapped up neatly with a bow as they do frequently with films. Clare is going on a quest for revenge, but I, personally, don’t see it as a “rape-revenge” movie. She’s going after [the man] who stole everything from her. She had been enduring his abuse for a long, long time because she wanted to protect her family. When she goes for revenge, he has not only taken her sense of self and her body, but also her child and her husband and her future and her dreams.

What was your relationship like with Sam Claflin (the British lieutenant) when the cameras weren’t rolling? Did you try to steer clear of him to keep that intensity high on the set or was it a real working collaboration?

Sam and I had a discussion early on about whether we should hang out before and after the shoot. We thought it was an interesting idea if we kept some distance. But as soon as we started workshopping, we realized we had to do the opposite. I had to get as close to him as possible. It was important for us to feel like we were safe with one another. When you’re shooting the kinds of scenes you have to shoot together, personally, I can’t put myself in an emotionally fragile place to get an authentic performance without trusting the other actors completely. So, we really got to know each other very well. We got really close as a group. I was sobbing in between takes and they would comfort me and just hold me. Everyone was just so sensitive to what was going on and what we were trying to do with the performances. 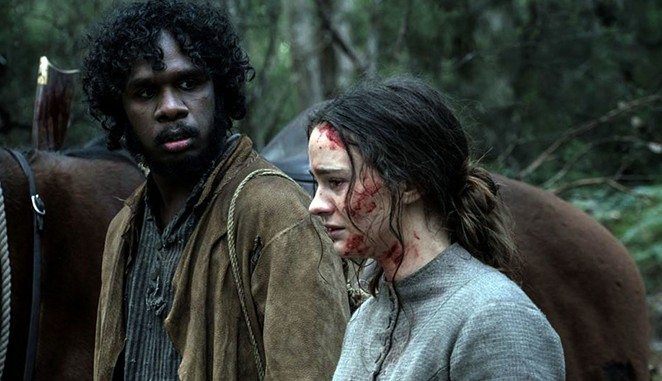 I’m sure you know there will be people who dismiss the film without seeing it simply because of the violent aspects of it. As you talk about this film, do you feel like you have to defend it or would you rather it speak for itself?

I don’t feel I have to defend it, no. I think the nice thing about giving yourself wholeheartedly to a project is that we know that we did it for honest and honorable reasons. The reality is that these are realities of colonialism and war. We see it going on even today. You can’t tell an honest story and depict a time in history without showing the violence. If you’re going to do that, you need to show just how terrible it is. I’m really proud of how we’ve shown it because we really focus on not dehumanizing the victims. In our film, it’s really about looking at the human being and the emotional cost of violence. We’ve become so desensitized to violence and what it actually means to inflict pain on another human being. So, I absolutely stand by every frame of this film. I think it makes people angry because it makes people feel things they don’t want to feel. But I think art has a place in making us look at society and at ourselves.