It's a stereotype video game enthusiasts have been trying to quash for decades — the image of an unemployed, single, 35-year-old slob sitting in his parents' basement, wearing a Doritos-stained Atari shirt and headset, virtually killing aliens or zombies or terrorists with his Xbox controller in hand and yelling upstairs at his mom to ask when dinner will be ready.

Truth be told, 42 percent of the U.S. population plays video games regularly (at least three hours per week) and chances are not all of them like Doritos. According to statistics released by the Entertainment Software Association, these 155 million Americans pay into a gaming industry that racked up $22.4 billion in 2014.

Finding a comfortable nook in this ever-growing money-making industry is Penny Arcade, a webcomic that debuted online in 1998 and has since developed into a company that includes a podcast, episodic video games, an online reality show and a charity. In 2004, Penny Arcade founders Jerry Holkins and Mike Krahulik launched a series of gaming conventions known as PAX (Penny Arcade Expo). Since the inaugural event took place in Bellevue, Washington, PAX has splintered into five different annual expos (PAX Prime and PAX Dev in Seattle, PAX East in Boston, PAX Aus in Melbourne and its newest, PAX South in San Antonio).

PAX South debuted in January 2015 and, according to IGN, a games and entertainment media company, broke the attendance record for a first-year PAX convention. A spokesperson for PAX South told the San Antonio Current that although they "don't release specific numbers" on turnout, attendees last year were "well into the tens of thousands."

PAX South 2016 will take place in San Antonio from January 29-31 at the Henry B. Gonzalez Convention Center. The expo caters to all types of gamers, from those who enjoy MMORPGs (Massively Multiplayer Online Role-Playing Games) to sports-themed games to vintage throwbacks and everything in between. PAX South will also feature video game panels, tournaments, concerts, a game industry expo hall for video game producers and retail companies, autograph sessions, cosplay and meet-up areas where gamers interested in specific platforms like handheld games, PC games and board/card games can convene.

Robert Khoo, 35, president of Penny Arcade, told the Current that before last year's inaugural PAX South expo, he had travelled around the U.S. for five years looking for a city that could host a fifth expo. It wasn't until one of their partners suggested San Antonio on a whim that he made a trip to see what the city had to offer.

"We knew fans wanted a PAX in the central corridor," Khoo said. "I was ecstatic knowing I had found our city but upset that I had wasted five years looking in all the wrong places. The tricky part was finding a city that had the right vibe. The hospitality and welcoming culture of San Antonio made it a super easy decision. To be able to facilitate something that not only celebrates games but strengthens the love and fandom of them is pretty cool."

It's the same kind of ambiance Angelus Delacroix, 36, felt when he decided to create his own independent video gaming production studio in San Antonio in 2013. A graduate of the American Academy of Art in Pittsburgh with a degree in video game art and design, Delacroix is the CEO of HEBI Studios.

He and his team will attend PAX South this year, along with a number of other gaming conventions around the U.S., to spread the word about their new family-friendly video game RageBall (he refers to it as "Pong on steroids"), which is scheduled to launch for the Nintendo Wii U this fall. Another indie game in HEBI's catalog is Oop Boy, a 2D, side-scroller puzzle game featuring a "piece of poo" (imagine Super Meat Boy after a long trip through the entire gastrointestinal tract) that has been flushed down the toilet and must now survive the perils of the sewer.

Delacroix sees San Antonio as a great place for a convention like PAX South and for a young company like his to reach an underserved gaming community.

"We're excited about PAX South because we actually get to show off our product and let more people know about [HEBI Studios]," Delacroix said. "San Antonio gamers seem to like a little bit of everything. You have people who like retro games like Pac-Man and Donkey Kong and then you have younger gamers that like things like Call of Duty and Grand Theft Auto. We're hoping RageBall is something everyone will have fun playing."

For local gamer Jonathan Carrizales, 24, who works tech support for Time Warner Cable, PAX South will be an opportunity to experience an expo exclusively for gaming that won't break the bank since there is no travel involved. He hopes to connect with other gamers who appreciate the same video games he does, specifically League of Legends, a multiplayer online battle arena game Carrizales has been playing for about three years.

"I grew up with video games most of my life," Carrizales said. "What makes me enjoy video games are thought-provoking situations giving you some insight about life and how you can experience that through a character and having the story influence you as a person."

Gamer Michelle McCloud, 24, an online student at Texas A&M University, will travel from Dallas to attend PAX South for the second year in a row. A fan of indie games but also of mainstream ones like The Legend of Zelda, McCloud said she considers herself a gamer because playing video games is how she spends most of her free time with friends. Even her non-video game hobbies like equestrianism were inspired by her love of games.

"My fondest gaming memory was in Ocarina of Time when you win the race with Epona [Link's steed in The Legend of Zelda series] and jump over the wall with her," McCloud said. "It blew my mind how epic it was and inspired me to start riding horses. I like the adventure and the way you can be a part of something much more exciting than real life. It's an escape from reality." 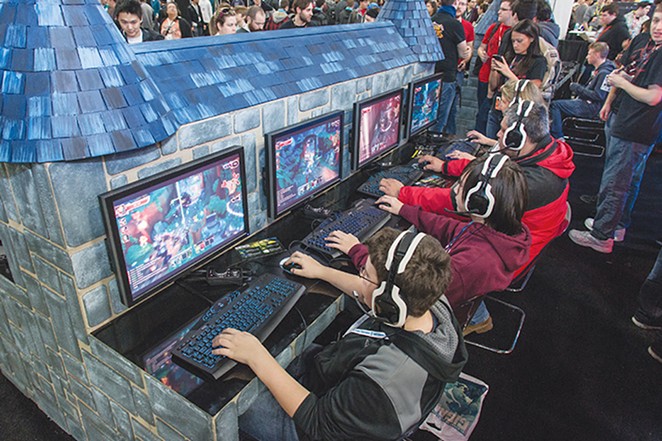 Psychologist and self-described gamer Jamie Madigan, 44, knows exactly why video games make players feel immersed in imaginary worlds. He explains it in one of the chapters of his new book, Getting Gamers: The Psychology of Video Games and Their Impact on the People who Play Them, which was published in October 2015. In the book, Madigan, who earned his doctorate in psychology from the University of Missouri in St. Louis, writes about the nostalgia factor behind retro games, why some gamers cheat and hack their way to victory, and why people are motivated to play games when they could be doing other activities. He said an expo like PAX South is a perfect way for gamers to spend time with others who share a common interest.

"It's easy to find people through the magic of the Internet, but there's no substitute to being there in person and feeling that energy," said Madigan. "It's fun to participate wholeheartedly in things like [gaming expos]. It builds a strong sense of identity and community."

For those who don't consider themselves part of the gaming community but still take it upon themselves to criticize gamers about their hobby, Madigan recommends they pick up a controller before they pass judgment.

"If they're really interested in understanding gamers and why we do what we do, the best advice is to simply play some games, preferably with gamers," he said. "What's the worst that could happen? It's not like you're going to turn into some maladapted social outcast or anything."