Game Over provides a haven for old-school gamers 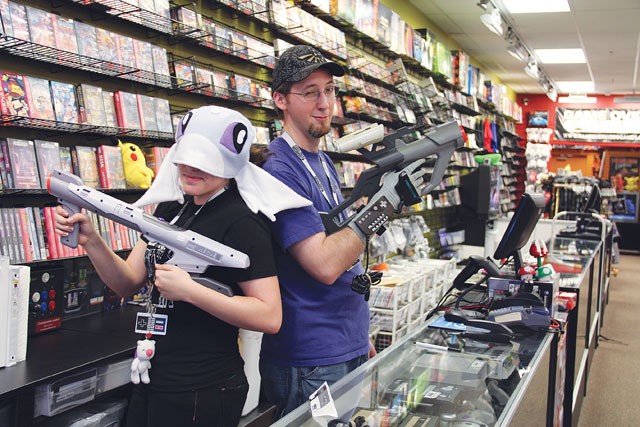 Eight-vs-eight online death matches, intuitive AI enemies that adapt to your tactics, destructible environments governed by real world physics, and deep, enriching narratives that weave complex characters into a singular goal to stop an overwhelming evil force. These are some major elements found in today’s video game industry. With companies staffed with dozens of programmers and backed by millions of dollars, it’s no surprise how huge video games have become in the past decade. But it wasn’t always so. If you stripped those elements away, what are you left with? For the workers at Game Over, you’ve got a utopia of classic video games from over 20 years ago.

Right off Highway 410, in front of the Alamo Drafthouse Park North location, Game Over is a franchise committed to the sale of games and consoles from as far back as the early ’80s. In one corner, current generation games for the PlayStation 3 and Xbox 360 line the wall just behind two aisles stacked with games for the Sega Genesis, the original Nintendo Entertainment System, and Atari 2600. Under glass, several imported games from Japan are on display, as well as over two dozen game consoles available for purchase.

“We have a blast here,” says assistant manager Mike Festger, “A lot of the time we hear people talking about how awesome they were at some games like GoldenEye or Street Fighter or others, and here they can finally prove it to their friends.”

Walking down each aisle is like an adventure through time for any gamer. But the business of selling classic video games is only part of Game Over’s philosophy. At the back of the store is their museum depicting the history and evolution of the video game industry through consoles and peripherals. Each console is tagged with a small card giving a brief history of the machine and some of its notable achievements through the years. On the other side of the room, various portable systems and accessories are showcased, like the infamous Nintendo Power Glove, Sega Game Gear, and even 1997’s Game.com — a portable game system with a touch screen.

Game Over is also dedicated to supporting local artists who are proud to show off their nerdy and fantastic creations. You can purchase ceramic figurines, stylish buttons, or pixilated portraits by local artists for an affordable price. “Our passion for gaming goes beyond just the games themselves, and we will always support and celebrate that passion in other forms. These artists do some amazing work and we’re proud to be a part of spreading it to the rest of the community,” said Festger.

While selling old consoles and classic video games is the bulk of Game Over’s business, the real crowd pleasers are the live events and tournaments the store hosts each month. From old-school throw downs on Street Fighter 2 Turbo, four-player free-for-alls on Super Smash Bros, to DDR contests and Guitar Hero duels, every month is packed with various game-related parties for everyone to partake in. This August saw Game Over’s annual Classic Game Fest 2011, in which they hosted a four-day extravaganza packed with live music, movie screenings in the parking lot, daily tournaments, and tons of prizes in gift cards and apparel. “We actually had the cops called on us because we were making too much noise,” Festger said. “When gamers get riled up, they can be louder than die-hard football fans.”

Ultimately, Game Over is not only a utopia for the video game connoisseur, but a mecca for any video game enthusiast. Maybe you need a reminder of how bad the controller of the Atari Jaguar was. This is the place. •