At a nearly sold-out show last night at the Aztec Theatre, Garbage reminded the audience why it continues to be a driving force in rock 'n’ roll.

Opening the night was Austin’s Pleasure Venom, a five-piece noise-punk outfit fronted by vocalist Audrey Campbell. The band tore into a 40-minute set that got the crowd moving to its dissonant guitar licks and heavy grooves. The sound was reminiscent of the off-kilter riffage of bands like noise rockers the Chinese Stars mixed with the femme-forward power of bands like Bikini Kill.

After the debris settled from Pleasure Venom’s rambunctious set, Garbage stepped onto the stage and dove right into “Control” from 2012’s Not Your Kind of People. The audience erupted into applause as frontman Shirley Manson sauntered across the stage singing while making dramatic gestures.

After donning a flowing black dress with elongated lace arms, Manson and family then spun into “Stupid Girl” a fan favorite and hit from the band's 1995 eponymously-named debut album.

And while seeing Butch Vig (who produced Nirvana’s Nevermind record) on drums was pretty cool to watch, Manson’s command of the stage and audience made it clear why she holds Garbage's reins.

After performing “Wicked Ways,” which turned into Depeche Mode’s “Personal Jesus,” Manson talked to the crowd:

“I love you, San Antonio! I’m sleep-deprived but I’m glad to be in this beautiful theatre. Go Spurs!”

The audience cheered as she continued.

“We’re glad to be on the road with Pleasure Venom, thank you for coming here early to watch them open," Manson said. "We invite people we think have got a voice and have a unique way of looking at the world and have got something to say and who want to push against the pricks. So here we have this fantastic band who are absolutely breaking conventions in every single way. I am in awe, and we’re so grateful to have them here tonight.” 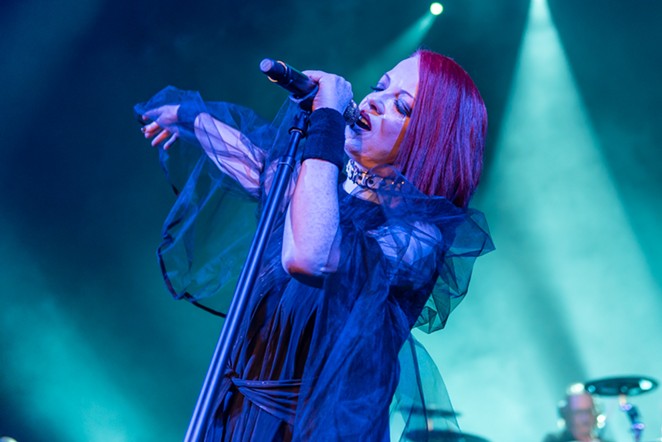 Overall the show was incredible and a perfect demonstration how a vocalist can drive a band and command an audience. Manson did just that with a perfect balance of attitude and poise.