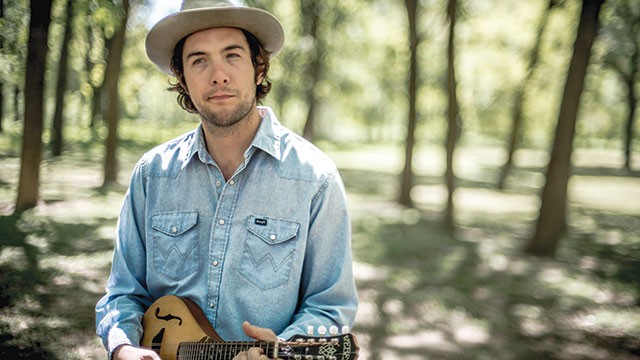 “Yeah, I’m all over the place,” says Garrett T. Capps, but I’m not sure which one is talking.

Is it the rocker who came out of nowhere with the explosive Radical Sabbatical in 2012? The country/folk singer from another era that surprised again in 2013? The one-man orchestra who plays guitar with his hands and drums with his feet?

“I like heavy riffs, fuzz, thick [and] heavy sounds, not necessarily thrash, just big, catchy grooves,” says the man who worships both the Foo Fighters self-titled 1995 debut and The Wallflowers’ T Bone Burnett-produced Bringing Down the Horse (1996), and who recently discovered his country roots.

Capps is about to present yet another, unprecedented side of himself: that of the frontman. So meet Garrett T. Capps—all three of them.

The three-song Radical Sabbatical was a revelation, a real kick in the guts. One of the best EPs of 2012, Radical was a one-man show of power riffs and in-your-face aggression, but that was only the beginning.

“That was more like a test run,” said Capps. “I’d never gone in the studio and played everything like that, and I’d never released a CD with my name on it. I needed to do it and I achieved what I wanted to do. The sound is there, but it was a low budget thing and I didn’t get to spend much time on it. I felt it was just there enough where I was comfortable putting it out; I didn’t want to wait any longer. There were plenty of mistakes and things I don’t like about that recording, but I realized I could do it well enough so I wouldn’t totally hate myself for it.”

Even though Capps released another solid rock-based three-song EP in 2012 (The Only Hipster), 2013 would bring a radical change: Hope & Doubt & Freeway Birds, a first foray into alternative country and folk that couldn’t be more different to Radical Sabbatical.

“I didn’t even know I liked country,” Capps said. “I didn’t necessarily like the music of, say, Cory Morrow, but I liked the atmosphere at this type of shows. I grew up on summer camps in the Hill Country, so it seemed to make sense.”

Of the album he recorded with Jonny Burke (plucking on “Makin’ It Happen”), multi-instrumentalist Scott Davis and Don Cento on bass, “I didn’t want to record Americana music unless I could make it sound like a professional recording, and it turned out great,” he said. “Those five songs we did in 10 hours. For acoustic music, that’s how I want to do it and that’s how I want it to sound. Rock ’n’ roll can be a little more … dirty.”

For the first time, Capps will be fronting his own band at Sam’s on Monday: The Only Hipsters, featuring Phil Luna (Fear Snakeface) on drums, Odie (Buttercup, Mitch Webb & the Swindles) on bass and Scott Lutz (Snowbyrd, Hickoids) on guitar and lap steel.

“Basically, we’ll be playing some versions of [Hope & Doubt & Freeway Birds] in electrified form, Neil Young-style, some rock ’n’ roll stuff. [We’ll] see where it goes,” said Capps. “They’re very excited to play with me, but more so to be playing with each other, ’cause they’re all friends.”

A one-project-at-a-time guy, Capps says his immediate goal is to nail down the arrangements, do the show and see what happens.

“I don’t know if we’ll record together, but I know we’ll play more shows. This is the starting point. It’s going to be a show, a fun night.”