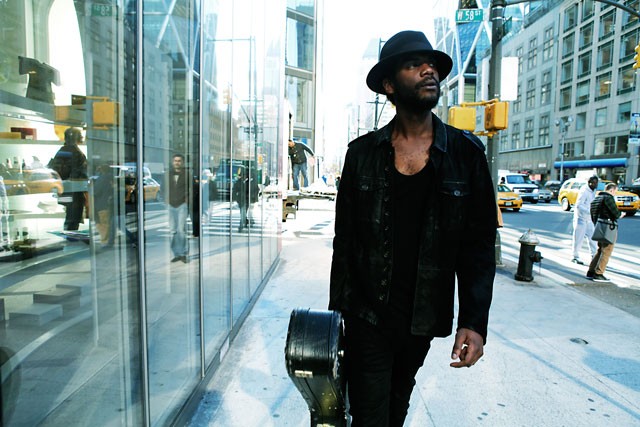 Just like when he's on the stage, 28-year-old Gary Clark Jr. doesn’t talk much on the phone. It's as if he’d rather be playing or writing songs, almost as if embarrassed to talk about himself. He’s courteous and sweet, but everything he tells me sounds like a “Dude, just listen to the music.”

I have. And my reaction wasn’t unlike the reaction of the legions of fans and music journalists who were immediately hooked upon hearing the opening riff of “Bright Lights,” the title track of the 2011 EP that changed the reality of modern blues. Among the praise for The Bright Lights EP are the four stars and a top billing from Rolling Stone magazine, a rare occurrence for an EP of a “new” artist.

“I was in New York when a friend told me about [the Rolling Stone review], and it was a big surprise,” Clark told the Current from the Big Apple. In characteristic style, he downplays his own part in the recording’s success. “Maybe it was due to the fact that it had a lot more circulation than my previous albums. I don’t know, but it did change a lot of things for me.”

He's not just Gary Clark Jr. now — he's the new blues messiah, the winner of the “Golden Corndog” (given by Spin magazine for having played in more major North American festivals than anyone else in 2012; besides Thursday’s show at the Arneson Theater in SA, he will be at the AMD stage of Austin City Limits on Sunday at 2:15 p.m.), and the accolades keep coming.

“It’s a bit surprising,” Clark said. “Titles like ‘Savior of the Blues’ and stuff like that …  it’s a little bit overwhelming and I don’t really know how to take that.”

Clark’s unique brand of the blues is neither traditional nor fully contemporary. He's got the Hendrix psychedelia and vocal magic down pat, but on top of the raspy timbre he uses for most of his songs he adds high-pitched soulful style that transports you to the great vocal groups of the '60s; he’s as much blues as soul, but also has an alternative edge and sponge-like ability to receive outside influences that reflect what's on his iPod right now: stuff as distinct as Oddisee, Otis Redding, Little Dragon, and Nina Simone.

“I’m all over the place,” he said. “When people wonder why I say I’m influenced by hip-hop, it's simple — hip-hop is all about grooves and attitude. People will talk about it as ‘disconnecting’ music, but I don’t think it’s a ‘disconnect’ at all. It’s a cool idea. I love music, and I love all kinds of music.”

Clark is the whole package of songs, voice, and chops. As a guitarist, he’s got Buddy Guy’s versatility (equally convincing in blues and rock forms), the subtlety of B.B. King (no needless flashes of virtuosity), the godliness of Eric Clapton (the guy can play), and the urgency and rootsy fury of Derek Trucks. Yet, when he played at Sam’s in September 2011, it felt as a whole new brand of blues led by an electrifying young cat having the time of his life.

“When people show you respect and admiration for what you do it's inspiring and gives me more strength to keep doing what I’m doing,” he said. He returns to San Antonio with the same band he’s been playing with for the last two years: Eric Zapata on guitar, Johnny Bradley on bass, and Johnny Radelat on drums.

Along with his hits, Clark will be presenting songs from Blak and Blu, his first major full-length album (two previous rare LPs are a collection of songs he started writing while in high school). The first two singles (the rocking, soulful “Ain't Messin 'Round,” the dark, heavy blues “Numb”) and three tracks from the Bright Lights EP (an unchanged “Bright Lights” and full-band versions of “Things Are Changin’” and “When My Train Pulls In”) are part of the new recording.

“It’s all over the map,” Clark said about the new album, which includes “everything from low-down blues to heavy guitars and vocals” and has him even playing horns on a few tracks. It’s one of the most awaited albums of the year. Any pressure?

“I hope and I think people are going to react in a positive way, but I’m not dwelling on that,” he said. “I just love playing music. I’m very passionate about it, and I’m just having a good time. All I got is what I got, and I do what I can with it.”