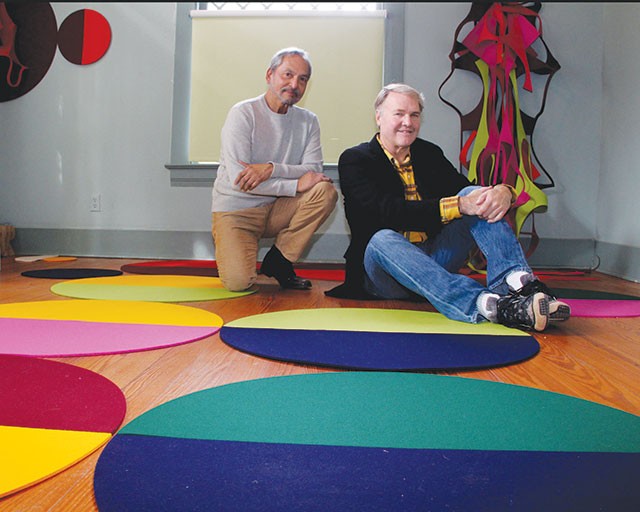 San Antonio native Jesse Amado has entertained and perplexed the local art scene for 25 years. My first exposure to his work was with his tour de force inaugural exhibit at Artpace in 1995. The downstairs gallery installation contained two enamel panels lined with soap, a long galvanized sink filled with water and floating bars of soap, a large freestanding mirror (a recurring theme in Jesse’s work), and a latex “Joseph Beuys” suit (in reference to the Fluxus artist). Of course, my description doesn’t do it justice—it was smart and sentimental at the same time. Jesse’s gift is that he’s constantly experimenting with form and materials, and throughout all his changes, his work remains distinctive and engaging. An Amado piece is currently included in the “Alternate Currents” group show at the Museo Guadalupe at Guadalupe Cultural Arts Center.

When you were growing up in San Antonio, who were the top artists getting all the attention?

Mostly Oscar Q ... he won out for the fourth-grade poster contest, but I won it for fifth- and sixth-grade. My other favorite artist was (Mexican comic actor) Cantinflas.

Did Cantinflas influence you?

Did you study the New York art scene in your youth?

That came in the fourth stage of my life, at age 19. Suddenly, I was standing before a splashed lead Richard Serra piece.

You were on your way to becoming an architect, and you worked under O’Neil Ford. What made you abandon architecture for art?

Mostly the sitting around indoors too much. And probably because I couldn’t handle the power of architecture.

You and I have something in common: We both worked in blue-collar jobs (I still have mine) that are completely unrelated to the art world. When you were a fireman, did you feel you had one foot in the real world?

No, I felt that I had both feet grounded. Art gave me one thing, and firefighting gave me another: a close-up shot of a roaring fire.

I find your artwork fascinating because it deals with the subjects of beauty and romance, and yet it’s very structured and conceptual. Is that a fair observation?

Very close. It deals with the conceptual, the very structured, seduction, then beauty and romance. You were four out of five—very good.

Do you think there’s such a thing as universal beauty?

Everybody loves awesome mountains and fields of majesty. And breakfast tacos.

You seem suspiciously calm and even-keeled. What, if anything, would make you freak out?

Why “suspiciously”? Why not “assuredly”? Maybe an over-poured glass of wine.

If you were somehow able to have drinks with a younger version of yourself, what would you think of him?

I would think, “If only he had better hair,” and, “He drinks way too much.”

What advice would you give to someone just getting their MFA?

Be patient, if you’re in it for the long haul. If not, be suspicious of too much attention.

Art Basel happened last week. How do you feel about the current state of bizarre, money-driven, art-as-commodity trade shows? How do you think it arrived at this point?

The majority of participating galleries are from art centers, which have a lot of money to spend and earn. Celebrities, fashionistas and parties move it along. But that’s OK; I like to shop.

You divide your time between San Antonio and New York City. It’s not hard to see the difference between the two cities, but how are you different when you’re in New York?

I’m anonymous. And I dress better.

Does making artwork come easy for you, or do you agonize over the creative process?

I try not to make it look too easy. Have you noticed how Tony Parker makes it look so easy?

Your artwork seems to contain a big dose of mystery. How important is it that the viewer “gets” your art?

If someone does get it, then they’ve gotten the allure of the ambiguous.