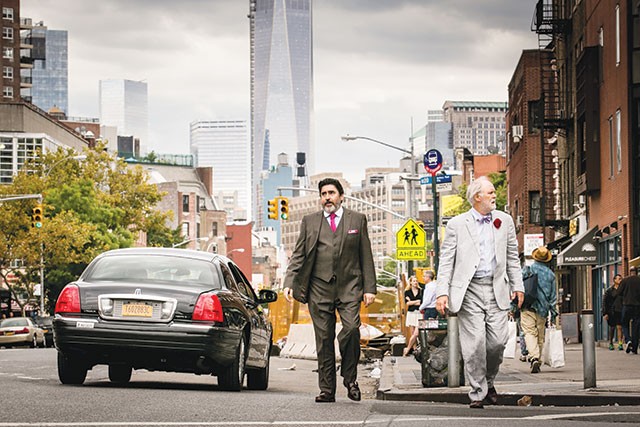 We’ve all had that moment—or that series of moments—when members of our family drive us nuts. And there are two common tropes used to portray that family dynamic in the bulk of feature films. There’s the madcap angle in evidence in the current release This Is Where I Leave You, a movie in which each family member has an outsized personality and is dealing with an outsized personal problem.

Then there’s a movie such as Love Is Strange, which takes the slow burn angle: Regular people who love each other begin to get on each other’s nerves over time. There’s no big blow-up sort of moment. Life happens, and life is sometimes messy.

Love Is Strange has the distinction of being a quiet movie that’s less interested in making grand statements than it is being a quiet portrayal of a difficult time in an extended family’s life. It’s a drama with plenty of humor, and it’s bolstered by two beautiful performances, by John Lithgow and Alfred Molina, as Ben and George, respectively, an older couple whose marriage sets the movie’s wheels in motion. The screenplay, by director Ira Sachs and Mauricio Zacharias, smartly lets tension build as life becomes more challenging for Ben and George after their marriage instead of better.

The marriage is the movie opener, as the couple—together 39 years—hustles to make its own ceremony on time. They’re joined by friends and family, and there’s a delightful reception in Ben and George’s apartment afterward, complete with a sing-along. George handles the piano while Ben leads everyone else with his boisterous pipes. Their niece by marriage, Kate (Marisa Tomei, excellent as always), gives a loving toast that’s nonetheless about her (a telling moment for later in the film), and life seems rosy.

That is, until George loses his job as music director at a Catholic school. The archdiocese, deciding that it reflects badly on the church to have an openly gay man in the church’s employ, has George fired. It’s worth noting the priest firing George doesn’t agree with the decision, but he’s also powerless—and unwilling—to stop it.

Because Ben is retired (he’s 71 and slightly doddering), it falls mostly to George to bring in the money, and that proves difficult. Private lessons won’t cut it entirely, so the couple makes a major decision: They’re going to sell their beloved apartment and crash with family while looking for another. That leads to a whole different set of problems. Ben stays with his nephew, Kate and their son Joey (Charlie Tahan). George couch surfs with a young couple that likes to have blowout parties almost nightly.

Naturally, there are complications, some major and some minor. But the allure of Love Is Strange isn’t just in the complications themselves, or the way the movie resolves them (or doesn’t). The joy is watching pros such as Molina, Lithgow and Tomei live in the screenplay, and in letting Sachs give the actors the room to let the scenes play out as they might in real life and not tailor them for celluloid. It should come as no surprise that the living situations eventually begin eating away at everyone’s polite veneers.

There are villains in Love Is Strange, and they’re appropriately understated while being ubiquitous. The first is organized religion, here embodied by the Catholic Church. If George worked for a more fair-minded organization, he wouldn’t face termination. Secondly, the New York City real estate market is a silent killer. That 400-square-foot apartment in the West Village will run you $2,700 per month. Then factor in utilities, and if it’s in a co-op building, all the fees the board may tack on. In other words, the rent is too damn high.

One of the highlights of Love Is Strange is Joey’s changing relationship with his uncle Ben. At first, Joey is happy to have him around (they share a bedroom with bunk beds). And then the relationship becomes tense, and then it affects Joey’s relationship with George, too.

That relationship is one of many highlights, really. (Tomei’s performance is as superb as Molina’s and Lithgow’s, her face a barely controlled mess of conflicting emotions.) And though the ending is bittersweet, it’s also perfect, and perfectly normal. Love is indeed strange, and it rarely turns out as we imagine it will.