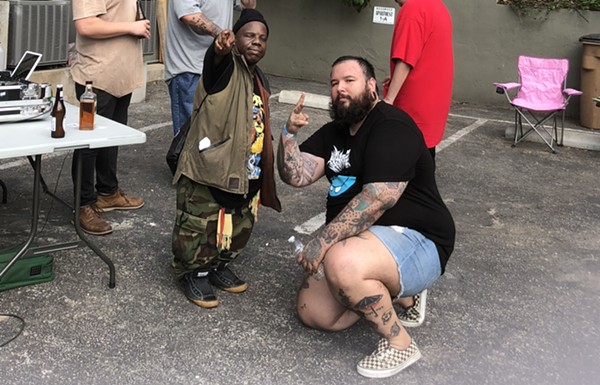 Sometimes the most unexpected people will give you the affirmation you never knew you needed. Sometimes, it turns out, those people are gangsta rappers.

Alongside Willie D and Scarface, Shaw appeared on seven of the eight Geto Boys albums and laid down verses for the group's most popular hits, including “Damn It Feels Good to Be a Gangsta.”

But below that rough gangsta exterior was a warmth, kindness and love for the community in hip-hop.

For those who don't know, I'm a rapper when I'm not a writer, and during South by Southwest 2018, I was invited to perform a set directly before Shaw’s.

Being openly gay, I often speak form the stage about how visibility is important for the LGBTQ community, so I basically out myself every time I’m on the mic. In some spaces that can be uncomfortable, even dangerous. I’ve received threats of violence in the past. Hip-hop has grown and matured since its inception, but there are still folks in the community whose use of gay slurs and homophobic comments create a less-than-welcoming environment.

It's not that I expected Shaw to say homophobic shit to my face, but he did have a lyric from as recently as 2005 that said, “Don't like faggots/Hate politicians/Can't stand snitches/Know the feds listen.”

So, yeah, I didn’t really know what he would think of me being on the lineup once he found out I was gay.

The next thing I knew, the bill was underway and I was handed a mic to start my set. Not every one of my songs mentions my sexuality, but I do have a track that talks about processing my internalized homophobia — basically, hating myself for being gay, then learning to accept myself. Other songs in my set  convey the idea that I’m gay but just as good as any straight rapper.

At the end of my performance, I talked briefly about the importance of LGBTQ visibility in spaces and cultures including hip-hop. Until LGBTQ people are seen and treated equally, I told the crowd, I will continue to make myself visible as member of the LGBTQ community.

I finished talking and handed the mic to Shaw, who’d been watching my set.

“That’s what’s up,” he told the crowd, affirming my message. “That’s what hip-hop is all about — expressing your own individual journey."

"Did I just get the seal of approval from a Geto Boy?" I thought to myself. "Yes, I think I did."

Not that I've ever been driven by external affirmation, but being affirmed as a gay person and as a rapper by someone who’d been in the industry for as long as Shaw felt nice. And it was a little surprising he did it publicly.

After his set, Shaw hung out long enough to cypher with other performers — basically, engage in a freestyle rap session.

As famous as he was, he could have just as easily taken his check and left for home. And I wouldn’t have blamed him — it was hot as hell that afternoon. But he didn’t. Shaw stayed to rap with everybody, like he was a friend from the neighborhood.

Would I go as far to call Shaw an LGBTQ activist? Probably not, but still, that brief exchange — putting his stamp of approval on my journey in hip-hop — is something I will always keep with me. Perhaps it's another side of Shaw fans are unaware of.

Rest in Power, Bill. Thanks for the encouragement,

Signed, a gay rapper from Texas.