Geekdom: The Warm and Fuzzies

July 02, 2012
comment
Beyond Paycheck welcomes back guest blogger Desiree Prieto who recently relocated to the Big Apple! Desiree Prieto has written for a variety of publications, including the Emmy-award winning NBC Chicago Street Team and The San Antonio Current. She’s covered fashion week Chicago, New York and San Antonio, among other fabulously high-profile events. She only gets out of bed to work if it includes writing about fun things like arts, fashion, travel, and her beloved chick-lit. — Laura Carter

“Don’t start a company based just on the warm and fuzzies,” director of Geekdom Nick Longo used to say while I was creating my own nonprofit Gal about the Globe which enables young women to travel. Ironically, it was Geekdom’s “warm and fuzzies,” the relationships I made both personally and professionally, that kept me coming back. And, it is what defines the organization—whether or not Longo wants to admit it. Even though, I’ve just made the move to New York City, writing about Geekdom has been at the top of my to-do list. I was not only one of its first members, and among one of the first girl members to join, but also one of the first members to gain success from Geekdom, and even owe my New York fabulousness to it.

A collaborative workspace of entrepreneurs, technologists, creatives and other stray cats like me, Geekdom sponsors education in the community with programs like Robotics, media workshops teaching HTML and PHP, as well as incubators like 3 Day Startup and TechStars. Other fun events, like the San Antonio Symphony soiree and Poker Night are often held alongside the ping pong table we use when taking a break from all the fun we’re having “working.” Seriously, though, I’m still trying to figure out the Lego robots thing myself, and sometimes I think it must be a ruse to get future grants from the mayor or someone.

However, Louie Pacilli, director of education at Geekdom, tries to convince me otherwise: “I designed game challenges and processes that allow kids to build drones and robots, and then program them as tools to help kids acquire tech literacy, which teaches them self-driven behaviors, collaborative team work skills, and accountability for their own hands-on work.” A former school leader and teacher for 16 years, Pacilli also implemented SparkEd, a concept that uses hands-on learning activities connected to Texas state learning standards, in order to build academic skills, while getting kids excited about the wonders of science and math. “We want to teach kids that Geek is chic and that we can help them create their future today,” explains Pacilli. If programs like this existed when I was a kid, perhaps I wouldn’t want to throw something every time those two words—science and math—were mentioned.

While I am not into Legomania or robots, I participated in 3 Day Startup (3DS); a three-day weekend spent turning great ideas into something real, like a company or an iPhone app. My group, which was dubbed “The Girl Group,” started Renew Couture, an idea created by our group leader Vyjayanthi Vadrevu's love for fashion and sustainability. The e-commerce company with a conscious, encourages emerging designers to recycle the four million tons of annually discarded textiles. Originally, I was intimidated by all the tech-savvy testosterone at Geekdom, as I wasn’t always included in the conversations about macroeconomic spyware and other really brilliant ideas: “Dude, dude. I know. Let’s design an app, and it will play music like no other app has ever played music before. No, dude, you don’t understand. We’ll get a bunch of hot girl interns for marketing.” But at the end of the three days, three days of which I did not subscribe to staying up all night, drinking red bulls, or shooting Nerf guns—rules created by boys, obviously—my Girl Group and I learned so much more than just how to build a company. We learned how to strategize, solve problems, stay disciplined, and also the fact that business, while professional, is a lot like managing personal relationships.

As my Girl Group colleague, Vyjayanthi Vadrevu, business development consultant at Rackspace says very professionally, “3DS allowed me to put my business idea in front of an audience I never dreamed of having. The Geekdom community has been so inspiring and energizing for my mind and spirit. It is truly the Gem of San Antonio." 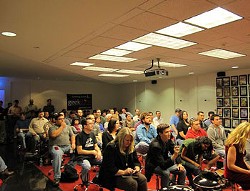 Like 3DS, but way more famous, TechStars ultimately provides funding for ambitious startups from venture capital firms and angel investors. For three months, I frequently poked my head in and out of brainstorming sessions and practice pitches for rising technology companies like Keen, EmergentOne, Distil, and CloudSnap to name a few. Also, I got to go to happy hours and meet some cute angel investors who spend their time fabulously flying in and out of cities looking for the next Google, Twitter, or whatever.

Today I can’t help but keep these emerging tech companies (and of course the cute investors) in my mind as I use technology on a daily basis for my own work—and especially for this story. As I told Longo: “Any Geekdom pictures you'd like to forward along would be great as well. Alternately, I could yank them from the site, provided that you haven't already hired Distil to keep me from scraping them off.” Longo quickly replied, “Swipe what you want from the site.” Although we both know that option may soon no longer be an option. Perhaps I’ll just have to create the company that counters content stealing, if it isn’t already being created. Then I could be CEO and hire some hot boy interns for marketing, and office out of Geekdom.

I suspect Geekdom’s home on the 11th floor of the Weston Centre will not only continue growing, but just as it will be my collaborative workspace when I’m back in the Southwest, soon folks will leave New York for Geekdom—and all for Longo’s warm and fuzzies.

Next up on Beyond Paychecks by Laura Carter—Animal No Kill updates and volunteer opportunities.