Gems as constellations ... on stage 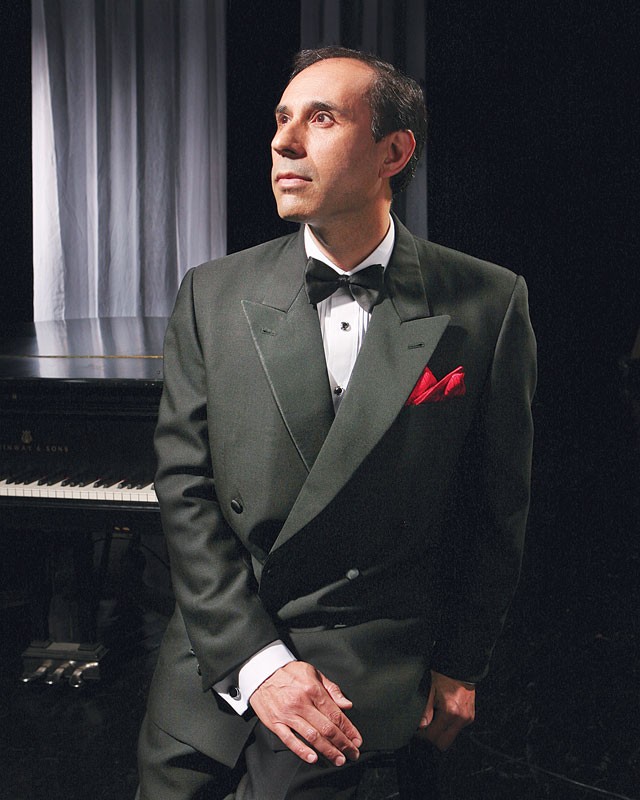 A thin tuxedo-clad man holding a microphone walks onto a sparsely appointed stage, a lit cigarette dangling in his right hand, while the dark, sultry tones of a double bass begin to swell under the floating arpeggios of the grand piano. In a soft baritone voice, the lyrics of the bolero “Veracruz” fill the room. In the 1930s, ’40s, and ’50s this scene was repeated countless times in Mexico City nightclubs, and throughout South America, and Spain, too, when crowds flocked to hear the music of Mexican composer and bandleader Agustín Lara. Last weekend, the magic of that era was brought to Jump-Start Performance Company’s Sterling Houston Theater, when SA actor and singer José Rubén De León reprised Simplemente Lara, his biopic in song and story of the legendary composer’s life that premiered at Jump-Start in 2005.

Backed up by bassist George Prado and pianist Aaron Ellington Prado, the dozen and more canciones that peppered De León’s recounting of Lara’s life story were delivered in fluent, seemingly effortless rendition, devoid of camp — suave. That’s as it should be, as the story itself provided plenty of drama. The son of a physician born at the turn of the 20th century, Lara defied his father’s wishes that he take up medicine, preferring a life in music instead. Lara ran away from his family to play in Mexico City brothels when barely in his teens, where he survived a jealous lover’s attack that left his face scarred. Though gaunt and disfigured, women constantly followed him as he ascended the mid-century world of nightclubs and radio shows, writing over 700 songs and marrying four times before he died in 1970.

De León’s storytelling is animated, filled with pantomime; he rapidly moved from English to Spanish in a flurry of voices — the composer as a young child, as a young man, and female voices too. Lara was obsessed by women and music, and so his music sings of love. Finally, De León speaks with the old man’s voice, boasting of giving so many jewels away that the gems might form constellations.

But when De León sings, it’s all Lara. Held by the song, he falls into the music, as rapt by the song as the audience, seeming not so much to project his voice, but to listen. At times, the music is entirely held by the bass and piano. Played by Aaron Ellington Prado, a recent graduate of jazz performance at New York University, the piano solos were torrents of notes that scintillated like water over rocks, played with a virtuosity that added light to the room rather than mere flamboyance.

De León recalled that he began writing the Lara story after being encouraged by his friend, poet and writer Sandra Cisneros, who had been impressed by LORCA, his biographic piece recounting the life of the Spanish poet and composer Federico Garcia Lorca. This weekend De León will stage that work at Jump-Start, too. If it’s anywhere close as compelling as last week’s performance, it will be a treat not to be missed.