George Nelson retrospective at the McNay 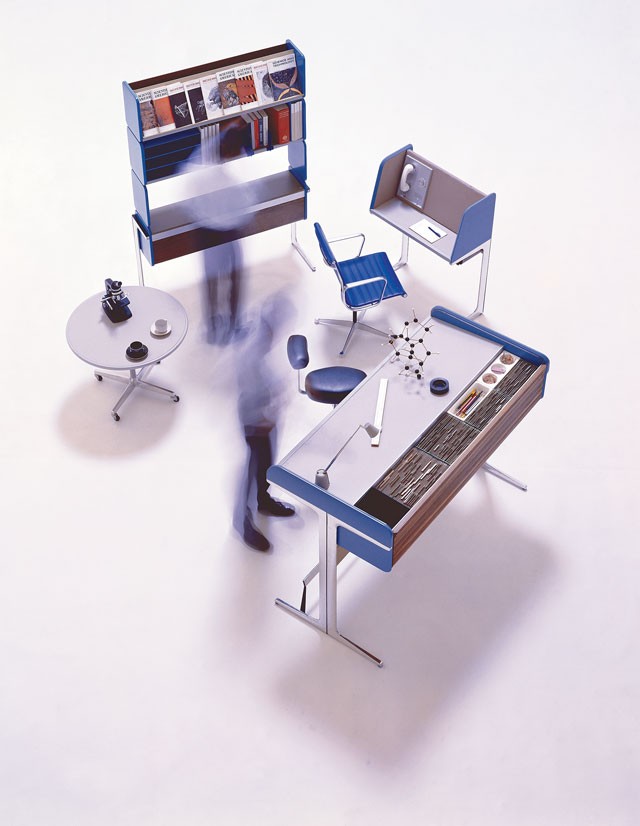 One of the largest and most significant design careers of the 20th century began when a Michigan furniture builder discovered a book about houses. George Nelson (1908-1986), was trained as an architect at Yale, but left his first occupation as a drafter to pursue a writing career, interviewing European architects Le Corbusier, Walter Gropius, and Mies van der Rohe in the pages of Architecture and Pencil Points. In 1945 he co-authored the book Tomorrow’s House, which strove to popularize innovation and functionality, and introduced readers to what are now commonplaces, the family room and the storage wall. The book came to the attention of D.J. DePree, president of the Herman Miller company in Zeeland, Mich., who hired Nelson to develop a line of furniture.

Nelson was a writer with highly tuned drawing skills, but he jumped at the chance to put his ideas into three dimensions. By 1947 he had his own design firm, George Nelson Associates, in NYC, and was the design director of Herman Miller. Through the 1950s and ’60s Nelson maintained his relations with the Michigan company, collaborating with modern icons like Ray and Charles Eames, Harry Bertoia, and Isamu Noguchi to create much of what we know as the Modern Age.

“George Nelson: Architect, Writer, Designer, Teacher,” on view at the McNay, is organized by the Vitra Design Museum of Weil am Rhein, Germany, and is the first significant retrospective of Nelson’s career, presenting over 120 objects that span three decades of creativity.

With Herman Miller and his own company, Nelson created home and office designs for furniture that brought modular design, metal, and plastics to a field that had been dominated by heavy wood pieces. As a component, or module, the same metal legs were joined with tables, benches, desks, and chairs. New organic and geometric shapes were brought out in bright colors. It was as if someone had suddenly turned the lights on, leaving the old Victorian carved legacy back in the dark. He believed that modern people could only live in a modern world — everything should be new, traditions of designing by style were abandoned.

Some of Nelson’s designs are still in production; many are copied. The Ball Clock (1947), one of 130 wall clocks designed for the Howard Miller Clock Company (run at the time by Herman Miller’s son) shared the same mechanism with other clocks in the line, but each had their own face. The Coconut Chair (1956) and Marshmallow Sofa of the same year also brought a playfulness to interiors; just the right décor for a cocktail party. You might not know Nelson’s name, but you know his stuff.

In office design Nelson focused on a new phenomenon — teamwork. His fixtures were among the first to favor workflow over hierarchy, giving the office places specifically for typing, telephone calls, and drawing that were intended to be available to whoever might need them.

For Nelson, everything was a design problem. Before the term “branding” existed, he used graphic and book design to craft his company’s image; film of television productions, books, and models of his exhibit halls at the 1959 American National Exhibition in Moscow are also part of the exhibit. •