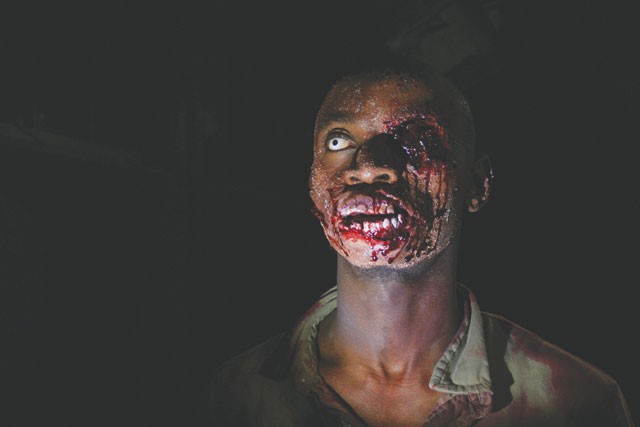 The Dead, which opened October 28 at the Bijou and Santikos Mayan 14, is a unique film in many respects. For starters, it is set in Burkina Faso and Ghana, instead of the usual L.A., New York, or London.

“Stories of zombies originated in the West African spiritual belief system of voodoo, which told of people being controlled as laborers by a powerful wizard, before being appropriated by the movie industry,” said Howard Ford, co-director of the film with his brother Jon in charge of the film’s stunning cinematography.

It is shot in 35mm, like in the good ol’ times and, as Ford said, “with a respect the zombie genre hasn’t seen for decades.”

It is also unique because this is the only zombie movie in which the scares are not necessarily the film’s most relevant quality. Yes, when one of the zombies finally manages to secure his meal of the day (usually some guy’s leg, arm, or nose), the effects are believable and there’s enough blood for three sequels. But, for the most part, all you have to do to avoid the African zombies is walk at your regular speed — these guys are slooooow, to the point of making the zombies in Night of the Living Dead look like Usain Bolt. But it works, because the filmmakers knew what they were doing.

“You lose something fundamental with these so-called running zombies,” said Ford. “When an attacker is moving fast, the scene has no choice but to become an action scene and when you are shooting action, you lose suspense, and suspense is ultimately more powerful.”

The movie’s greatest triumph is its cinematography. In The Dead, you don’t see humans running for their lives and holing up in some supermarket or grocery store: here, the humans are out in the open, and they have to keep moving and changing gorgeous scene after gorgeous scene. It is a fabulous-looking mix of George Romero and Sergio Leone.

The Ford Brothers made their name shooting commercials in England, and they know how to show beauty. The Dead has that pristine, epic look of a National Geographic movie; add zombies to the mix, and you’re witnessing something new and horrific. Yet, despite the gore, you won’t be able to take your eyes off the screen.

The plot is simple: An American soldier, the only survivor of a plane crash, shows up at a beach full of zombies and starts running for it. He meets an African soldier who has his own shit to deal with, and they help each other attain their goals, and… Forget about the story and prepare for a trip unlike any other. •