Get a Real Job, San Antonio: Be a Bingo Card Verifier 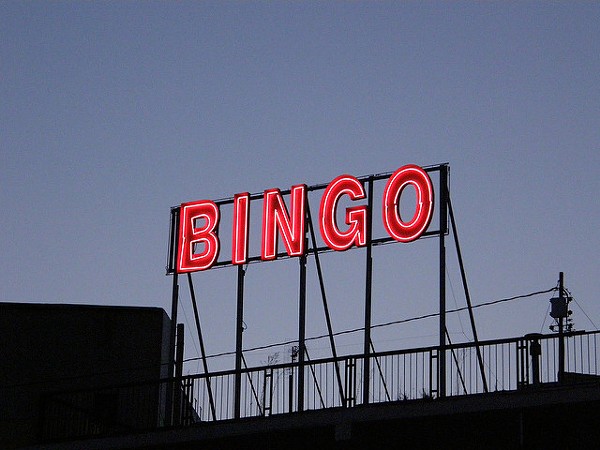 Whether you've got one or you need one, jobs can be a drag. So in a San Antonio Current feature, we scan local job boards to find a real gig you could have that you may never have thought of.

This week: verify four corners, blackouts and Texas T's as a Bingo hall worker, advertised by this Craigslist post.

Bingo halls are surreal places. During gameplay, they're silent except for the periodic barking out of "0-34!" or "I-16!," and the simultaneous squish of stampers as players edge closer to the top prize. Everyone's on edge. It's one of the few places, besides a kindergarten classroom and the movie theater, where shushing is a common and effective practice.

And they come in all shapes and sizes. I once played Bingo in an old grocery store. It was this enormous, cavernous space lit by long fluorescent lights. Giant murals of eggplants, cartons of eggs and ham hocks lined the walls. Everyone knows that the next sheet is going to be the lucky one. Just a couple more bucks, another beer or two, and fate will shine upon them.

Now, you have the chance to be part of the magic. Golden Bingo is hiring 20 workers for its 11 locations. Here's part of the full ad:

Currently looking for friendly and energetic individuals to fill retail positions at our bingo halls in San Antonio.

USHERS Ushers are responsible for walking around the hall and selling pulltabs to customers along with assisting with problems and verifying Bingos. Ushers have a tip pool that is split evenly . Ushers are currently making 22 a session (2-3) sessions a day per location and anywhere from 30-80 dollars a night in tips, plus their base pay.

We have 11 Locations all over San Antonio, playing morning, afternoon, night and midnight and we are hiring for all these halls

No highly visible tattoos and piercings (other then ears). Bi-lingual (English & Spanish) is a plus. Must be good with math. Applicants must have no felonies on their record and be able to pass a state issued background check.

Over $20 per session seems like a pretty good gig. And as long as performing basic math is a hurdle you can clear (admittedly, I'd have to think twice about it), you've got to like your chances, given how many folks they're hiring.

The Daily Bingo Get a Real Job