Get Revved for The Reverend Horton Heat 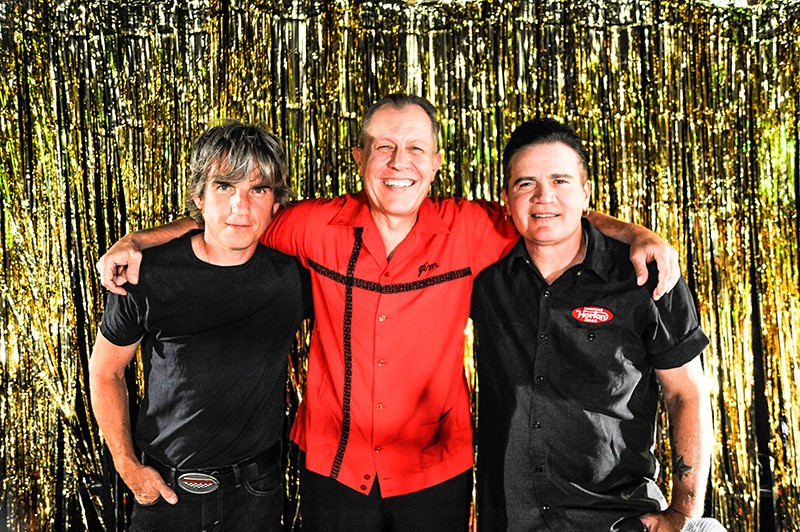 The Rev, as he’s affectionately known amongst his scores of admirers, has held a coyly concealed place on the body politic of rock ‘n’ roll for nearly 30 years. Like a much-loved, but well-hidden, tattoo of a pompadour-ed Frankenstein skull or a ’50s custom T-bird with a buxom, scantily clad Rosie the Riveter straddling the hood — only making itself visible when skinny-dipping, love-making or on particularly drunken and daring occasions — Jim Heath (guitar, vocals) and Jimbo Wallace’s (upright bass) matrimony of city-billy lounge music and pink pedal pusher punk rock has net them a devoted following of hepcats, swingin’ chicks, rockers, rollers, punks and squares alike, even rearing its greased coif in the mainstream on occasion.

A true Americana band, the cosmic cooperation of Heath’s lightning-fast fingers and Wallace’s thunderclap bass slap has hypnotized audiences since their start in Dallas’ Deep Ellum neighborhood in the late 1980s. With skills and a hankering for fun matched by few, them Heat boys could teach, and have taught, modern rockers a thing or two about a thing or two. The sincerity of their delivery has secured them — through soundtracks, video games and guest appearances — an enviable spot as the psychobilly tramp stamp on the hearts of the urbane and tasteful, as well as the hick-ish and hayseed.

Known throughout suburbia as hero to Cartoon Network’s Johnny Bravo, composers of the digit-tangling Guitar Hero II master-level track “Psychobilly Freakout,” and for supplying tunes for several video games in the Tony Hawk’s Pro Skater franchise, The Reverend Horton Heat have built a cult following elbowing in between the likes of Kenneth Anger, Ricky Nelson, Link Wray and Jack White. If the trio was embodied in a single pop culture reference or Hollywood amalgamation they’d either be Billy Bob Thornton exiting a limo onto the red carpet of the 2000 MTV Movie Awards with Angelina Jolie still drying on his member and clinging to his side, or the love child of Iggy Pop and Johnny Depp in Cry-Baby (if we had been so lucky as to have witnessed such a miraculous thing).

For fans of songs in the key of the switchblade, fuzzy dice, the guttural exhaust of a ’50s Chevy and all things leopard-print and crushed velvet, church service has begun.


The Reverend Horton Heat feat. The BellRays and Lords of Altamont