Get Up, Stand Up: 'Pride' is a great feel-good movie 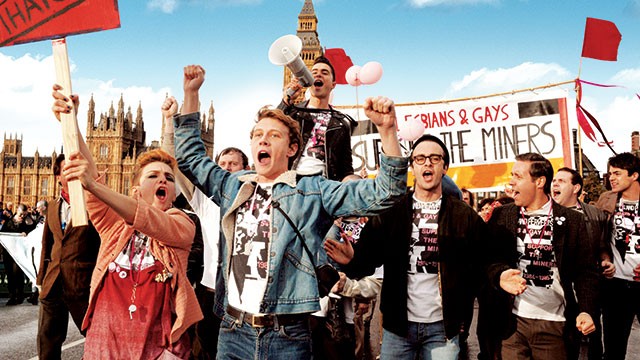 Feel-good films are awful. Just terrible. They manipulate. They pander. They use treacly strings or scruffy children (or determined animals) or put-upon losers rising above the muck in an effort to make audiences cry. And worse, they’re often blatant about it, as if you can hear the producers, directors and screenwriters off camera, saying, “You WILL feel their torment. You WILL feel their struggle. And you WILL cry when, after they’ve gone through the ringer, everything turns out OK.”

Think Rudy and War Horse and Shawshank Redemption. Worst of all, think about the screen adaptation of Les Misérables.

And yet 2014 has done something rather remarkable. It has produced at least two sappy feel-gooders that, despite being cloying and drippy, are also sublime. The first is Jon Favreau’s wonderful and stakes-less Chef. The second is the charming Pride, directed by Matthew Warchus and written by Stephen Beresford.

Pride details a little-known (to Americans, anyway) event, the 1984-85 National Union of Mineworkers strike in protest of then Prime Minister Margaret Thatcher’s efforts to close 20 British coal mines and the support the mine workers received from a group of gay and lesbian activists in London. The tiny group, self-dubbed Lesbians and Gays Support the Miners (LGSM), is led by Mark Ashton (a real person and played in the film by an excellent Ben Schnetzer) and has about six or seven other members. Those include Jonathan Blake (Dominic West, a long way from The Wire), his partner, Gethin (Andrew Scott), closeted-to-his-family Joe (George MacKay) and Steph (Faye Marsay).

Mark thinks that if he can find a group of miners willing to accept their support, that group will in turn support gay rights. And wouldn’t you know it? He’s right. It just so happens that after having dozens of phones slammed in its ear, LGSM finds a group of strikers in Wales that really, really needs help, and if the screenplay is to be believed, the woman on the Welsh end of the phone doesn’t quite understand just who she’s accepting help from.

Of course, fact versus fiction isn’t really important. This is, after all, a movie. And the movie sends the miners’ representative, Dai (Paddy Considine, quite good), to London to accept LGSM’s offer to help. And lucky for LGSM, Dai is not only the nicest guy in the world, but he’s also smart enough to know that he needs aid (in the form of cash and willing protesters) from anyone willing to extend it. As a show of good faith, he gives a thankful speech at Jonathan’s favorite bar—Dai is the only straight person there—and the patrons approve. It’s so corny, unbelievable and so absolutely effective that it makes me want to embrace all future sentimental crowd pleasers (but not quite).

The underlying theme of Pride is in finding unity and fellowhip, in finding people with whom you can share your struggle and draw strength. It’s not groundbreaking, but Pride is so appealing, it’s hard to resist. From West’s performance—he makes a great lush turned activist with the best line of the movie, “God, I miss disco”—to Schnetzer’s, Pride is filled with actors getting across the idea that when we help someone who needs it, we have a friend and ally for life. And because, in this case, both sets of friends are underdogs (which, regarding gay rights in the UK in 1984 is an understatement), it gives the movie some gravitas where it desperately needs it.

Lest anyone think the movie underplays the ugliness of anti-gay sentiment, the Joe character is an audience surrogate, leading us through his journey from trepidation—he barely attends the 1984 pride parade at the beginning of the movie—to wholeheartedly embracing his truth, culminating in his confident march in 1985. There are other scenes that depict the harsh reality of equal rights struggles. Gethin suffers a savage beating (mercifully off screen), LGSM’s headquarters gets its share of bricks thrown through the windows and Joe is confronted by his parents, who try to convince him that being gay will lead to a life of loneliness and being an outcast.

And finally, there are the Welsh miners, led by a restrained and wonderful Bill Nighy, and ably supported by Jessica Gunning and a sharp-tongued Imelda Staunton. It’s delightful that most of the Welsh people open their arms to LGSM, and more delightful still watching Nighy and company board the group on its many overnight visits to the countryside.

You can look at the history books (or see Pride) to know how it all turns out. If all feel-good films were this well done, what a miracle that that would be. Expect it to be a player during awards season.